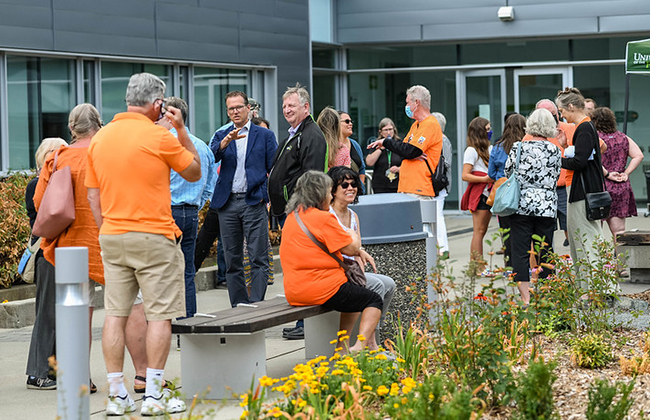 It was a time of reflection and growth when dozens gathered to unveil UFV’s new Shakespeare Reconciliation Garden on the Chilliwack campus at Canada Education Park on Friday, July 16.

Though the latest incarnation was planted recently, its roots run very deep.

If you were involved in Chilliwack’s arts community during the 1990s and 2000s, chances are you remember the Shakespeare Garden on UFV’s former Chilliwack North campus with fondness. Just outside of the theatre’s green room, a cobblestone walkway was enclosed by an enchanting garden that included everything from lush bushes to beds of roses to medicinal plants. It was a vibrant yet serene place where performers would unwind, staff would have lunch, and people in the community would read a book.

“The former garden was the result of a very creative time at UFV,” says Melissa Walter, an associate professor in UFV’s English department. “It was an interdisciplinary garden and was a really beautiful space on campus.” 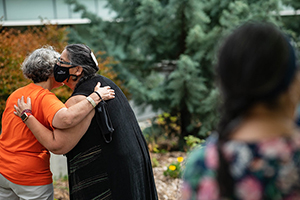 When UFV moved most of Chilliwack-based programs and operations to the current Chilliwack campus at Canada Education Park in 2012 and moved the theatre department to UFV’s Abbotsford location a few years later, the future of the Shakespeare Garden remained undecided for nearly a decade, leaving a void in the local community.

In 2017, an interdisciplinary team, in foundational and ongoing guidance from UFV Indigenous Affairs, and with support from Campus Planning and Facilities Management, began to work on a course that would design a new garden that would return to Chilliwack — this time on the new Chilliwack campus at CEP.

The focus of the garden and the project was reconciliation.

“Shirley Hardman (Senior Advisor on Indigenous Affairs) says that we ‘make reconciliation every day. We know how to do it,’” Walter said. “The garden was intended as one example of that, and also as an opportunity to contemplate processes of reconciliation in all forms.”

According to the planners, the garden aims to create a space of beauty, healing, and contemplation — a space for quiet enjoyment and a space to reflect on reconciliation.

“The garden is located on the traditional territories of the Sto:lo people. One of the things that came up immediately was that we wanted Indigenous voices and vision to inform the creation of the new garden,” says Walter. “Guest speakers included Elders, and other knowledge keepers shared with us knowledge of the land, of plants, and of approaches to reconciliation.” 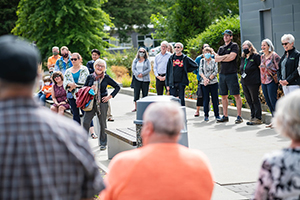 The new garden features indigenous plants as well as cultivars from other parts of the world, growing together in S’ólh Téméxw (the name for the territory of the Stó:lō people. In English, it can be translated as ‘our world’ or ‘our land’).

The new garden also features rows of orange flowers planted to honour the tragic discoveries of approximately 200 bodies found in unmarked graves on the Kamloops residential school site this year.

“Dr. Jacqueline Nolte (then Dean of the College of Arts) had the idea of adding 215 of a certain flower to honour the children and their families,” says Walter. “Then, Brian Minter (former UFV Chancellor) passed on to us that Indigenous communities were suggesting orange flowers. We chose orange flowers that are perennial and that attract hummingbirds, butterflies, and other pollinators.”

The new garden design and construction to date is the result of two interdisciplinary studies courses, one called Reconciliation and Redesigning the UFV Shakespeare Garden CEP Campus, and the other called Planting Reconciliation. Grounds Supervisor Christine Jones (who was also involved in the creation of the original Shakespeare Garden) consulted with the classes and contributed to the design of the new garden, as well as committing groundskeeping resources to sustain the garden.

The garden was financed partly through the Fund for Innovative Teaching, a fund administered by the Provost and VP Academic office. There were also donations from the College of Arts, the office of the VP Administration, Minter’s Country Gardens, and Kato’s Nursery. A first-year student in the Indigenous Academic Success Cohort in the Planting Reconciliation class wrote a successful grant application that funded many of the berry bushes in the garden.

“It’s been wonderful to see the support this garden has received and we thank all the contributors and donors. I’m grateful and delighted that the garden is now also supported by Peace and Reconciliation Centre funding, consultation, and internship opportunities through PARC’s innovative Collaboratorium,” says Walter.

Students worked iteratively to develop designs, and the first class made a presentation of the concept of the garden to the Indigenization Committee of Senate, which was received well. The Planting Reconciliation class further developed the garden design, with key direction and inspiration from the UFV Biology department and with input and support from the groundskeeping crew. The second class sourced plants and dug up the turf before COVID hit and the planting had to be delayed.

The classes were also supported by UFV Indigenous Student Centre, Indigenous Affairs, and the UFV English department, as well as guest speakers from the UFV’s Agriculture and Geography departments.

This June, a group of volunteers planted the garden, with the guidance of support of the groundskeeping team, and on July 16, nearly 70 people gathered to officially open the new Shakespeare Garden on the Chilliwack campus at CEP. The event was kicked off with Indigenous drumming and a song. Attendees were then given an informal tour and listened to speeches about reconciliation and the historical significance of the garden.

The garden is still in the first phase. The design includes bulbs that will be planted throughout the upcoming fall and spring, as well as one or two additional structures.  The Shakespeare Reconciliation Garden blends past glory with a future ambition to create a more unified community.

But at its core, it’s a place where students, staff and the community can sit back, take five, and enjoy the priceless moments of serenity.

“The garden is just beautiful,” says Walter. “I hope it continues to grow and develop and be loved.” 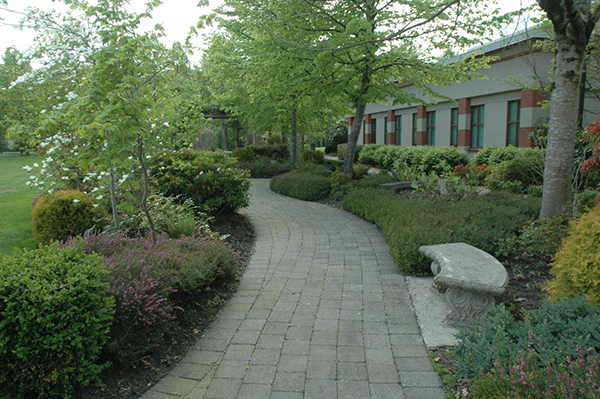