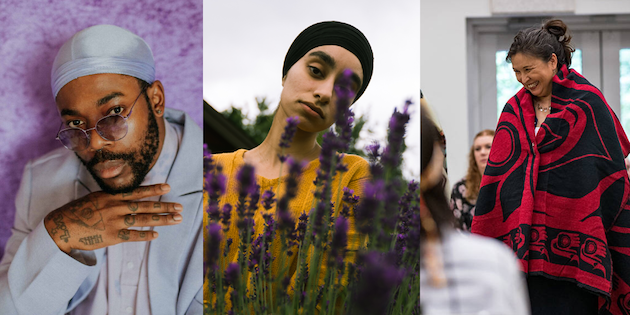 Mauvey, Jasmin Kaur, and Peggy Janicki will be featured at Keep on Steppin’, a panel discussion on anti-racism.

For Sharanjit Kaur Sandhra, the co-chair of the Race and Antiracism Network (RAN) at UFV, the work is not done. Not even close.

After a historic year for social justice reform globally, Sandhra still sees a contradiction in her own backyard. On the one hand, the rise of RAN membership and interest, as well as the hiring of UFV’s first Director of Equity, Diversity, and Inclusion has signaled progress. On the other, she believes race relations still have room for improvement.

“I think there’s a shift in the university taking place and people understand that we have to listen to the experts in equality if we are going to move forward,” said Sandhra, who is also the Coordinator at the South Asian Studies Institute at UFV and sessional history instructor.

In corroboration with the International Day for the Elimination of Racial Discrimination on March 21, UFV will run a pair of separate virtual anti-racism events next week.

RAN will host a panel discussion titled Keep on Steppin’ on Wednesday, March 17 at 2 pm. It will focus on the urgency of anti-racism work in the UFV community and the importance of staying engaged.

Sandhra expressed concern for students who feel that they have experienced racism at UFV, and wants to help build a culture where that doesn’t happen. She hopes students, staff, and faculty alike can learn from the experiences of the panel, which consists of three people of colour from the Fraser Valley: Mauvey, an award-winning R&B artist based in Chilliwack; Jasmin Kaur, a UFV alumna and internationally recognized rising poet and writer; and Peggy Janicki, an Indigenous teacher and community leader.

“This is actually about activism and the power you all hold within you to enact change through the arts and education,” said Sandhra, who envisions the panelists using their platform and creativity to spark ideas for change. “We’re in this moment of, ‘let’s be bold, let’s be fearless, we’re not going to conform to any sort of boxed idea of what you think anti-racism work is; what academia is.’”

“It’s an opportunity for mentorship,” she added.

While Keep on Steppin’ will focus on experiences and perspectives of the creative panel, a second event, Revealing Systemic Racism and Inequities in BC, on Thursday March 18 at 1 pm will take a more data-driven approach to racial equality. The event is hosted by UFV’s Community Health and Social Innovation Hub (CHASI), the South Asian Studies Institute (SASI), and RAN.

“We can change our practices and how we think about research, data collection, and use from one rooted in colonialism to one based in relationship and caring,” said Dr. Katherine Watson, a CHASI faculty associate and an associate professor of Social, Cultural & Media Studies at UFV.

“It provides a way to gather knowledge in a human rights framework that includes the participation of marginalized communities and reveals systemic inequities.”

The virtual event will explore a recent report from British Columbia’s Office of the Human Rights Commissioner (BCOHRC) that researched systemic inequalities in BC. The panel will consist of three representatives from BCOHRC who each had a hand in developing the report: Kasarai Govender, who is BC’s first independent Human Rights Commissioner; Gwen Phillips, First Nations Data Governance Initiative champion; and Trish Garner, BCOHRC’s Executive Director of Research and Policy.

“The panel includes three highly respected leaders in the province who are advancing a transformative approach to research, knowledge, and the involvement of community members in data collection,” said Watson. “The audience will learn about their approach, and why this report is so timely.”

Dr. Martha Dow, the Director of CHASI, highlights the importance of data-driven approaches to understanding inequality in addressing systemic oppression.

Memoirists will share writing tips at UFV event
One year in — a COVID-19 milestone: responses from the UFV community