Dr. Eric Davis arrived at UFV at an exciting time.

Davis, who winds up his term as Provost this month and will return after an administrative leave as Special Advisor to the President, took some time recently to reflect on his 27 years at UFV and his decade as Provost and Vice President Academic. Davis started as a history instructor at UFV, and also served as History department head and Dean of Arts.

Part of a large cohort of new instructors hired in 1992, soon after what was Fraser Valley College received university-college status, Davis got in on the ground floor at a time when the institution was reinventing itself.

Newly renamed the University College of the Fraser Valley, the young institution was taking on the challenge of adding third- and fourth-year courses and developing bachelor’s degree programs, first in partnership with established universities and later on its own.

Administrators, faculty, staff, students, and community members worked together to plan the new degrees. And the general feeling at UCFV, as these plans began to unfold, was that it was vital that the university-college honour its roots and remain connected to its community.

“I learned soon after my arrival that a post-secondary institution could be a university and still be very community-oriented. This was a very novel experience for me,” recalls Davis, who had earlier studied and taught at several older and more traditional universities. “As I settled in I grew to feel an obligation that whatever I did professionally, I should be keeping our community in mind.”

He was also struck by the cooperative spirit of those working together to build a new kind of university.

“This was by far the most collegial place I had ever worked, and it remains so. There was an egalitarian ethos. From the beginning here I learned that you could navigate through dramatic change without fracturing the sense of community if you kept our institutional core values front and centre.” Those core UFV values, as Davis defines them, are a student-centred approach, community service, and acting as an agent of transformation in the lives of our students and the development of our communities.

“We have remained absolutely committed to students, community, and the role we play as a site of transformation. That’s why we are here.

“We’ve never stopped changing at UFV, but we are able to navigate that change because we haven’t lost sight of those values. And now those values are coded into our Coat of Arms and our new mission statement, so I am happy to see that they have stuck.”

Another key strength that he sees as enduring over the decades has been the UFV community’s ability to integrate and collaborate across disciplines, faculties, service areas.

“Just like, as the saying goes, it takes a village to raise a child, it takes a whole university to graduate a student,” he notes. “Working together across what other places would perceive as barriers has allowed us to do so. We’ve had to change a lot as we grew into being a university, but we’ve been pretty successful at changing without fracturing.”

During his time as Provost, Davis has been a leader in a variety of initiatives that helped define the type of university UFV has become.

“All the achievements I am associated with were team efforts, but if it was important for senior administration to show support for an initiative, I was willing to be front and centre. Some of those efforts have made us a leader, nationally and internationally.”

The initiatives that Davis is most proud of include the creation of university-wide Institutional Learning Outcomes, the ongoing Indigenization process, the Vision 2025 process that led to the creation of the five goals that inform the 2016-20 education plan, the City Studio community partnership, and the creation of the new Centre for Experiential and Career Education. “We were the first in the province and one of the first in the nation to formally define our own institutional learning outcomes, in 2012,” he recalls. “We knew change was coming in the education field and we wanted to be in front of the changes, not have them dictated to us. The ILO development and the Vision 2025 process that followed helped us achieve that.”

UFV’s ILOs state that all graduates will possess a variety of abilities, such as effective communication, collaborative leadership, problem solving, critical analysis, and professional respect.

“These really resonated with our university culture. I hear people referring to them all the time. They are succinctly formulated, inspiring, and absolutely the right goals for our university.”

Experiential education is at the forefront of many of the changes that Davis helped to foster.

“Students are choosing universities based on experiential learning opportunities, from international internships to local co-op placements. Options like CityStudio are great for student recruitment and retention because they teach students that they can change the world and make a living while doing so. It combines the passion for changing communities with the know-how to get it done.”

CityStudio is a partnership with the City of Abbotsford that sees classes from a variety of disciplines take on challenges provided by the City, and then proposing solutions that are highlighted at semi-annual showcases called Hubbub.

“We are one of the few universities in Canada to take part in the CityStudio initiative, and we are doing it so well that the founders of City Studio point to us as a model program and the mayors of Chilliwack and Mission have asked us to expand it to their communities. CityStudio Chilliwack starts this fall.”

Centre for Experiential and Career Education

UFV recently combined its Career Centre with functions and programs connected to experiential education to create the Centre for Experiential and Career Education (CECE).

“CECE is the brainchild of VP Students Alisa Webb. I was happy to collaborate with her and others to turn the idea into reality.  We will be a real leader in this area. Traditionally career centres are a bit of an afterthought but we want students to be thinking critically about how their studies link to many possible future careers from year one.” Davis says that UFV is recognized across Canada as a leader in Indigenization.

“So much of my time as Provost was inspired by our commitment in that area. I felt a real elevated obligation to pay attention to Indigenization. We hosted several milestone Indigenous events – the Indigenizing the Academy conference in 2012, the Indian Residential School Day of Learning in 2013, and the Witness Blanket exhibit, ceremonies, and lectures in 2017. And everything we do at UFV now takes the Indigenizing aspect into account.”

He notes that being so involved in Indigenization initiatives transformed him.

“Opening your heart and mind to the Indigenous community and what it needs from a university really changes you. I had the honour of twice speaking in the longhouse and it’s an honour I did not take lightly.”

Of course, taking on a leadership role at a university comes with challenges.

“I became Acting Provost in 2009 – just after the recession hit and the provincial government announced there would be no growth FTE funding. It was a real challenge trying to protect jobs while accomplishing our goals.”

Davis notes that faculty recruitment has become more of a challenge over the last decade or so.

And on the labour relations front, “it’s harder to maintain harmony” than it was when UFV was a smaller, less complex institution.

And he’s experienced some frustration in the degree-approval process.

“The program approval process at the provincial level can be cumbersome, and it’s very disheartening when a program that we have worked hard on developing is not approved and we have to go back and make more revisions.”

Even living up to our commitment to our communities can be challenging, Davis notes.

“People in our diverse communities need to see reflections of themselves in what we do and the people who are doing it.  That’s why my new role will focus on the recruitment and retention of Indigenous faculty and staff.”

But the biggest challenge is a pleasurable one:

“Simply staying abreast of all the wonderful things happening all around the university has been a challenge. I want to know it all so I can tell the world!” While Convocation is always a highlight for Davis and the initiatives described above brought many highlights of their own, he was also inspired by research accomplishments of our undergraduate students that are showcased at the annual Undergraduate Research Excellence awards dinner.

“There have been many great achievements by our students celebrated at those awards. One that stands out is when geography student Justine Cullen won an international competition in third year that is usually won by graduate students. She was one of the first Canadians and the first undergraduate to win the prestigious Farouk El-Baz student award from the Geological Society of America for her honours research.”

Davis’s time at UFV has been characterized by the democratization of educational planning and student and alumni involvement in university affairs.

“We wanted the entire university community to be part of our planning. Students are giving us their tuition dollars and alumni and community members support us through taxes. They should expect some say over the quality and type of education we offer.

“I wanted us to get ahead of change and be a leader, and we are. And our students and alumni are our best ambassadors. They get good jobs, build great careers, and really stand out when they continue their studies at other universities.

“Our lasting impact is lived out by our alumni as they transform their communities and workplaces and impress other universities.”

Looking back and looking forward

The Dr. Eric Davis of the 1990s was a history instructor who did not see administration in his future. But he has enjoyed being part of the UFV journey in a leadership role.

“I also did not envision UFV moving into a position of leadership in the post-secondary sector so quickly. But much of the reason for this is our community-orientation. In an era of continually declining government funding, a university that wants to lead or be successful must rely on support from its communities and, therefore, must be community-relevant.  This is in our DNA, so our core values have placed us in an enviable position. Community-focused and learner-centred universities like UFV are the future.” 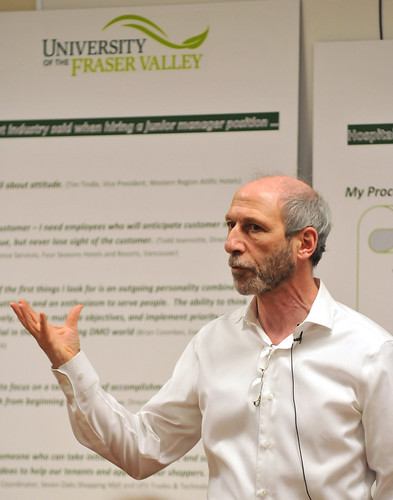 One Response to Eric Davis looks back on decade as Provost