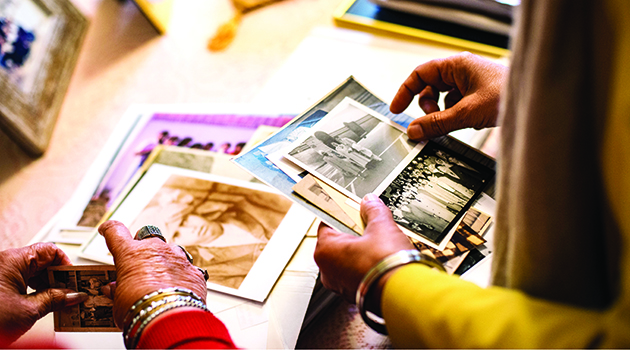 The turban unwinds like stories he’s told in living rooms across B.C.

Another early morning, another chance to change history.

Fueled by a grant secured by the South Asian Studies Institute in collaboration with the Royal B.C. Museum (RBCM), Ishpreet Anand’s role as regional coordinator for the Punjabi Canadian Legacy Project (PCLP) saw him interview more than 100 people with tales of emigrating from India’s northern region over the past century or so. 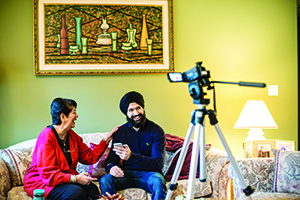 Each interview was filmed and then meticulously transcribed by Ishpreet and other research assistants with the goal of building a foundation that will transform textbooks across the country.

“The stories are Canadian stories,” he says. “It’s the rich history of people from Punjab.”

A 2016 UFV BBA graduate from Chandigarh, India, whose previous employment includes a stint at Abbotsford’s Dashmesh Punjabi School, Ishpreet is exploring the back chapters of his own diaspora (dispersion of a people from an original homeland).

At the Royal B.C. Museum, curator Tzu-I Chung notes an inadvertent theme as she hustles past the blanched replica of Captain George Vancouver’s H.M.S. Discovery.

“The institution in the past really focused on the impact European settlers had on the area, but there’s a greater and more accurate story to be told,” she says, moving quickly for a photo in the museum’s logging exhibit that showcases an early BC industry that hired strong men from India willing to work for a better life. 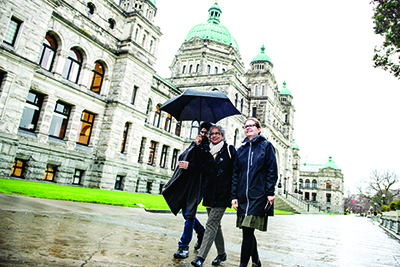 Tzu-I points out that the impact of other immigrant and Indigenous peoples are featured with increased prominence in recent times at the museum. Most recently, the museum published Kwäday Dän Ts’ìnchi: Teachings from Long Ago Person Found. It also hosts symposiums, including Performance as Medicine: Indigenous Performance Art. And visitors can explore Indigenous artifacts while hearing different languages in the First People’s Voices exhibit.

The items aren’t on display as the museum evolves its focus away from simple artifacts and towards historical items with particular significance.

Tzu-I hopes to bolster a limited Punjabi-Canadian collection through the legacy project partnership.

“Because of our relationship with Satwinder and UFV we’re hoping to find what we need to help preserve and portray a wider scope of what carved British Columbia into the cultural shape it’s in today.”

To accomplish that, Ishpreet spent weeks in places like Prince George, Golden, Kelowna, Vancouver, Surrey, Victoria and Duncan, interviewing people from the Punjab.

While visiting cities, he’d conduct workshops explaining the project on the first Monday of his stay, usually inside a Gurdwara, the traditional place of worship for Sikhs where people from all denominations are welcome to join for prayer or a meal.

It was there, on the first day in those cavernous halls, that Ishpreet would begin prospecting.

“I wanted to know when they came to Canada, what their journey was like, what struggles they faced, how they adapted to Canadian life, and what has changed, especially since the 1950s and earlier.”

Unearthing those early experiences isn’t all positive. Crime, deception, even reconciliation with Canada’s Indigenous peoples are being addressed.

Still, there is a lot to be proud of, as Punjabi-Canadians played a key role in early logging and sawmill operations and other economic and cultural activities in the young province of British Columbia.

On one jam-packed trip to Victoria, Ishpreet and Satwinder spent two hours in the living room of long-time residents Raj and Buncy Pagely.

Unlike many families, the Pagelys meticulously documented their family’s arrival from India.

Their collection is somewhat of a goldmine for the legacy project, and might find its way into a local or regional museum or archives.

“We’re thankful to share our pioneer history of our families, but I think this should’ve been done a long time ago in British Columbia and I hope this project will be carried on,” says Buncy, bracelets chiming as her finger punctuates the thought.

“People forget that even getting to Canada was a struggle,” he says.

“Quite often the last you would ever see of your relatives were their backs as they boarded that plane.”

His route was unusual — most sailed from southern India with stops in Hong Kong, where a Gurdwara housed and fed countless emigrants over the decades.

While the grant driving this project ended in February 2018, the partners hope the information gathered will create a more accurate historical record in schools, museums, and websites across B.C., when more funding becomes available in the future.

“We want there to be an ongoing process of recovering and recording our history,” says Satwinder. “It’s time for a more inclusive approach to British Columbia history and for it to be included in our school curriculum. It’s time this story was told. And the fact that UFV’s South Asian Studies Institute is playing such a key role in telling it is testament to the impact that we have in the Fraser Valley and beyond.”