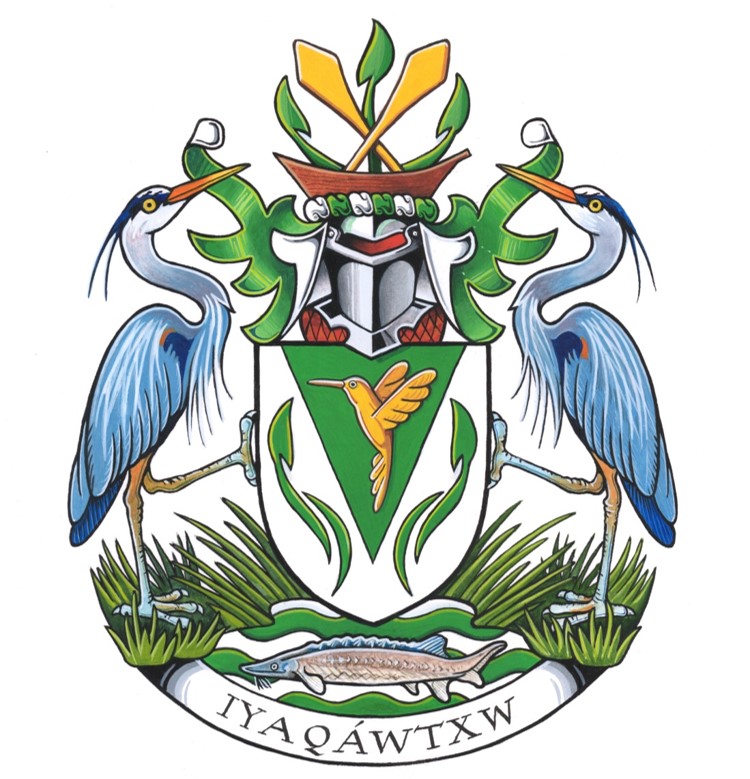 UFV’s new coat of arms features symbols of Stó:lô culture, local wildlife, and elements of the Fraser Valley landscape. The coat of arms was unveiled by Chancellor Gwen Point, President Mark Evered, and Miramichi Herald, Manon Labelle at a public ceremony held at the UFV Aboriginal Gathering Place on June 5.

Officially granted by the Canadian Heraldic Authority under the authority of the Governor General of Canada, a coat of arms is a form of personal or corporate identification, like a logo or wordmark, but it is designed to be timeless and symbolic.

Chancellor Point detailed the cultural significance of the incorporated symbols during the ceremony including the motto written in the Stó:lô language Halq’eméylem.

“It’s gratifying and appropriate for the UFV coat of arms to hold many of the symbols representing the values of the Stó:lô people and the Fraser Valley community,” said Chancellor Point. “UFV is a place of transformation – in both knowledge and character – and this new symbol reflects the inclusion of Indigenous values and concepts while emphasizing a new path forward together with the UFV community.”

The concept was designed by Bruce Patterson, Deputy Chief Herald of Canada. The coat of arms represents the mission and mandate of UFV and incorporates symbols drawn by artist David Farrar. In addition to helpful input from several UFV stakeholders, including Chancellor Gwen Point, a local expert in Halq’eméylem also ensured an appropriate motto formed part of the final design.

Retiring President Mark Evered was determined to ensure the university had a suitable coat of arms prior to his departure from UFV.

“We have been granted a coat of arms that captures well our values – our respect for the environment, the First Peoples of our region, and our commitment to transformative, collaborative, and sustainable development through education, research, and service.  It speaks to the spirit of partnership that has guided our journey and reminds us of our responsibilities going forward. All captured in a beautiful work of art.” Coat of Arms symbols explained (from bottom to top of illustration at left, as documented by the Canadian Heraldic Authority and Chancellor Point):

The creation of the arms was a collaborative process resulting in a symbol that will be used widely in many official capacities by the university.

“UFV was very fortunate to have great support from the Heraldic Authority during the creative process,” said Al Wiseman, University Secretary. “They not only provided many good ideas, they also were open to some of our ideas and incorporated them into the design, truly enabling us to have a final product that reflects well our institutional and local cultures.”

UFV also received an official design for a new flag and badge which also reflect the design elements found in the coat of arms.