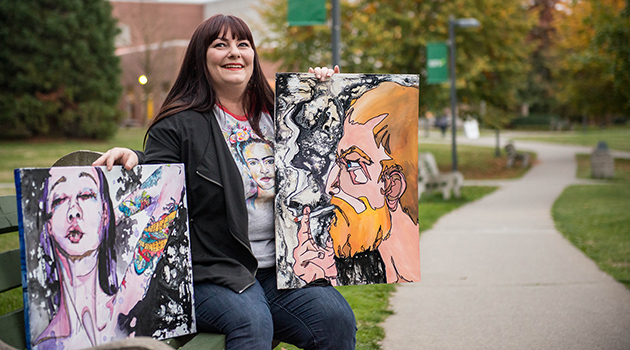 Inspired by her 30 kids and sometimes smeared by squeegee or fork, the paintings created by UFV’s 2016 Young Distinguished Alumni Award winner Shannon Thiesen make their mark in more ways than one.

She was the very last student to join her UFV Teacher Education cohort – accepted only two days before classes began. Now she’s the program’s first graduate (2011) to win UFV’s YDAA.

“If you asked me if I was a teacher or artist I wouldn’t be able to tell you either one – I’m both,” she says.

But it wasn’t always that way.

While copying the drawings of a Grade 4 classmate, the art spark slowly caught fire with Shannon, but the considerations of a practical career inexorably pulled her in a different direction.

She started with journalism at Carleton University before settling into a major in English literature with minors in law and women’s studies. From there she jetted to Japan, teaching private-school English.

The bellows began to blow.

“During my time in Japan, I realized I was meant to teach,” she says. “It took me that long to discover my passion.”

After returning to her hometown of Powell River, Thiesen didn’t have the money to start university — but she had the drive and the support.  She applied to UFV, where her partner James was enrolled in Aviation.

“I had no business getting into the teaching program at first. They helped me with upgrading my math, helped me to figure out my finances, and gave me the opportunity I needed.”

She credits UFV instructors for inspiring her to become a great teacher for her own students at the Abbotsford School of Integrated Arts (ASIA) North Poplar campus, teaching a Grade 4-5 split class.

“We’re creating these 21st century learners; the majority of their jobs that we’re trying to get them ready for haven’t been invented yet. So what we’re really trying to get kids ready for is how to be creative, how to think critically, how to work as a team, how to connect with our community.

“At UFV my teachers were organized, supportive, talented, and passionate about social justice. All the things I try to be.”

Thiesen recently flew to New York City with a colleague to help an underprivileged school though a program called Sing For Hope. She carefully transported wooden discs decorated by all 450 of ASIA’s students who had drawn, painted, or burned pictures and messages onto the wooden surfaces. She then glued the discs all over a piano and painted the whole façade to look like a big, colourful moose. It was displayed in Central Park before being donated to a Brooklyn school without music funding. They were the only international artists participating, with the majority of travel costs coming out-of-pocket.  Her goal was to show her students that, “creativity takes courage.”

The moose piano was one of many pieces inspired by her kids. Shannon paints with her students during class, and then breaks out the brushes when she gets back to her apartment.

“When I get home I get so excited to paint, and if I didn’t teach I don’t know if I’d have that inspiration.”

A talented and award-winning artist, Shannon uses oils and acrylics to paint “anything organic that lives and grows and breathes”.

She even re-purposes her students’ discarded art, collecting clippings from the classroom garbage and recycling bins and pasting them onto canvas, then painting fantastical backgrounds for the kids’ characters to live on. Called Imagination to Reality, the exhibition was a great success at Kariton Gallery in Abbotsford, where students visited to see their drawings re-imagined with new perspective.

Shannon is a live art veteran, winning Art Battles in Chilliwack and Abbotsford before being crowned the winner at the provincial championships. From there she flew to the Canadian championships in Toronto. In most battle rounds she paints with a squeegee (“because, why not?”), but once used a fork in a blind contour painting contest at Abbotsford’s The Reach, where her art has been sold and featured.

The pieces are in even higher demand after winning a Fraser Valley Arty Award in Visual Arts this year.

“People always said don’t get too passionate about art; go get a real job and keep it as your hobby. What I realized later is a lot of success I’ve had in my life has been attributed to art, and education has really been the conduit to how I pay for it.”

The success is no surprise to those who know her.

“She’s a ‘big picture’ person who plans, implements and sees through to the end of all of her artful endeavors,” Trottier says.

“Shannon does not miss an opportunity to ‘go the extra mile’ both in her personal studies and community projects outside of the cohort.”

“Shannon’s creativity and outstanding talent shines through her involvement in the visual arts, both as a teacher and as a practising artist,” he says.

“She has been wholly committed to both leadership and service in the arts and in the learning communities that she is connected with.”

When the brushes are washed and canvas dried, Shannon hopes her experiences encourage people to give themselves a chance at success.

“There are people at UFV to help you through your studies. They want you there, they want to teach you and they want you to learn. I’ve learned that lack of money or direction isn’t an excuse. It doesn’t matter where you’re coming from, whether that’s a tiny town like Powell River or the big city.”

Up next for Shannon is February’s Battle of the Brush, where two artists paint live on the same canvas at the same time for 80 minutes in Vancouver.

“Live art is thrilling,” she says.

“It helps people understand what went into creating art — the time and excitement that goes into brushstrokes. Sometimes people say they like a piece but don’t know why. I feel if someone saw the art being created they’d say ‘I know exactly why I like it’.”

“I hope I’m bringing people that kind of joy.”