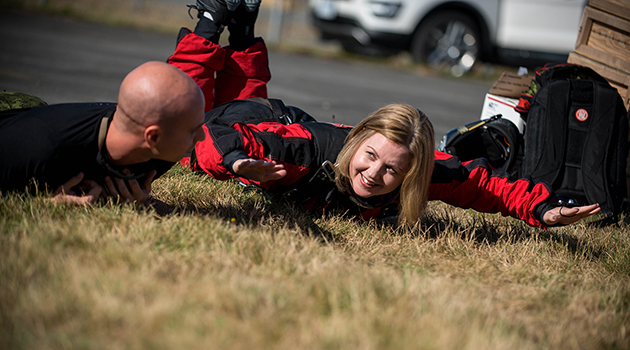 UFV University Relations Executive Director Leslie Courchesne listens to last-minute instructions from her SkyHawks tandem partner before jumping out of a Twin Otter plane at 12,000-ft.

A proud sponsor of the famous airshow, the University of the Fraser Valley once again opens the hatch for public tours of its enormous Boeing 727 used to train Aircraft Structure Technicians. And what better way to check on the giant jet’s progress than leaping from a perfectly good airplane?

“We love being a part of the community and that’s why we’re so excited to be sponsoring the Abbotsford International Airshow this weekend,” Courchesne said with both feet firmly on the ground.

She’s also encouraging spectators to get a rare hands-on feel behind the big Boeing’s yoke.

“Be sure to come to our 727 and get your picture taken in the cockpit!” A father takes a photo of his son in the cockpit of UFV’s 727 during the 2015 Abbotsford International Airshow.