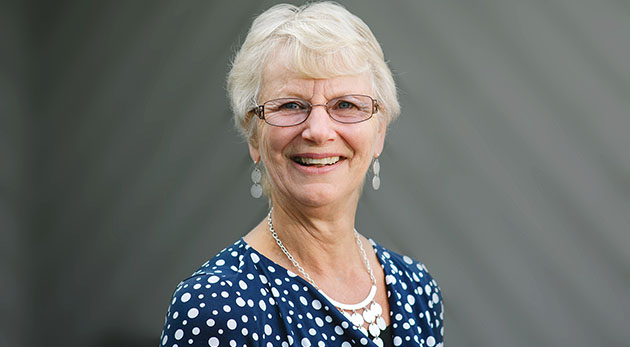 That’s how Terry-Lynn Stone summarizes the effect that her time at UFV (then UCFV) had on her.

She was a stay-at-home mother with four children with 20-year-old credentials when family circumstances influenced her to seek a return to the workforce.

She planned to start with childcare courses, and came home in tears after attending an information session about a childcare program offered by another university.

“I said to my husband: ‘I can’t believe I thought I could handle university.’

“He didn’t talk about it for a week, and then said: ‘I never thought you were a quitter.’ That was enough to get me back on track.”

She sought the help of UCFV educational advisor Mandy Klepic.

“I told her that I didn’t know anything about succeeding at school, and she recommended an intro to college course offered by the counsellors that made it all much less intimidating.”

She continued her childcare studies at what was then UCFV, and took English 105 as part of the program.

“The instructor was very encouraging with regards to writing skills and told me I could do anything I wanted. So I changed the focus of my studies to English and earned my Bachelor of Arts degree with a major in English.”

Eventually she became editor-in-chief of alive magazine and editorial director of Teldon Media.

All along, Terry-Lynn felt the need to give back to the institution that had given so much to her.

She was the first elected student representative on the UCFV Board of Governors in the 1990s. Now she is back for a second stint as an appointed member, commuting from Kamloops for meetings.

She also worked on a project researching the viability of teacher training at UFV, and was founding chair of the UCFV Alumni Association (before it was a registered society).

Terry-Lynn is now the executive director of the Kamloops Brain Injury Association. She is active in her community and has volunteered for several nonprofit organizations including the Canadian Cancer Society, the Editors’ Association of Canada, the Canadian 4-H, and the United Way. She is a Rotarian and a member of the Stephen Lewis Foundation’s Grandmother to Grandmother group.

During her time as a UCFV student she was awarded the Governor General’s silver medal and the Outstanding Arts Student award. She won the Distinguished Alumni award in 2005.

“Everybody was so good to me at UFV,” she recalls. “I am absolutely blown away at being one of the UFV Top 40 alumni. Sitting on stage at Convocation as a UFV board member, I see so many bright and motivated students graduating and becoming alumni. To be chosen as one of only 40 outstanding alumni is a huge honour.”