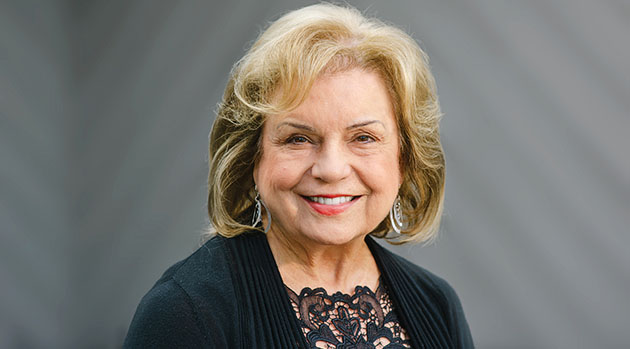 So says Myrtle-Anne Rempel, a successful businesswoman and artist who took Fine Arts courses in the early days of Fraser Valley College and one of UFV’s Top 40 alumni.

She earned her diploma, but enjoyed her studies so much that she took more courses than was required and spent four years there.

It was a busy time in her life, as she juggled work, raising children, and supporting her husband’s successful business ventures.

“I was a very busy person, but because I wanted so desperately to attend college, I was delighted that I could do so in my own community,” she recalls. “I was busy, but I managed to fit in a few courses per year.

“Mircho and Janina Jakobow, the original fine arts instructors, were such an inspiration. Mircho was such a kind, gentle, and wonderful instructor. I owe my whole career to them. They were great mentors.”

Since completing her studies, Rempel has found success as an artist, mostly doing abstract-style paintings. She achieved signature status (which is only granted to committed artists with consistent output and superior ability) with two Canadian and one American artist associations (SFCA, CSPWC, NWWS). She has had art exhibits in several communities throughout BC, as well as in Ontario, Arizona, Australia, and Mexico.

Myrtle-Anne seeks to evoke emotion from her viewers as light, shadows and textures play across her colourful paintings to create many different moods.

Her work is included in many private, corporate and government collections in Canada, USA, Ireland, Austria, France and Africa.

Rempel came to UFV (then FVC) as a mature student, as her earlier dreams of pursuing post-secondary education had been thwarted.

“I really wanted to go to university after high school graduation but my dad said to me: ‘Myrtle-Anne, I have six boys to educate, and you’ll just be getting married.’”

Her artistic breakthrough came about because of a twist of fate.

“I had a bad car accident, and had to be very sedentary for a few years. Painting was something I could pursue during this time.”

In addition to her artistic endeavors, Rempel is a successful businesswoman, serving as vice president of the Sandy Key Group and sitting on the board of governors of four of the family companies.

Her community work includes serving on the Board of Governors of the Crystal Gala Foundation, the Federation of Canadian Artists, and The Reach Gallery Museum since its inauguration.