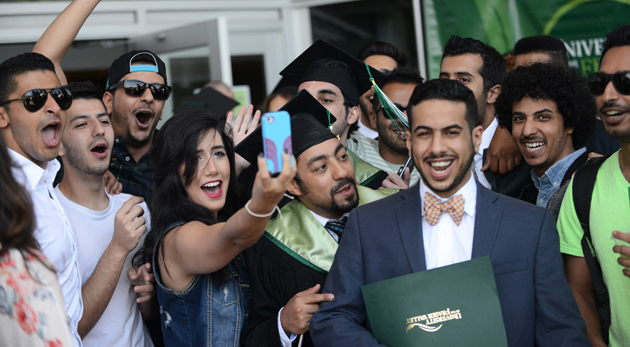 It’s always a festive atmosphere at the Abbotsford Centre for UFV Convocation. There were four ceremonies spread over two days this year, and more than 2,550 credentials awarded.

Chancellor Gwen Point presided over ceremonies this year for the first time since being installed in February. She told the assembled graduates to take time to appreciate friends and family who have supported them, as well as faculty and staff who invested time and energy in their education.

“They have all helped prepare you to stand up in the world and become a contributing member of society. As you go out to embrace the next stage of life, remember you have a part to play in helping others learn and grow,” she said.

“My grandmother told me we should share what we know, that what we learn has no value unless we pass it on to others. So share away! Use your knowledge in your career, and also mentor and help others. Give back. Be a leader in all areas of your life. Be an educated, thoughtful, contributing member of your community. And a proud UFV alumni! We will all be stronger for it.” 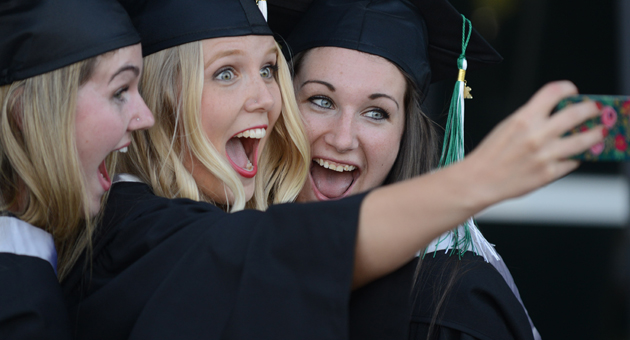 UFV President Mark Evered welcomed the audience to Convocation, congratulated the graduates, and shared his three “R’s” for success: a combination of rebellion, responsibility, and respect.

“Let’s start with R for Rebel. Be at least a little rebellious out there. Not destructive rebellion, but rebellious in a skeptical, critical, constructive and creative way. Poke the status quo as you ask new questions and seek new solutions to new and even old problems.

“The second R is for Responsibility. There is nothing that any of us do that does not have consequences for others. And as adults we are responsible for those consequences, good or bad, and whether we like it or not.

“My third R is respect. Respect for others, their lives, their cultures, their beliefs, their contributions to our lives. Respect for life, respect for the places we live and play and grow our food; well, you can develop the list as well as I can.

“None of us, not anyone, anywhere, anytime, has or will achieve anything meaningful on our own. Yes, we need to challenge the ideas and actions of others, but in a spirit of respect.”

The Friday morning ceremony featured a surprise on-stage marriage proposal to one of the graduating students.

Nursing graduate Tony Chae was one of four student speakers at the ceremonies. He talked about how different choices he made along the way – such as the choice to travel to Belize for a nursing course – impacted his education.

“It will always be hard to know whether or not these choices were the ‘right’ ones. But what I do know, is that making these choices leaves me with no regrets. I have gained knowledge and have had new experiences.”

Bachelor of Business Administration graduate Nathan Abrahams was the speaker at his ceremony. He reminded his fellow grads to always be thankful.

“When life is going well it’s easy to be thankful. But even then we sometimes forget to give thanks. It’s easy to take things for granted, especially the little things. I encourage you to be intentional. Express your thanks to those you interact with. Go out of your way to let people know why you are thankful for them.”

BA in Criminal Justice grad Sukhvinder Mangat, who spoke at the Friday afternoon ceremony, recalled being told by one of his professors, MLA Darryl Plecas, that university would change his life.

“I was reluctant to believe this. How can simply completing a series of courses result in such a transformative change?” Mangat recalled. “Well, four years later, I can tell you: he was right. My life truly has been changed by my educational experience at UFV. I feel very fortunate, honoured, and humbled to have received several personal accolades. I have enjoyed a level of success beyond my wildest dreams and to an extent unimaginable just four years ago.” 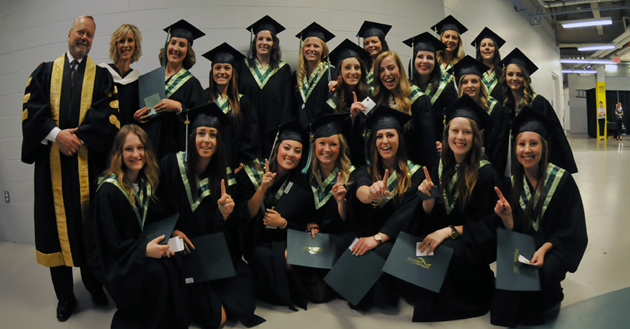 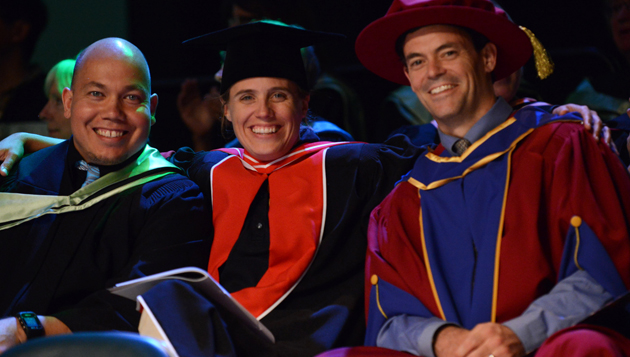