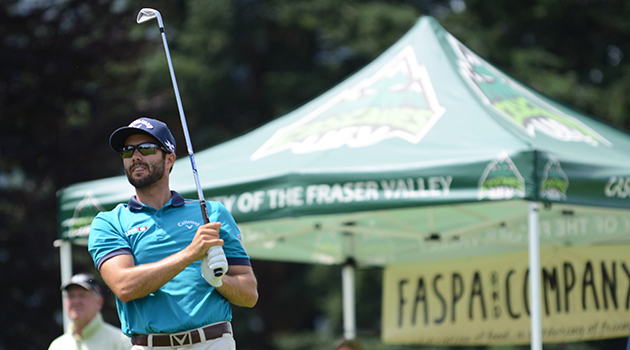 Stinson, a Mission product, lit it up at Chilliwack Golf Club, carding an eagle and eight birdies en route to a seven-under 65.

That left him two shots clear of Hadwin and Chris Lee, who finished tied for second at -5. James Lepp (-3) was solo fourth, while other notables included Ray Stewart (+2, T15) and Taylor (+3, 18th).

The UFV golf program joined forces with the Vancouver Golf Tour to stage this year’s edition of their annual fundraising tournament, and Stinson’s share of the $5,000 VGT pro prize pool was $1,200.

“Kevin’s a quality player, and everybody around here knows that,” Cascades head coach Chris Bertram said. “He’s had a lot of good success in the past, so no one’s ever surprised to see Kevin go out and light up a golf course. But considering the strength of the field, it’s a pretty impressive feat.”

The event, which included a dinner and silent auction, raised roughly $25,000 to support the UFV golf program. The presence of local golf luminaries like Hadwin, Taylor, James Lepp (the 2005 NCAA Div. 1 individual champion) and Ray Stewart (former PGA Tour player and 1994 Dunhill Cup winner) was no small factor in the tournament’s success.

Hadwin and Taylor are both rookies on the PGA Tour this season, with earnings of more than $1.6 million between them. Hadwin was the Web.com Tour money list champion in 2014, and Taylor notched his first PGA Tour win back in November at the Sanderson Farms Championship.

“We’re just so incredibly grateful that those guys are so generous with their time,” Bertram said. “Their lives now vs. three or four years ago when they would come out to this event is so different, with so many demands on their time. The fact they’re coming back and playing in this tournament, it’s humbling. It says a lot about Nick and Adam and the kind of people they are. They’re class individuals, and they have deep ties to this community.

“It was a really great celebration of Fraser Valley golf. In that room, you had the past, the present and the future of golf in this area. There was a really great feeling at the dinner, and a lot of funny banter in the room during the live auction. It felt like a really special gathering of the golf community at all levels.”