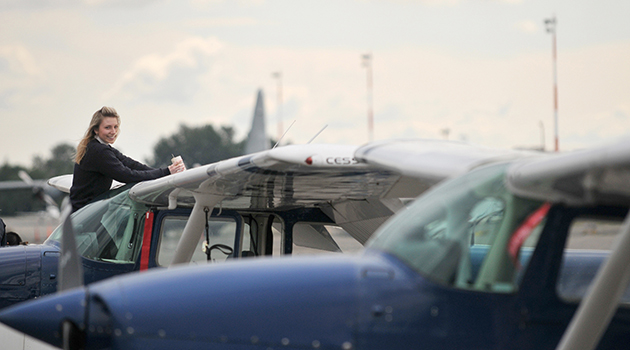 UFV’s Aerospace program is a gold sponsor of this weekend’s The Sky’s No Limit – Girls Fly Too! event, expected to draw up to 10,000 people from across the Lower Mainland.

Free flights and family fun are on tap at the Abbotsford International Airport for this annual event, part of an outreach initiative founded by B.C. pilot Kirsten Brazier in 2012. Plane rides are offered free of charge to females who have not flown in a small aircraft before, plus participants can try their hand at many aviation and aerospace activities, and civilian and non-civilian VIPS will be on hand with aircraft to explore.

In addition to helping a support a great initiative, the event is an excellent opportunity to highlight UFV’s Aerospace Centre’s Aircraft Structures Technician program, says Applied and Technical Studies Director Rolf Arnold. The Aerospace Center will be open for two info sessions on March 11, at 5:50 pm and 7 pm. An airplane ride will be awarded as a prize for attendees.

“We’re always excited to help shine some light on the aerospace industry, but this event is very special,” says Arnold.

“Combined with the fact there’s almost no heavy lifting, aircraft repair is also unique in the trades world in that it appeals to as many women as men. Almost everything’s aluminum and light,” he says, adding other materials include Kevlar, carbon fiber, wood and fabric.

Out of 24,505 professional pilots in Canada, only 1,356 of them are women. Out of 19,601 aircraft engineers, only 560 of them are women. Less than three per cent of the technical positions in the Royal Canadian Air Force, such as pilot or maintenance technician, are held by women.

“It would be easy to conclude that women are unwelcome in these fields. Instead, studies have shown that a common perception persists that aviation and aerospace careers are reserved for men,” Brazier says. “Since society observes mostly men employed in these fields, this perception is reinforced.”

The Sky’s No Limit – Girls Fly Too! outreach events aim to change this perception by welcoming women to the airport and giving them a hands-on introduction to aviation and aerospace.

“The first flight experience is so incredibly amazing that we just have to share it,” she adds. “It’s often the catalyst that is needed to inspire interest in aviation and aerospace, whether as a pilot, air traffic controller, aircraft mechanic, or aeronautical engineer. Opportunities are endless.”

The event is about education as much as it is about inspiring girls and women; everyone — male and female alike — is encouraged to participate or volunteer.