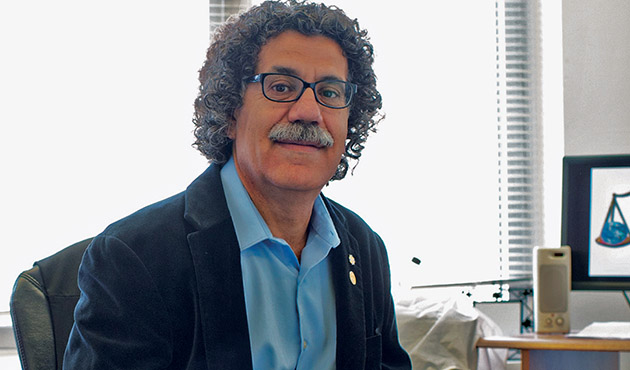 Winner of UFV’s Distinguished Alumni award in 2011, his tireless fight for oppressed and vulnerable people is partially inspired by his own trials and tribulations. At the age of 18 he was a political exile from Kurdistan. He knocked on the doors of 13 countries before gaining temporary refuge in Italy and a permanent home in Canada.

Now a successful Calgary lawyer, Shirzad launched his post-secondary studies at UFV (then UCFV) at the age of 30 in 1992, finishing his BA at Simon Fraser and earning his law degree at the University of Calgary.

Still, he never forgot his roots.

“UFV is very close to my heart because of the people,” he said.

“I made friends for life there, both among the students and the faculty and administration. The faculty had very high standards. People think about universities such as UBC as prestigious, but sometimes the best university experience is right in your own backyard.”

While at UFV Shirzad co-founded a chapter of Amnesty International, and was a frequent visitor to management and board meetings, bringing forth ideas about how to improve the rapidly growing institution.

Dr. Eric Davis, who is now UFV provost and vice president academic, taught Shirzad back when he joined UFV as a history faculty member. When Shirzad received his Distinguished Alumni award, Davis’ praise was unwavering.

“Shirzad set and broke the mold for student leadership,” Davis said. “He was a tireless supporter of students’ success and rights, in general, and of disadvantaged individual students, in particular… I don’t use the word ‘tireless’ lightly. The man never slept… And he was inspirational. His strength, determination, passion, intelligence, selflessness, energy, hard work, infectious enthusiasm, and sense of humour transformed the life of many a student who, because of his example, discovered within themselves the motivation and capacity for leadership and commitment to a community and world beyond their particular story.”

Shirzad’s office door is open to countless refugees fleeing persecution from every corner of the globe. He often assists them for free and even pays their court costs out of his own pocket.

He received the 2008 Distinguished Service award in Pro Bono Legal Service from the Law Society of Alberta and the Canadian Bar Association. In 2009, he was inducted as a member of the Alberta Order of Excellence.

“I think that it’s our duty to help people, no matter where they come from,” he said.

Shirzad lives in Calgary with his life partner, Yvette Kroeker, whom he met soon after coming to Canada in 1984.