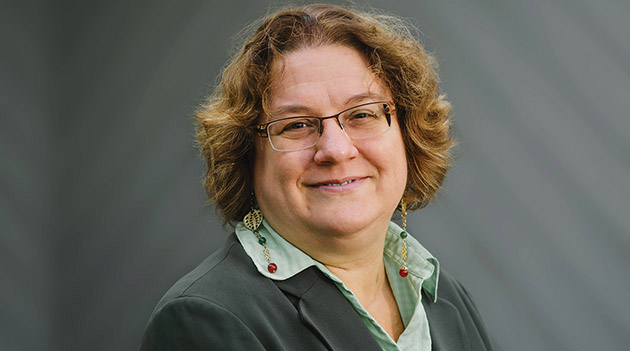 Rebecca Anderson (Dip ’92), now a lawyer with her own firm.

Rebecca Anderson didn’t know where her educational journey would take her when she began taking media and communications studies and other humanities courses at UFV in the early 1990s.

She earned her MACS diploma in 1992 and continued on to Simon Fraser to finish a BA degree.
When she finished that she worked in the Fraser Valley, for the United Way and the Mission Literacy Association. But she was intrigued by the experiences described by her friend and fellow UFV alumnus Shirzad Ahmed, as he attended law school in Calgary.

Soon enough she enrolled at the University of Calgary’s Faculty of Law, commuting by Westjet regularly while the family stayed behind in Abbotsford.

Earning her law degree at age 42, Anderson is an example of what a “mature” student — one who didn’t start university straight out of high school — can achieve.

“I wouldn’t be where I am today without UFV. I had to start with upgrading. When I began my studies I didn’t know the full value of education,” she recalls. “UFV made me fall in love with education. It opened my mind and my eyes to a much bigger world than I was aware of previously. It was the perfect place to begin my education. It was a special place, warm and friendly, and very welcoming.”

“Experience has taught me that every client and every case is special and unique in some way. I am dedicated to helping each client to see their way past the current situation, assisting them as they enter a new chapter in their life, and preparing the way for them to go forward on their own — one step at a time.”

Rebecca was nominated by one of her closest supporters — Robert, her husband of several decades.

“Her whole career began by taking a few courses at UFV once our youngest daughter began kindergarten,” he says.

She says she was surprised and humbled to be named one of the Top 40.