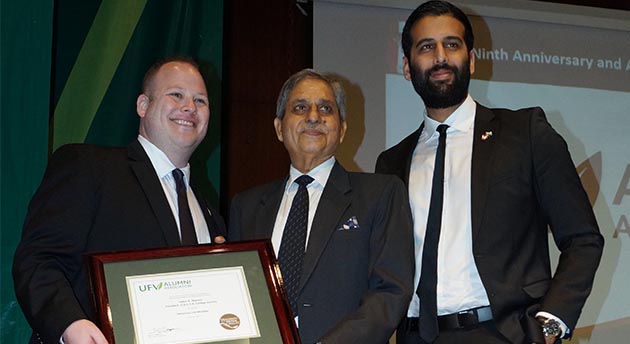 Yesterday evening at the annual awards ceremony for UFV Chandigarh, Justin P. Goodrich, Board Chair of the UFV Alumni Association, announced to a crowd of nearly 500 guests – including students and their parents – the official establishment of the association’s first international chapter.

The evening, which was attended by numerous dignitaries including Canada’s Counsel General and Britain’s Deputy High Commissioner, marked the ninth anniversary of UFV’s campus in Chandigarh. To date, the program has nearly one-hundred graduates, with approximately sixty-five percent of them remaining in Canada, with the balance returning home to India.

Nav Bains, Associate Vice-Chair, who is also a member of the UFV delegation currently in India noted the importance of ensuring the association “does all that it can to not only foster life-long relations between UFV and its alumni, but also the importance of leveraging the experiences of our Chandigarh graduates to help support and invest in future generations of students, regardless of where they end-up in the world.”

Looking ahead, the Chandigarh campus is looking forward to exponential growth, with a projected 300% increase in the coming year. “This is exactly the right time to launch an alumni chapter in Chandigarh, as we want to ensure the infrastructure is in place to accommodate our future alumni” said Goodrich.

The evening also included the appointment of Mr. Upkar Sharma, Principal of S.D. College – UFV’s local partner in Chandigarh – as an Honorary Lifetime Member of the UFV Alumni Association. “Mr. Sharma has been a remarkable partner for UFV, and has been a driving force behind initiating an alumni chapter” notes Goodrich who, along with Bains, presented Mr. Sharma with his certificate and the association’s new academic hood.

UFV President & Vice-Chancellor Dr. Mark Evered noted that “we are delighted with the establishment of this new chapter. Our Chandigarh program is continuing to grow in size and quality and we celebrate and appreciate the success and support of our alumni.”

Looking ahead, Bains notes that “this is the beginning of not only a Chandigarh chapter, but also the beginning of a new chapter in the growth of our alumni association; one that we believe will not only unite alumni, but created additional support for current students.”