Convocation refers to a gathering together, and thousands did so on June 12 and 13 as the University of the Fraser Valley celebrated its graduates at three ceremonies at the Abbotsford Centre. Watch a video of our Convocation ceremonies here.

More than 2,100 individuals graduated with more than 2,700 credentials this year, over the two days of ceremonies.

That meant a lot of handshakes for several UFV officials, including President and Vice Chancellor Mark Evered, Alumni Association Chair Justin P. Goodrich, and Chancellor Brian Minter (who was presiding over his final convocation ceremonies, as his term expires this fall). 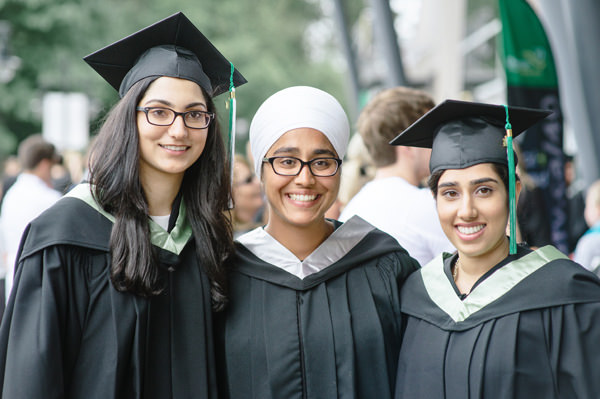 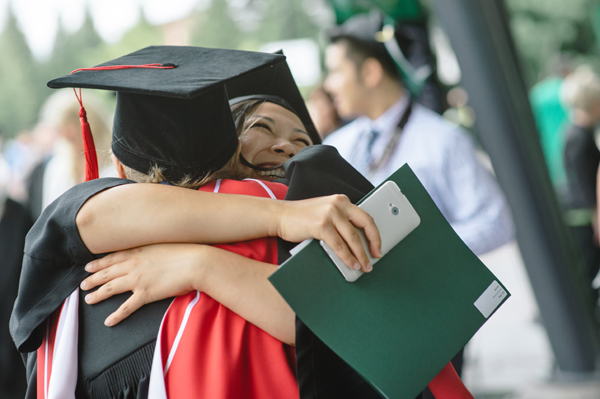 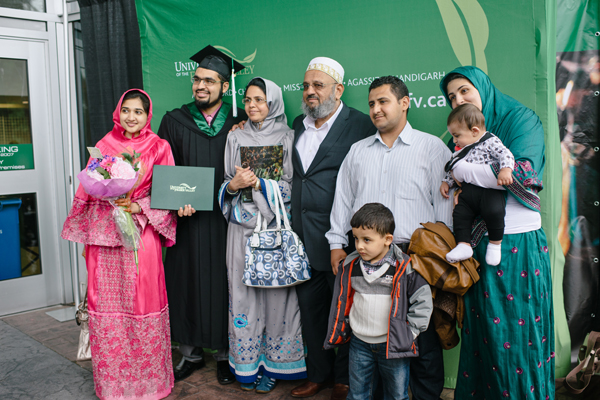 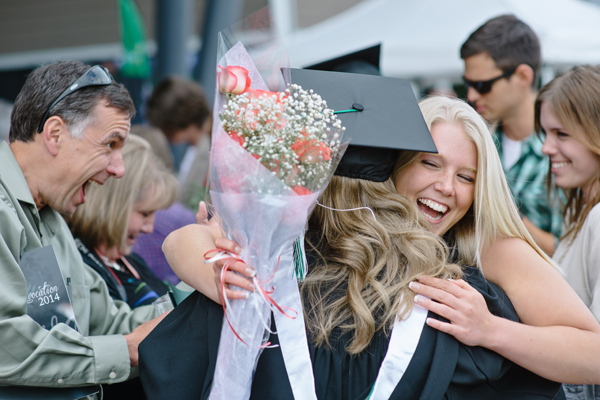 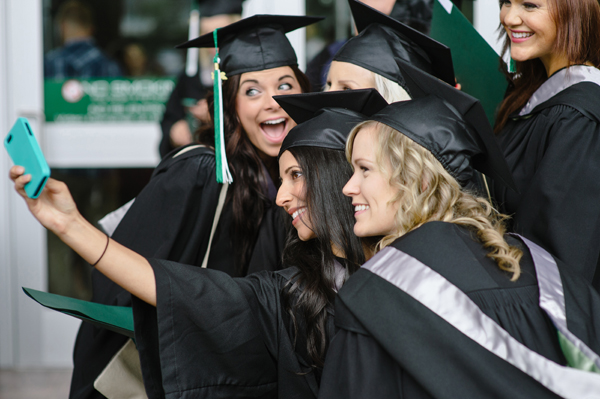 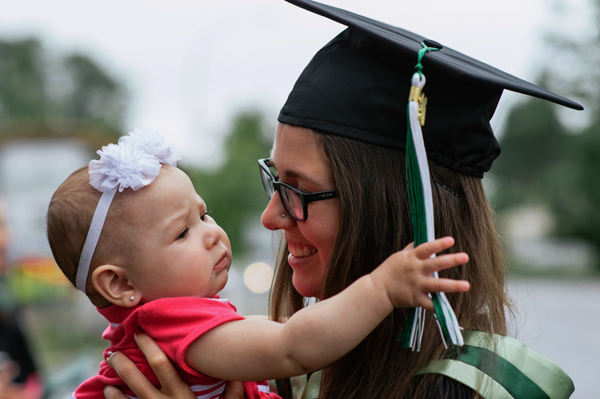 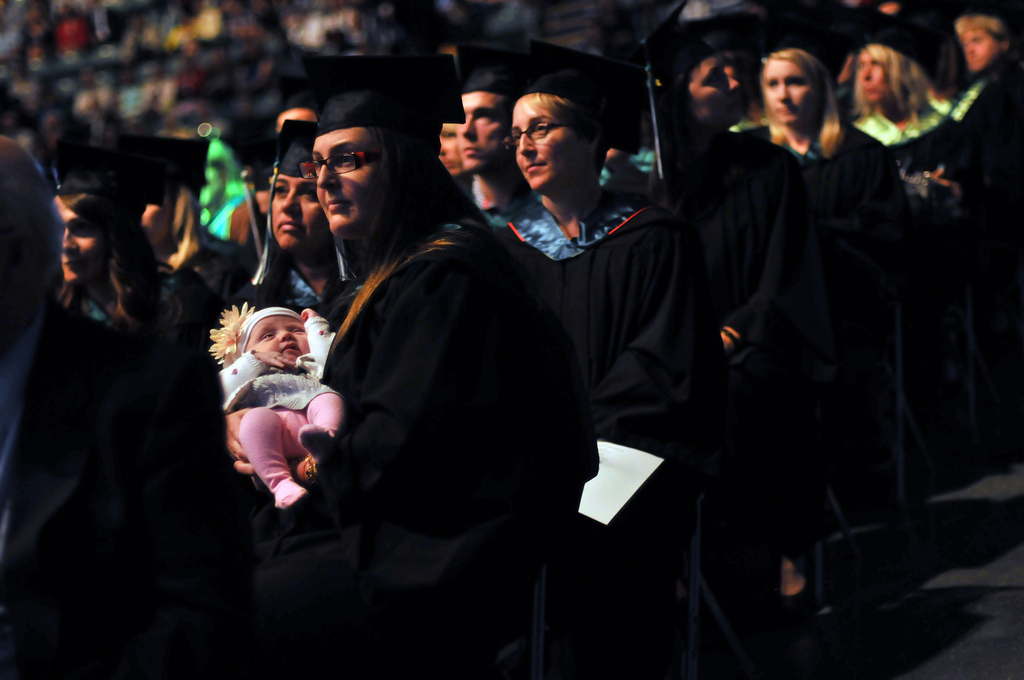 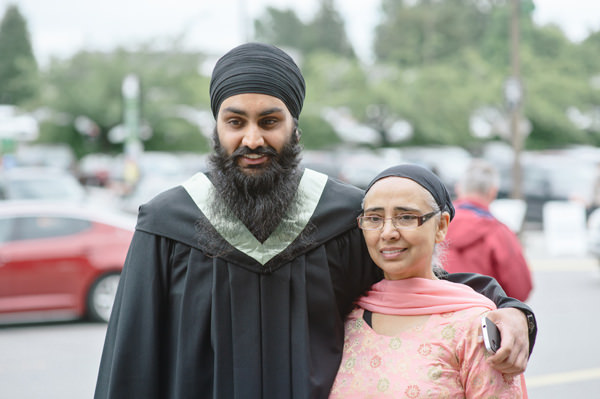 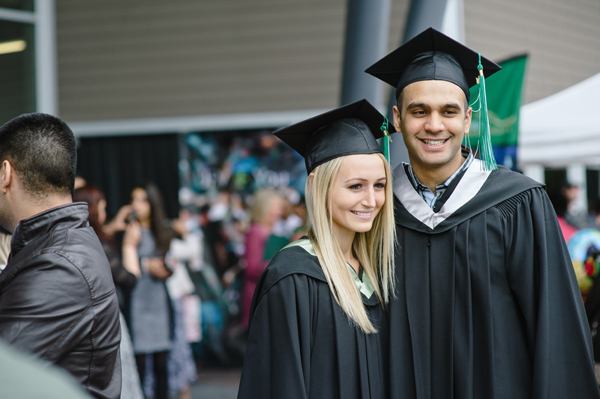 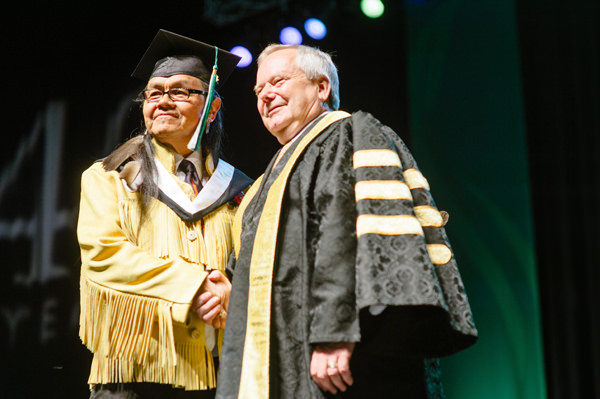 Evered greeted the crowds with salutations in several languages, reflecting the many nations represented by UFV grads.

He noted that UFV awarded nearly double the credentials conferred just six years ago, and alluded to the university’s 40th anniversary, noting that UFV has come a long way since starting out in church basements and storefronts in 1974.

“Education is a great personal investment, bringing lifelong returns to graduates, not only financially but in better career options, job satisfaction, health, and enriched lives,” he noted. “But… we all benefit from the knowledge, skills, critical thinking and creative problem-solving of these graduates. Some will serve us right here in the Valley, and some, as we know from the successes of our previous graduates, will play leading roles tackling national and world problems. They are the people who will make our communities healthier, safer, stronger, and wealthier, not just in an economic sense but also in the richness of the social and cultural progress they will lead and inspire.”

Matthew Dirks, one of the first graduates from the new Bachelor of Arts in Global Development Studies, related how his international experience gave him new perspective and an appreciation of the opportunities offered to UFV students, both on campus and abroad.

“During my time at UFV I had the opportunity to study abroad in England, do an internship in Tanzania, study under brilliant professors, and laugh and learn along with some of you. University is a unique place. A congregation of diverse but like-minded individuals dedicated to challenging themselves and those around them. Through my journey, I came to realize that my degree was not about knowledge accumulation but about capacity building. We have been taught how to teach ourselves and how to think critically. In this way, our journey doesn’t end when we leave this place. The memories we made and the skills we learned will stick with us far beyond the theories and equations we tried to so vigorously memorize. It is this enrichment of our current capabilities and creation of new capabilities that is at the heart of education,” he said.

Val Waughtal is a graduate of the Bachelor of Adult Education degree who lives in Prince George and took most of her UFV courses online.

She is also a mature student who remembers when “new technology” meant electric typewriters.

“Even though I did not attend our bricks and mortar university my experiences and challenges have been similar to yours. We have all experienced the stress of sleepless nights, getting our assignments in on time and finding time to study. Most of us have experienced the push to try something new — something that took us out of our comfort zones — at the same time as trying to a meal on the table or find the couch under a pile of books. My experience has taught me that there are many paths in our journey to education,” she said.

Megan Froese, an Agriculture Technology diploma grad, reminded her fellow grads that they could make a difference in the world.

“As you step forward from today, you have an uncompleted story ahead of you. Whether you are choosing to continue your post-secondary education, enter the work force, travel the world, or volunteer, you might not have the opportunity to change the entire world, but each and every one of us has the opportunity to make a difference in someone else’s personal world every day.”

UFV awarded three honorary degrees at Convocation, to Charllotte Kwon, the founding director of the Maiwa Foundation; George Siemens, who is a leading researcher on learning technology and co-developer of the first MOOC (Massive Online Open Course); and Doug Hamilton, who was the founding chair of the Fraser Valley College board in 1974. Current UFV Board Chair Barry Delaney introduced each of the honorary doctorate recipients.

UFV also confers the Betty Urquhart community service award, in memory of one of UFV’s founding employees. This year’s recipient was Kusum Soni, a community volunteer in Mission and Abbotsford.

At the end of the final Convocation ceremony, President Mark Evered thanked Chancellor Brian Minter for his many years of service to the university, first as chair of the board of governors and then as chancellor.