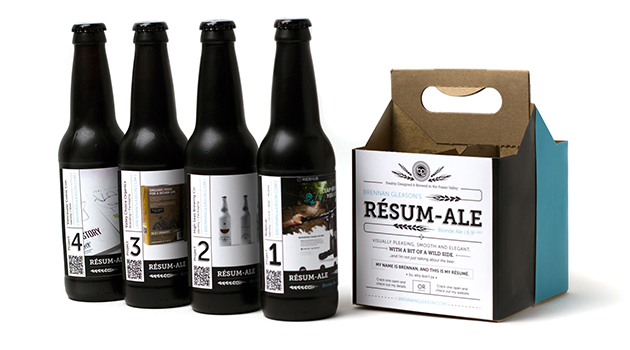 Well ahead of graduating with UFV’s first Graphic and Digital Design class earlier this month, Gleason sent out a very unique résumé: his own home-brewed beer beautifully packaged as Résum-Ale.

Holding four handsome bottles of 6.9-percent-alcohol beer, the packaging reads: “Visually pleasing, smooth and elegant with a bit of a wild side … and I’m not just talking about the beer.”

Though the clever application was sent out in February, it recently went viral, drawing attention from Yahoo, ABC News, The Huffington Post, Design Taxi, Laughing Squid and others.

“I honestly have no idea how this took off and went viral,” Brennan says.

“It has been an insane last few days with tons of media interviews.” 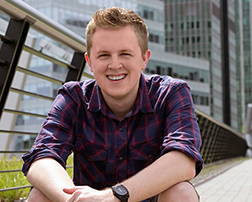 Suffice to say, it’s been a bit of a heady year for Gleason, who led UFV’s first Graphic and Digital Design graduating class in style by receiving UFV’s 2014 Governor General’s bronze medal as the diploma-level student graduating with the highest grade point average over the last 15 credits.

During a self-directed student project in his final semester of GDD, Gleason created a unique, eye-catching identity and bottle for High Seas Brewing Co. — a homebrewed brand he and his roommate Steve created so their small batch beer would have a style all its own.

It also bumped the GPA on his last 15 credits up to a very impressive 4.19 (midway between an A and an A+ average).