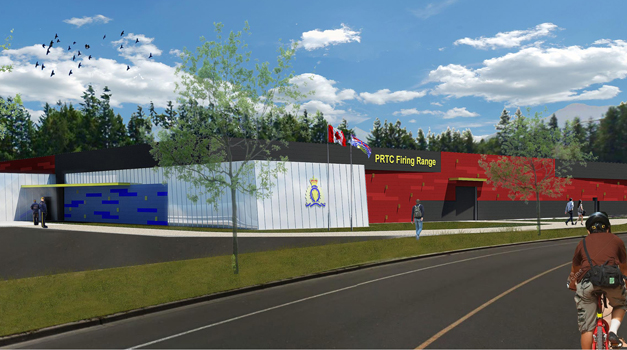 Students and employees at the University of the Fraser Valley’s Chilliwack campus at Canada Education Park (CEP) can look forward to more peace and quiet in the future.

Ever since the Trades and Technology Centre (TTC) opened in 2007, followed by Building A in 2012, people working and studying at the campus have been able to hear intermittent gunfire from the RCMP firing range located south of UFV buildings, and adjacent to the brand new UFV Agriculture Centre of Excellence.

But that is about to change. The RCMP has obtained approximately $18 million in federal funding to build a new indoor firing range. The new soundproof facility will be built across the road from the TTC at Tyson and Caen roads. Tilt-up concrete walls will keep the noise inside the building. Substantial completion is expected by October 2015.

The current firing range is on UFV property. The RCMP has been leasing it from the university since UFV bought the land in 2006. As part of programming at its Pacific Regional Training Centre (PRTC), all RCMP members in E Division (BC and Yukon) come for a week of professional development each year. Part of this programming includes firearms practice sessions.

Craig Toews, UFV executive director of campus planning, has been working closely with the RCMP and Chilliwack Economic Partners Corporation (CEPCO) on this issue. He sits in on master planning sessions for the PRTC.

Toews notes that UFV enjoys a good relationship with its neighbour on the Canada Education Park. Many RCMP members drop over to Building A for coffee and lunch, and kinesiology students use gym facilities at PRTC.

“All parties were aware that the gunfire noise was a concern, and we all affirmed that an indoor range was needed,” he said. “UFV was able to help by documenting concerns from students, employees, and community members and presenting them to the RCMP.” 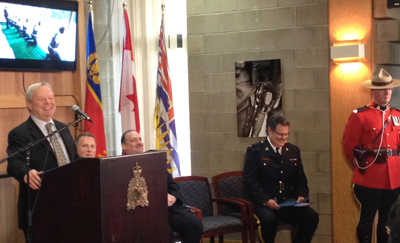 President Mark Evered is very pleased with the results.

“The noise from the firing range has been a concern for many on our Chilliwack CEP campus,” said Evered, “and I appreciate their patience as a number of our colleagues worked behind the scenes to speed up its relocation. Craig Toews was instrumental in compiling the evidence to support our case, former CEPCO president John Jansen was relentless in his efforts to get the funding needed, and MP Mark Strahl helped move things along in Ottawa. I want to also thank the RCMP for their cooperation and support, especially for the many times they suspended the use of the range to accommodate events on campus.”