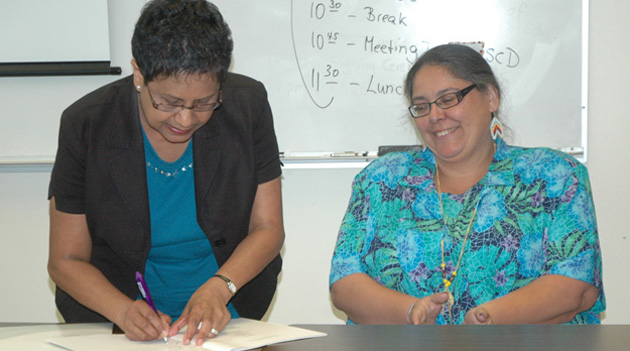 Shirley Hardman, UFV senior advisor on indigenous affairs, looks on as Dean of Professional Studies Rosetta Khalideen signs the accord on indigenous education.

UFV recently joined more than 50 faculties of education across Canada in signing an Accord on Indigenous Education.

The accord was signed to acknowledge the institutional awareness of aboriginal education issues and highlight a commitment to promoting integration of indigenous knowledge within teacher education programs.

“This won’t be an on-the-shelf document, but a living document that will guide how our Teacher Education program interacts with local aboriginal communities,” said UFV Dean of Professional Studies Rosetta Khalideen, who signed the document on behalf of the university. The accord was developed by a national association of deans of education.

Two of the guest speakers at the ceremony underlined the importance of sensitivity in the relationships between the educational and aboriginal communities, citing a troubled history during the residential school era and the following decades.

UFV’s official Elder, Terry Prest, participated in the ceremony as a witness, in keeping with aboriginal custom.

Prest spoke about his history of attending local schools as a boy, where he felt neglected by the system.

“I was treated as a half-breed,” said Prest. “Some of my people were pushed way down over the generations until they felt like nothing. I’m happy to see this document being signed.”

“My grandparents were stripped of their culture and language, which led to my mother refusing to let her own children go,” said Point. “Many aboriginal families are still afraid of and intimidated by the system.”

She highlighted the fact that her daughter earned her Bachelor of Science degree and could have gone on to become a doctor, but instead chose to teach because it’s “important to share the language and culture with our people before it’s too late.”

She spoke of how everyone asks why many aboriginals don’t succeed and said there’s not one answer for that question, but that the legacy of residential schools played a big role.

Point also noted that there were only three aboriginal support workers in the local school district when she was in school. Now there are 27. She credited a 1994 agreement gave aboriginal communities much more say in how federal transfer payments for aboriginal education were spent and allocated, for driving much of the improvements in aboriginal education.

“I’m happy to be working at the university level now, sharing the culture and history of aboriginal people with the students of today and future leaders,” concluded Point.

The audience for the ceremony was comprised mostly of students in UFV’s Teacher Education program, who will be teaching locally but may not have much awareness of the troubled history of the interaction between aboriginal people and the education system.  Shirley Hardman, UFV’s senior advisor on indigenous affairs, acted as emcee for the ceremony, which was also attended by Teacher Education faculty members and program head Awneet Sivia. A guest from Germany, Bianca Kierstein, who was in British Columbia studying the history of aboriginal education for her master’s degree, also attended and spoke about her changing perceptions of aboriginal communities.