The Centre for Indo-Canadian Studies was pleased to host a full room of avid readers and fans of Shauna Singh Baldwin on September 29th to celebrate the official launch of Reluctant Rebellions: New and Selected Non-fiction, a collection of speeches and essays by Shauna Singh Baldwin.

Published by the CICS, Reluctant Rebellions has been described by one critic as “139 pages of magic” because of Shauna Singh Baldwin’s ability to “explore labels, identity, and how identity shifts to accommodate life’s randomness.”

In 15 speeches and essays written between 2001 and 2015, Shauna brings a new perspective and voice to Canadian public discourse. Offering examples from her personal journey as a writer and a South Asian woman born in Canada, married to an American, living in the United States, and with strong ties to India, Shauna transcends homogenized national identities and is an example of a truly global citizen.

Dr. Jacqueline Nolte, Dean of the College of Arts at the University of the Fraser Valley introduced Shauna to the audience. Shauna’s engaging talk was then followed by book signing and one-on-one interactions. It was an evening full of inspiring words and engaging discussions. Shauna said that she looks forward to sharing the stories with readers everywhere.

The book is now available in paperback and ebook via Amazon. Copies of the book may also be purchased at the UFV Bookstore and other fine booksellers.

Shauna also had book reading events in British Columbia at City Centre Library in Surrey and the Department of Asian Studies at UBC as well as a reading at Mount Royal University in Calgary, Alberta. Following her tour of Western Canada, Shauna’s next set of Reluctant Rebellions readings took place in India at: Jawaharlal Nehru University in Delhi, Guru Nanak Dev University in Amritsar, the DSC Prize for South Asian Literature in Delhi, the Chandigarh Literature Festival as its keynote speaker and at the Canadian High Commission in Delhi.

The Indian Express featured a beautiful story of Shauna’s keynote address at the Chandigarh Literature Festival and can be viewed here.

Shauna will next be launching Reluctant Rebellions in the US in her hometown of Milwaukee. For more details on Shauna’s book reading tour, please visit her webpage at ShaunaSinghBaldwin.com. 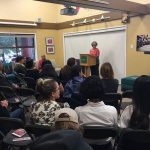 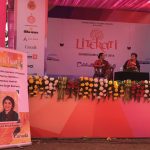 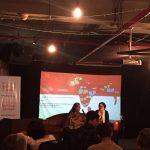 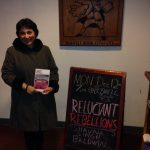