The Centre for Indo-Canadian Studies was pleased to host Dr. Virinder Kalra, for a scholarly presentation on “Punjabi Spiritual Music and the Sacred/Secular Divide” on Friday, November 21st.

Dr. Kalra’s lecture took the attendees on a virtual pilgrimage to India and Pakistan through his visual and musical audio clips which were incorporated into his presentation. Dr. Kalra touched on the historical aspects of spiritual music in a pre-partition Punjab, India, including the musical forms of kirtan and qawwali, which were the original characteristic compositions of Sikhs and Muslims. Dr. Kalra summarized in his talk that in pre-partition India, these musical forms were not so distinct, neither musicologically or crucially in terms of musicians. According to Kalra,“in contemporary East Punjab, the music played at popular shrines was performed by artists who were able to play with boundary markers and engage in what was being described as Punjabi spiritual music.”

Dr. Kalra, who is currently teaching at the Department of Sociology at the University of Manchester, has research interests in Punjabi popular culture and religion across the borders of India, Pakistan and the diaspora. He is a co-author of the book Hybridity and Diaspora and an editor of the collection: A Postcolonial people: South Asians in Britain.

Many community members who attended the lecture found it a unique and divine experience in terms of learning the history of the various forms of music and origin of various ragas in Sikh Spiritual music. Dr. Kalra’s lecture also brought some insight on the political and geographic divides which can tragically do irreversible damage to spiritual and cultural traits such as music and art. 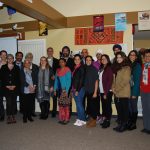