“The Spirit of Hola Mohallah” features the photographs of Maninder Singh Sodhi of Ambala, Punjab. Maninder Singh Sodhi is a Mechanical Engineer graduate from REC Kurukshetra. He has inherited the fine art of photography from his father, Mr. B.C Sodhi, a President of India awardee in Photography. Maninder, a keen photographer, has been visiting the festival of Hola Mohallah for the last 13 years. This photo exhibition is the result of his passion to capture the Spirit of Hola Mohallah at its best. The second part of the exhibition features the pioneering family of Dalip Singh Gill, a pioneer who arrived in BC in the early 20th century.

UFV President and Vice-Chancellor, Dr. Mark Evered attended the opening and presented the Khalsa Diwan Society Committee members with a plaque of appreciation for their continued partnership in community building with the CICS.

MP Ed Fast, MLA Mike De Jong and Abbotsford Mayor Bruce Banman also spoke on the significance of the Sikh Heritage Museum and the contributions that Sikhs have made to the Canadian mosaic. 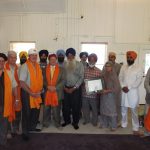 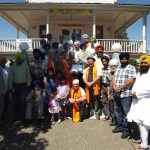