The University of the Fraser Valley strengthened its ties to India recently through an 11-day visit by UFV president Mark Evered and colleagues.

Evered was joined on his trip, which ran from Nov 4 to 15, by UFV chief financial officer Jackie Hogan and Satwinder Bains, the University Advisor on Canada–India relations and Director of the Centre for Indo Canadian Studies.

With a significant amount of the population of the Fraser Valley region having ties to India, UFV’s administration recognizes the importance of building ties to the Indian community, both within Canada and in India.

Since 2005, UFV has been offering its Bachelor of Business Administration degree to a cohort of students in Chandigarh, in India’s Punjab state, in partnership with Sanatan Dharma College Chandigarh (SDCC), an affiliate of Panjab University. UFV also has partnerships with several other Indian post-secondary institutions. These partnerships facilitate student and faculty exchanges, student internships, and visiting scholar initiatives.

Upon their arrivial to the UFV Chandigarh Campus, Mark, Jackie and Satwinder were given a very warm welcome by UFV Chandigarh students who waited eagerly to greet their guests. 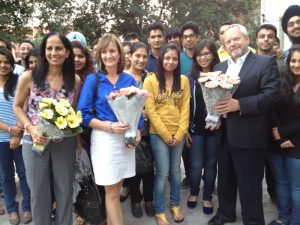