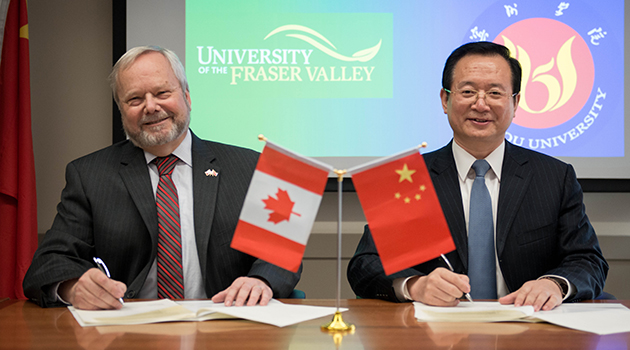 New international travel and educational opportunities are just over the horizon for Canadian students thanks to an agreement between China’s Binzhou University and the University of the Fraser Valley (see photos).

Initial areas of collaboration include a visiting student agreement, and a letter of agreement enabling Binzhou’s students to enter UFV’s post-degree certificate programs during their final year of studies. Specific programs include UFV’s Hospitality and Event Planning, Data Analysis, and Management Post-Degree certificate.

“Students with international training and experience will have a great advantage in our increasingly interconnected world. Students of both partners, and our faculty and staff, will benefit from this partnership,” says Evered.

“This kind of collaboration also strengthens the international connections between our communities.”

Executive Director of UFV International David McGuire says the quality of Chinese universities can exceed that of many North American institutions – something which could greatly benefit Canadian students.

“One of the things we hope to establish down the road is two-way traffic – we think it’s incredibly important for UFV students to study abroad as well,” McGuire says.

“China’s size and massive economic impact certainly create a beneficial learning environment for students. The universities are extremely advanced in China, and there are significant financial incentives available for students looking for that kind of opportunity.”

UFV International’s Yajing (Betty) Wang says details of arrangements with Binzhou University will continue to evolve based on framework established in the initial agreement.

Binzhou University is one of only nine approved universities in China with an emphasis on aviation.

“We see this as an opportunity to partner with one of the leaders in that industry,” Wang stated. With representatives from both Coastal Pacific Aviation and Cascade Aerospace also in attendance, the agreement has the potential to involve several key industry players in future collaboration, strengthening the Fraser Valley as a hub for aviation training.

In the interim, the MOU creates a new channel to bring international students to UFV, instead of recruiting on a much smaller basis. Arrivals will be experienced university students from Binzhou, which is an advanced city with deep historical ties sitting near the Yellow River in China’s northern Shandong province.

The new MOU also focuses on the exploration of academic and educational activities of mutual interest including common research areas and other forms of academic collaboration. This month’s signing was also attended by Educational Consul Yu from China General Consulate Vancouver.