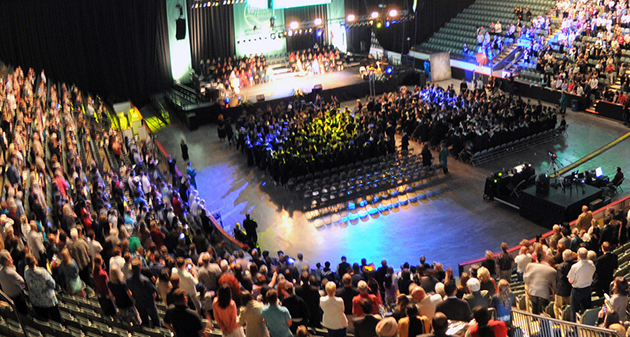 The University of the Fraser Valley will confer four honorary doctorates this year, recognizing Canadians who have made outstanding contributions to their field.

Shirzad Ahmed, Ginny Dennehy, Dr. Catherine Hickson, and Margo Kane will each attend one of UFV’s four Convocation ceremonies to receive an honorary degree. The ceremonies will be held June 11 and 12 at the Abbotsford Centre.

Shirzad Ahmed is a Calgary-based human rights lawyer who started his post-secondary education at UFV more than 20 years ago. He went on to earn a bachelor’s degree from Simon Fraser University and a law degree from the University of Calgary. A winner of UFV’s Distinguished Alumni award in 2011, his tireless fight on behalf of oppressed and vulnerable people is partially inspired by his own trials and tribulations. At the age of 18 he was a political exile from Kurdistan. He knocked on the doors of 13 countries before gaining temporary refuge in Italy and a permanent home in Canada. Ahmed received the Order of Alberta in 2009 and was named one of UFV’s Top 40 Alumni in 2014.

Ginny Dennehy is an advocate for mental health who started the Kelty Patrick Dennehy Foundation with her husband Kerry after their 17-year-old son Kelty took his own life in 2001. They then suffered the unfathomable tragedy of losing their only other child, daughter Riley, in 2009. The Kelty Foundation has raised over $7 million and funded many initiatives in the area of treatment, advocacy, and education about youth mental health issues. Initiatives the foundation has supported include the Kelty Mental Health Resource Centre at B.C. Children’s Hospital, a research chair focused on depression at UBC, the B.C. Crisis Line for youth suicide prevention, and mental health services at Lions Gate Hospital. The Kelty Foundation is also funding online services for young people suffering from depression. This initiative will combine online learning modules with therapist-assisted cognitive behavioural therapy.

Dr. Catherine Hickson is a Canadian volcanologist and former member of the Geological Survey of Canada who has mapped and studied volcanoes in Canada, assessing their past and the potential for future eruptions. She has mapped the Canadian Cordillera as well as the Cordillera of South America, and has considerable experience in other volcanic regions. One of the few female leaders in the earth science field, Hickson is active in mentoring women and young managers and was one of the founding members of the Scientists and Innovators in the Schools program. After nearly two decades in the public sector, Hickson moved into the corporate world, most recently serving as president of the exploration service company Tuya Terra Geo Corp. She has also been VP Exploration and Chief Geologist for Alterra Power Corp, and is also an adjunct professor at the University of British Columbia.

Margo Kane is an aboriginal storyteller, dancer, singer, animator, video and installation artist, producer, director, writer, and teacher. She is the founder and artistic director of Full Circle: First Nations Performance. Her one-woman show, Moonlodge, is considered a classic in the aboriginal theatre genre. Kane runs the annual Talking Stick Festival in Vancouver. As artistic director of Spirit Song Native Theatre School in Vancouver, she has developed curricula based on stories and legends of Aboriginal communities in the region. She has also used theatre as a community development tool in her role as a facilitator with the National Native Role Model program. Kane has been active on the Canadian cultural scene for more than 40 years.

“These distinguished and visionary leaders are being honoured for exemplary contributions that align well with our University’s vision and values,” said UFV President Mark Evered. “Each has drawn deeply on their own personal experiences, some very tragic, and a sense of responsibility and passion for bettering the lives of others.”

All UFV Convocation ceremonies are held at the Abbotsford Centre adjacent to the UFV Abbotsford campus on King Road. Admission is free and everyone is welcome to attend the ceremonies as UFV convocation guests.

UFV School of Business signs on to Principles for Responsible Management Education
UFV Top 40: Jason Lum — Student of everything finds success in business and politics