Kaltura will be Offline for a 10 hour period on Saturday, July 27th starting at noon to 10 pm. 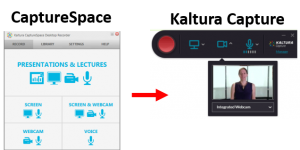 CaptureSpace was a white labelled product provided by Kaltura to its customers. Kaltura have decided to build their own desktop recorder instead so they have more control over the functionality available.

Support for CaptureSpace will end after the Kaltura upgrade, scheduled for July 27 2019.

Will it be replaced with another recording tool?

Yes, CaptureSpace will be replaced by the Kaltura Capture Desktop Recorder when Kaltura is upgraded on July 27 2019.

Can I still record using CaptureSpace after the July 27 2019 upgrade?

Does the new Kaltura Capture Desktop Recorder provide the same functionality as CaptureSpace?

Yes, and has some additional functionality such as the Whiteboard tool which can be downloaded as a separate file.

Can I still record PowerPoint presentations and have the slide content searchable?

Yes, except the process is even easier. You just need to hit record and start your slide deck.

Will I still be able to access my CaptureSpace recordings?

How can I upload videos recorded using CaptureSpace after it retires on July 27 2019?

All videos recorded using CaptureSpace are stored on your local machine. These can be uploaded directly to Kaltura from within my Media in my Class or the UFV Mediaspace by using ‘Upload Media’ option in the ‘Add New’ menu.
However, it will not be possible to upload media with multiple inputs recorded using CaptureSpace e.g. screen and webcam as one file with picture in picture after it retires.

We recommend that you upload all media to Kaltura (prior to June 30). Once the Kaltura Capture Desktop recorder is available you can uninstall CaptureSpace.

Where can I learn more?