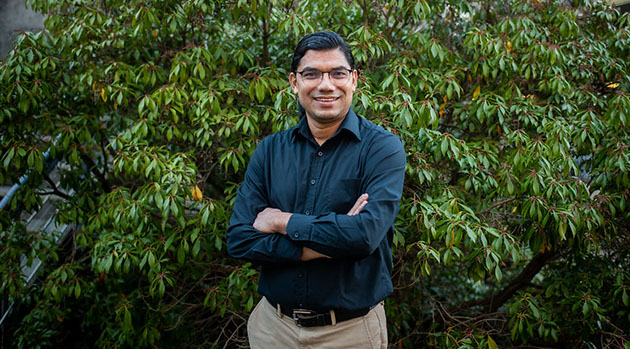 Could viewing immigrants as one homogenous group be a costly mistake for Canada?

That’s a question that Dr. Karun Karki, a UFV social work professor, will be investigating as part of a two-year research project funded by the Social Sciences and Humanities Research Council of Canada (SHRCC).

The $72,000 SHRCC insight development grant will be used to explore the employment experiences of skilled, racialized immigrants in the Canadian labour market.

More specifically, this project focuses on the gender dynamic and the intersectional differences in the experiences of systemic racism, sexism, and classism among skilled, racialized immigrant women and men in the labour market in the Lower Mainland.

Karki stresses that it is important to look specifically at immigrants who entered Canada under the Federal Skilled Worker program, because those types of immigrants have a competitive edge that gives them options to choose from among competing nations.

“Most previous studies have aggregated skilled, semi-skilled, and refugee workers as a seemingly homogenous group,” Karki says. “I argue that skilled immigrants are a distinct group of immigrants who possess a ‘global driver’s licence’ that makes it possible to sell themselves in any suitable labour market across the globe. They are considered ‘people without borders’; they possess enormous human capital.”

Karki contends that to attract and retain this category of skilled immigrants, Canada needs to pay more attention to challenges they face, including discrimination based on race, ethnicity, immigration status, and gender identity.

“My research has found that skilled immigrants, particularly racialized immigrants, experience downward occupational mobility because the Canadian labour market is very much divided between immigrants and Canadian-born citizens. We face the challenge of ensuring that they are treated with respect.”

Karki points out that competition for the highly desirable skilled immigrant segment is growing around the world. Transnational migration, especially from the Global South to the Global North, has intensified.

“These statistics suggest that Canada has responded to the changing economic needs of the country by increasing its planned intake of skilled immigrants,” Karki notes. “The emphasis on admitting skilled immigrants is associated with the country becoming more competitive and increasing productivity in today’s knowledge-based economy through immigrants’ investments, innovations, knowledge, skills, and expertise.”

These potential immigrants have high social capital and can vote with their feet, choosing the country that offers them the best setting in terms of accommodating diverse populations and respecting the socio-economic, cultural, and political dimensions of that diversity. So, it’s important for Canada to step up its game when it comes to integrating skilled immigrants, Karki says.

And that means making changes to a system that often finds medical professionals working as custodians or taxi drivers.

“Any systemic barriers that block immigrants’ access to employment for reasons unrelated to their education, skills, and training could be referred to as discriminatory and oppressive practices,” Karki notes. ”A successful employment outcome can be achieved only when these professionals can utilize their qualifications, skills, and expertise in their related fields of training.”

When a majority of skilled, racialized immigrants are denied access to suitable jobs, some are compelled to rely on an already shrinking welfare state for their survival, he adds.

Karki believes that his study will make considerable contributions to both scholarly and public understanding of broader structural and systemic issues in the Canadian labour market that both produce and reproduce the structures of inequality and render racialized immigrants vulnerable.

“My hope is that this research will enable policy recommendations to promote employment equity, social inclusion, gender equality, and the well-being of new immigrants in the workforce,” notes Karki, who himself is an immigrant to Canada from Nepal (with a few stops along the way).