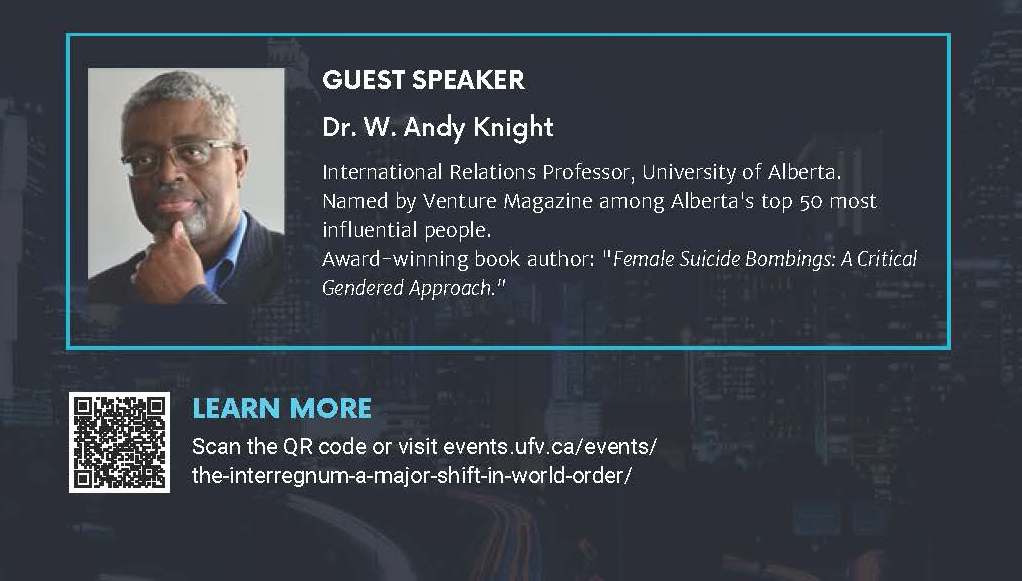 The war in Ukraine. The passing of the Queen. Evolving G7 trade policies with China. While it may seem easy to feel detached from these global issues living in North America – specifically here in the Fraser Valley – we are all intertwined when it comes to International events.

“The truth of the matter is we live on this globe together and we’re all connected,” says Dr. Edward Akuffo, Head of the UFV Political Science department. “We have to understand the relationships that our own government has established with other governments and how those relationships have an effect on our trade, immigration, environment, education, and so on.”

Akuffo and his guest speaker, Dr. W. Andy Knight, will discuss this massive issue in the upcoming UFV Politalk lecture, The Interregnum: A Major Shift in World Order. The lecture will occur on Wednesday, September 21 at 4 pm inside B101 on the Abbotsford campus.

Because of current international trends and an antiquated system for global politics, Akuffo believes that a shift in the world order is not only inevitable, but could be closer than we might think.

“This talk or this lecture is not just for academics, not just for students, it is for everybody,” says Akuffo. “It is for all of us because these days are happening, whether we are conscious of it or not, these changes are happening.”

He points to historic trends like the end of the second World War, where institutions like the United Nations, the International Monetary Fund, the World Bank and, eventually, the World Trade Organization were created to maintain global peace and structure.

With major global conflicts and tensions between countries occurring in the past 20 years, Akuffo and many political science experts question how long these antiquated institutions and strategies can weather the storm.

“These institutions that we created in 1945…are they really ready for prime time?” asks Akuffo.

The UFV Politalk series was founded by Akuffo and has been around since 2015. The roundtable talks occur a few times a year and center around current issues. Past Politalk topics have included: ​​Trump’s One Year in Office; China in Global Economy; and Canada’s Emergencies Act.

This Politalk guest, Dr. Knight, is professor of International Relations in the Political Science Department at the University of Alberta and past Chair of the department. He has written several books on the United Nations, Global Politics, Building Sustainable Peace, Remapping the Americas, and the Responsibility to Protect. Knight was named by Venture Magazine among Alberta’s top 50 most influential people by the Black Business and Professional Association of Canada. He has just completed his Fulbright at Yale.

“Andy is a man of compassion, integrity and has a wealth of knowledge when it comes to global issues and trends,” says Akuffo, who studied under Dr. Knight during his PhD studies at the University of Alberta. “He promotes diversity and inclusion in an academic environment, and has the ability to make everyone feel like they belong in the discussions.”

On Wednesday, Dr. Knight will discuss the period of interregnum – an indication of a transitional moment from one world order to the next – which is forcing society to rethink and reimagine new structures of a post-hegemonic global governance.

While this Politalk topic might provide anxiety about an uncertain future in our world, Akuffo insists this is not the case.

“This is not intended to scare people,” says Akuffo, who hopes to add politicians and leaders in the corporate world to future Politalk lectures. “Rather, this is supposed to inform people and help them become more conscious of their political, social and cultural environment.”