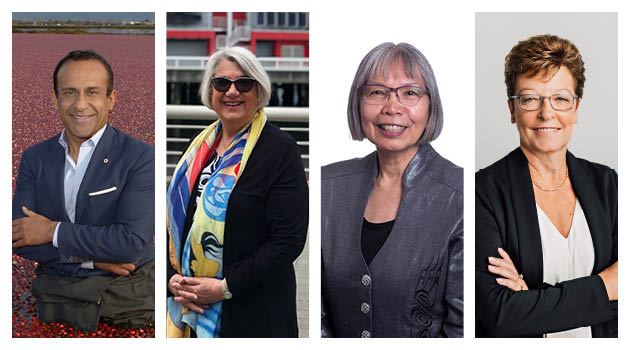 A leader in Indigenous education, an Abbotsford-based developer, an agribusiness magnate, and an innovator in Indigenous-focused counselling will receive honorary doctorates from the University of the Fraser Valley at its Convocation ceremonies on June 14 and 15.

UFV will welcome Dr. Jo-Ann Archibald, Diane Delves, Peter Dhillon, and Shirley Turcotte to campus and honour them during ceremonies at the adjacent Abbotsford Centre.

When a young Jo-ann Archibald boarded the school bus daily as an elementary school student back
in the 1950s, she stepped from one world into another.

Archibald, whose Indigenous name is Q’um Q’um Xiiem, grew up in Soowhalie near Cultus Lake,
part of the Stó:lō community, and attended the Chilliwack public school system.

Three academic degrees and a 50-year career later, Dr. Archibald is well known as an Indigenous
education scholar who has played a key role in weaving Indigenous content and ways of knowing into
the curriculum at the K-12 and post-secondary levels in British Columbia and leading other Indigenous education-related initiatives.

In recognition of her significant contribution to Indigenous education, Archibald will receive
an honorary Doctor of Letters degree from UFV at its June 14 convocation ceremony.

During her school days, she did not see herself reflected in what she was taught in the classroom.

“What little Indigenous content there was, was based on stereotypes and I did not identify with them.”

Once she became a teacher, she was determined to change that.

“I devoted my career to making systemic change at all levels of education, so that students would have the opportunity to learn relevant Indigenous perspectives, cultures, and world views, and learn about the history of our colonization.”

At the heart of her practice is Indigenous Storywork, an approach to teaching, learning, curriculum, and research that incorporates Indigenous traditional and life-experience stories as a way of understanding Indigenous culture.

She started her professional working life as an elementary school teacher and her last role was Associate Dean for Indigenous Education in the Faculty of Education at UBC.

Throughout her career she has worked collaboratively with partners to Indigenize curriculum and
encourage the recognition of Indigenous ways of knowing. She is now retired and a professor emeritus and continues her work on a volunteer basis.

Archibald will receive her honorary doctorate at the Tuesday, June 14 convocation ceremony, which starts at 2:3o pm at the Abbotsford Centre. The public is welcome to attend.

Diane Delves has always been an entrepreneur.

As a young child, Delves and her neighbour, who was her best friend, took over a small stake of her friend’s mother’s garden, harvesting their own vegetables.

“We didn’t want to eat vegetables, we actually sold them to neighbours,” says Delves. “We’d go door to door, selling potatoes, carrots, and peas. So, that was my first taste of running my own business.”

As she grew older, she shifted that entrepreneurial spirit from produce to real estate. Delves spent the first half of her career as a real estate appraiser, even starting her own appraising business.

In 2000 she co-founded Quantum Properties, becoming sole owner in 2006.

In two decades, her development group has built over 1,300 new homes, including Mahogany at Mill Lake, which is Abbotsford’s tallest building.

Quantum was recently ranked thirteenth in Business in Vancouver’s Biggest BC Businesses Owned by Women in 2021 list. She has experience serving on many boards including the Abbotsford Airport Authority, Partnerships BC, and the BC Expropriation Compensation Board. She currently serves as a Vice Chair at Large for the Urban Development Institute, Pacific Region.

Possibly more impressive than her impact on the real estate industry in British Columbia has been Delves’ generosity and commitment to bettering the lives of people in her community. She is a benefactor on behalf of Quantum to charities such as Habitat for Humanity, Canucks Place Children’s Hospice, Abbotsford Hospice, and Hawthorne Senior Care Community.

Delves has also been a long-time supporter of UFV. She has sponsored and hosted events, and since 2008, funded an annual Women in Trades scholarship at UFV. She is adding a second scholarship this fall. She will receive her honorary doctorate at the Wednesday, June 15, 9:30 am ceremony at the Abbotsford Centre. The public is welcome to attend.

A groundbreaking businessman from humble beginnings whose company now produces billions of pounds of cranberries and employs hundreds across the world, Peter Dhillon is a tireless leader,
philanthropist, and cultural advocate.

And as of June 14, he’ll also be the proud recipient of an honorary Doctor of Laws degree from the University of the Fraser Valley.

Dhillon built on values ingrained by his parents Rashpal and Surinder, who slept on a sawdust floor after immigrating from a village in the Punjab region of India, not far from Chandigarh.

He cleaned ditches on their first farm — eventually transforming the family cranberry business
into a global leader.

As the youngest, first non-American, and first visible minority to serve as chairman in the history of Ocean Spray — the world’s premier cranberry cooperative with more than $2 billion in annual sales — Dhillon often uses his platform to empower others. Appointed to the Bank of Canada’s board of directors, he’s held the governorship of such leading public entities as the BC Agricultural Land Reserve, Atomic Energy Canada, the Vancouver 2010 Olympic Games, and the Canada Customs and Revenue Agency, and served on boards for the Vancouver Airport Authority, BC Ferries, Greater Vancouver Advisory Authority, and many more.

Born in Burnaby, Dhillon holds a BA in History from UBC, a law degree from the University of Leeds, and was honoured with the Order of British Columbia in 2009, and the Queen’s Diamond Jubilee medal in 2012.

As a business leader and CEO of the Richberry Group of Companies, Dhillon’s strong sense of ethics and duty led him to donate millions to causes throughout British Columbia and across the country in the last decade alone.

Breaking the colour barrier time and time again, he counts his individual successes as the success of his community. For this reason, he cherishes such recognition as the NRI India Award, Darpan Magazine Extraordinary Achievement Award, Indo-Canada Chamber of Commerce CEO of the Year, and Canada Sikh Centennial Gala Inductee.

Dhillon will receive his honorary doctorate at the Tuesday, June 14 morning convocation ceremony, which starts at 9:3o am at the Abbotsford Centre. The public is welcome to attend.

Improving the circumstances of Indigenous people on a systematic level and developing mental
health support and tools has been Shirley Turcotte’s life’s work.

The Métis knowledge carrier and registered clinical counsellor’s work has been recognized
throughout Canada and she has been the recipient of British Columbia’s Woman of Distinction
Award in Health and Education.

Now UFV is adding to Turcotte’s long list of honours by presenting her with an honorary degree.
“The work that I do is so collective, and it involves so many peoples across the Nations, that
it would be really an insult not to accept it,” says Turcotte, a resident of Vancouver. “I can
appreciate that this award is honouring the work that we’ve done in Indigenous psychotherapy
and in attempting to change child welfare and to reshape things in Canada.”

Turcotte was born in Winnipeg to a Métis father and a mother who was raised Russian Mennonite. Her father was physically violent with her family and routinely sexually abused Turcotte and her older sister. Confronting and surviving the abuse, incest, and trauma Turcotte experienced as a child was the topic of To a Safer Place, a critically acclaimed and controversial documentary released in 1987.

In her career as a Métis knowledge carrier and registered clinical counsellor, Turcotte created new tools and forms of therapy to help survivors of childhood abuse and complex trauma.

She created a health program called Indigenous Focusing-Oriented Therapy (IFOT), which blends Indigenous traditions of healing with current needs of Indigenous individuals and communities. The program focuses on addressing trauma resulting from a range of causes, from residential schooling to the child welfare system, to the contemporary aftermath of colonization in Canada.

Turcotte will receive her honorary doctorate at the Wednesday, June 15 afternoon convocation ceremony, which starts at 2:3o pm at the Abbotsford Centre. The public is welcome to attend.