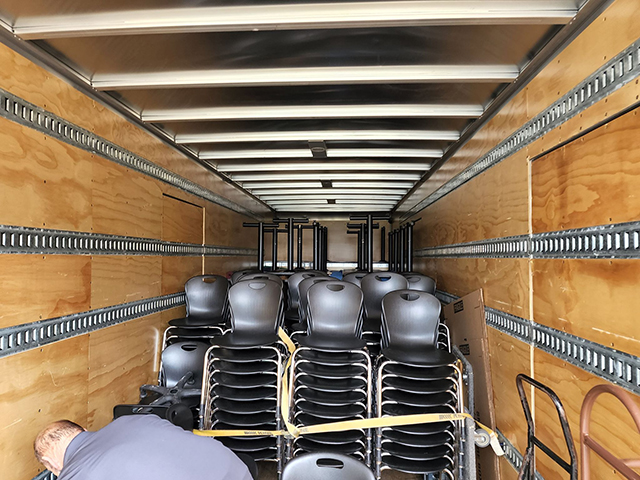 Stacks of chairs bound for a new life in local schools are secured in a moving truck.

Every renovation project at UFV is meticulously planned with hundreds of line items and considerations. Just as much as the UFV Project team has to track and budget for raw materials, labour costs, and new furniture, they also have to responsibly remove construction waste and outdated furniture. 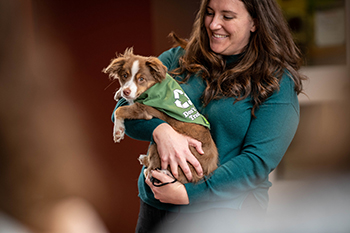 “In the past, we have tried to reuse furniture as much as possible, either in the new buildings or in other areas on our campuses,” says Shelley Young, senior campus designer at UFV Campus Planning. “Even end-of-life furniture we would break down into pieces and try to recycle.”

But repurposing old furniture has become increasingly challenging because of the way new spaces are designed and used. Offices are becoming smaller. Modern furniture, like podiums and desks, are more flexible and configured to adapt to multiple environments. Even audio-visual components are changing considerably to support an increase in hybrid learning that was adopted during the pandemic. 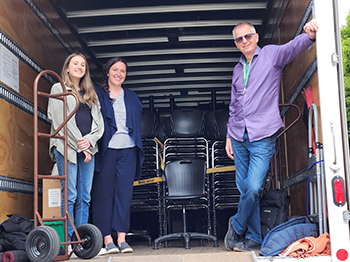 Understanding their disposal and storage options are more limited, UFV’s planners needed a more structured process of dealing with excess furniture. In early spring 2022, the Projects Team engaged the Office of Sustainability about a pilot project aimed at building out a network of schools that use leftover furniture from renovations.

“Together, we have been able to rehome nearly 200 chairs and more than 80 tables from C Building so that they don’t end up in the landfill,” says Jennifer Martel, sustainability coordinator at UFV’s Office of Sustainability. “We have connected with local elementary and secondary schools and have been able to rehome a significant amount, saving them money and helping the planet at the same time.”

With UFV constantly developing into a green and technologically advanced institution, renovations and new construction will continually be at the forefront. Although this pilot program has been successful, the execution was still very ad hoc. Currently, there is no sophisticated inventory and reporting system, and the network of recipients has not gone past personal connections.

“Specifically for this time around, because it was such a time crunch, my students and I just messaged a few teachers and principals that we knew from when we were in school in Abbotsford, having all grown up here,” says Martel. “We hope to actually be able to build up a database that we can go forward with as we have more and more projects coming up and likely more surplus.”

On top of keeping waste out of landfills (or taking up space in storage units), this allows schools to get high quality furniture like desks, tables, and podiums at zero cost (aside from the cost to transport).

“There’s a huge need for good furniture in schools, and we’re provincially funded as well as the other school systems,” Martel says. “So, it’s actually saving taxpayer dollars because now they don’t have to go out and buy all this new furniture.”

Eventually, Young and Martel say, they would like to create a streamlined process to track how much the donating, reusing, or recycling of old furniture and construction waste is reducing the school’s carbon footprint — from measuring CO2 emissions to the weight of waste saved.

“I can’t see our construction slowing down or reducing anytime soon, we are expanding and the projects are increasing in volume and size of buildings,” says Young. “I think it’s a really good time to build a solid process of reducing construction waste and old furniture.

“Working in conjunction with the sustainability team has already put us on a great path for that.”