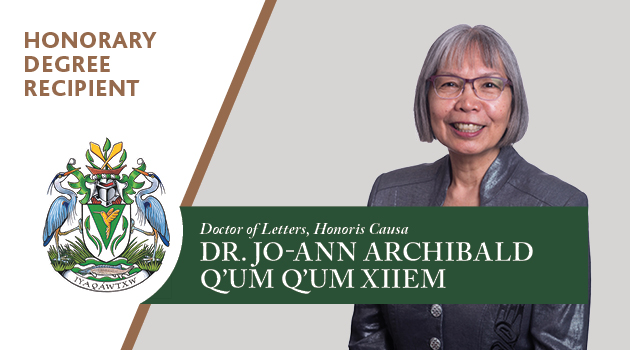 When a young Jo-ann Archibald boarded the school bus daily as an elementary school student back in the 1950s, she stepped from one world into another.

Archibald, whose Indigenous name is Q’um Q’um Xiiem, grew up in Soowhalie near Cultus Lake, part of the Indigenous Stó:lō community, and attended the Chilliwack public school system, graduating as part of the first Grade 12 class at Sardis Secondary.

Three academic degrees and a 50-year career later, Dr. Archibald is well known as an Indigenous education scholar who has played a key role in weaving Indigenous content and ways of knowing into the curriculum at the K-12 and post-secondary levels in British Columbia and leading other Indigenous education-related initiatives.

In recognition of her significant contribution to Indigenous education, Archibald will receive an honorary Doctor of Letters degree from the University of the Fraser Valley at its June ___ convocation ceremony.

“It brought me great joy to hear about this honor,” she said. “It means a lot to me because of my past and continuing connections to UFV.”

In high school, she knew she was different from the majority of students — by Grade 12 there was just one other Stó:lō person in her class — but found the general approach to education to be very focused on assimilation into the dominant white culture.

“I really value my childhood experience. I grew up in a caring community with lots of family and community nearby, and lots of freedom to wander the fields, woods, and creeks. When I would board that bus to go to school, it really was a different world. In school there was no reflection of my Indigeneity. What little Indigenous content there was, was based on stereotypes and I did not identify with them.”

She chose to become a teacher and entered UBC right after graduation. Once she became a teacher herself she was determined to change that.

“I devoted my career to making systemic change at all levels of education, so that students would have the opportunity to learn relevant Indigenous perspectives, cultures, and world views, and learn about the history of our colonization.”

Archibald has been a change agent from within the education system throughout her career, trying to make it responsive to Indigenous ways of knowing and being.

“All students, teachers, and faculty members benefit from learning about Indigenous methodology and pedagogy,” she says.

At the heart of her practice is Indigenous Storywork, an approach to teaching, learning, curriculum, and research that incorporates Indigenous traditional and life-experience stories as a way of understanding Indigenous culture.

“At the beginning of Coast Salish cultural gatherings, the spokesperson who is guiding the event will say ‘My dear ones, our work is about to begin.’ When the guests hear those words, they give their full attention to the words and actions that are subsequently shared. By implication, the term Storywork signals that Indigenous stories are to be taken seriously and that we as storytellers and story listeners/readers/learners can work together to learn from and with these stories,” she notes.

Throughout her master’s degree and PhD studies, she focused her research on Indigenous history, culture, and ways of knowing, and the damage done by colonial practices and policies.

She started her professional working life as an elementary school teacher, returning early in her career to the Chilliwack School District and teaching at Rosedale Elementary.

Although she grew up involved in her Indigenous culture at home, there were gaps in her knowledge. Decades of colonization and residential school meant that not many people were fluent in Halq’eméylem, the language of the Stó:lō. Ceremonies, dances, and other ways of preserving the culture were also banned for decades.

But the 1970s and ’80s were a time of reawakening for Indigenous traditional ways, and Archibald helped to lead that process in B.C.

She became the Indian Education Coordinator for elementary grades for the Chilliwack School District and worked with the Coqualeetza Cultural Centre on curriculum development and with associated Stó:lō Elders who were trying to preserve and revive the Halq’eméylem language.

Archibald notes that the Elders were a bit ahead of their time.

“The Truth and Reconciliation Commission states that all students should have the opportunity to learn about Indigenous events and history. Our Elders were enacting that in the 1980s.”

In 1983 Archibald became the coordinator for the Chilliwack cohort of UBC’s Native Indian Teacher Education Program (NITEP), which was based at Fraser Valley College (now UFV). This program allowed Indigenous students to learn in a cohort and stay near their home communities for the first two years before moving to UBC.

“I really valued Fraser Valley College for the very collegial and welcoming setting provided for our students, who also took some of their academic classes from FVC instructors.”

After a stint working for NITEP on the UBC Vancouver campus, she became head of UBC’s First Nations House of Learning, broadening her work to encourage more Indigenous student participation in all faculties and programs.

Throughout her career, she worked collaboratively with many partners to Indigenize curriculum and encourage the recognition of Indigenous ways of knowing.

Archibald received the Justice Achievement Award in 1995 from the National Association for Court Management for her development of First Nations justice curriculum. In 2000 she won the National Aboriginal Achievement Award for Education. The American Educational Research Association awarded her the Scholars of Color Distinguished Career Contribution Award in 2013. In 2021, she was named YMCA Women of Distinction nominee in the Education, Training & Development category.

She has frequently published academic articles work and has sat on many advisory boards for different books.

Her final title at UBC was Associate Dean for Indigenous Education. She is now retired and a professor emeritus, but continues her work through several channels on a volunteer basis, although she also enjoys having more time to spend with her grandchildren. Although now based in Vancouver, she returns to Soowhalie often to visit her mother, sisters, and extended family.