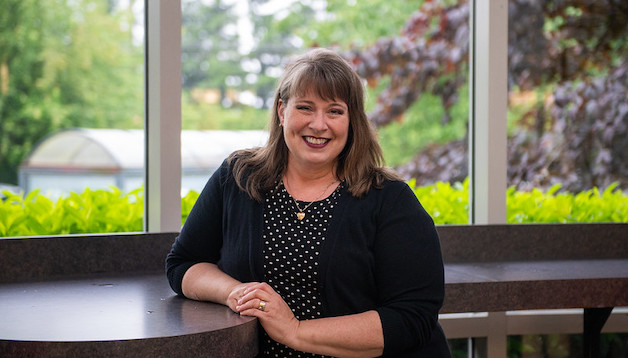 Reinventing yourself with your career is a daunting idea for anyone. But try doing it at 51-years old like Rose-Mary Siemens.

In 2019, after a decade-long career in tourism followed by a 20-year run managing wine stores, Siemens hit a crossroads professionally. Opportunities in the wine industry had dried up. She also felt unfulfilled. And, now that her kids were grown and independent, she was ready for a new challenge.

The question was, what kind of career would light up her soul and help her contribute to society?

“At first, I was thinking about choosing nursing, but I thought that would be physically difficult at my age,” says Siemens, also noting that she did not have the time or resources to do a traditional, full-time bachelor’s degree program.

“After talking to one of the advisors at UFV, I realized that the Social Service diploma program was the perfect fit because I’ve always been passionate about helping people and it was a two-year program that I could commit to.”

Siemens, now 54, started at UFV early in the pandemic in the fall of 2020. Committing full-time to school without a job in a time of uncertainty was not ideal and came with risk and hesitation.

Betting on herself paid off. Even with COVID restrictions and virtual classes, she completed two meaningful practicums and maintained a perfect 4.33 GPA, earning her the Governor General’s bronze medal recognizing the top academic student in a two-year program.

“I was at work, so the call from Dr. Mandigo at UFV went to voicemail,” says Siemens. “I listened to it later and I was completely surprised. I knew that I had done well, but I had to listen to it a few times to realize that I had won.”

Finding her true calling as a social service worker might have come later in Siemens’ life, but the seeds were planted early. Growing up in Chilliwack in the 1970s and early ‘ 80s, she was always an empathetic person. The first person to give people hugs. The first one to lend a shoulder for friends to cry on.

Entering UFV (then Fraser Valley College) in 1987, her initial instinct was to go into a career where she would provide emotional support for people. However, a family member told her that since she was so soft-hearted, it would be difficult for her emotionally to enter that kind of field. Looking back, Siemens agrees.

“I think I know my aunt was right at the time,” says Siemens, who then went on to get a Marketing and Tourism diploma from BCIT. “Everything was black and white to me and I was so idealistic. I had no idea what life was really like.”

Building strength and gaining awareness of human suffering came from life experiences as she aged. She recognized the emotional turmoil of her father, a World War II veteran, was likely undiagnosed PTSD. In her 30s, she witnessed the mental health struggles of an Indigenous romantic partner, who was a survivor of residential schools. Siemens herself was the victim of domestic abuse in a past relationship.

She started to think about transitioning into a career of supporting people when she managed wine stores and found herself connecting with customers, picking up intuitively on their struggles and making herself available if they needed to talk.

By the time Siemens returned to UFV over 30 years after her first stint here, she had clarity on her program but was still undecided on exactly who she wanted to help. Initially, she wanted to work with female victims of domestic violence, but that was a little too close to her heart. Then she explored working with people near the end of their lives in a long-term care home or hospice.

She completed two practicums as part of her program. The first was at a high school in Abbotsford, where she worked with teens to help them with gaining mental wellness. The second was at Wilma’s Transition Society in Chilliwack, where she worked with women escaping intimate partner violence and building a new life.

She credits her professors Lisa Moy, Patrick Storey and her practicum supervisor Leah Douglas as influential faculty mentors. Her greatest advice was from Storey, who reminded her when dealing with victims, to remember that “their story is their story, and it’s not about you.”

“I learned you can’t hijack someone’s story and experience and make it about yourself because that’s not helpful,” Siemens says. “Even if it’s something that’s happened in your life. They just need to talk about their life and what they’re going through and then should be supported.”

Because she had course credits from when she attended UFV the first time, Siemens finished her program early in December 2021. She recently got a job as a mental health community support worker at Stepping Stone Community Services, a non-profit in Langley that offers a range of psychosocial rehabilitation programs and services that are person-centred and recovery-focused.

“I have a group of people who I connect with every week, and we meet either in the community or at the Stepping Stone clubhouse,” she says proudly. “These are people who have been connected to us through the Langley Mental Health clinic, and are getting treatment but might need a little bit of extra support and encouragement.”

Although it has just been a month, Siemens is exactly where she wants to be and belongs. It might have taken over three decades to realize her greater purpose, but there is always time to help somebody. Even yourself.

“It is never too late to change direction and reinvent yourself,” says Siemens. “Take risks and live without regrets and missed opportunities. Life has a way of closing some doors and opening others. Choose the open doors and see where they take you.” 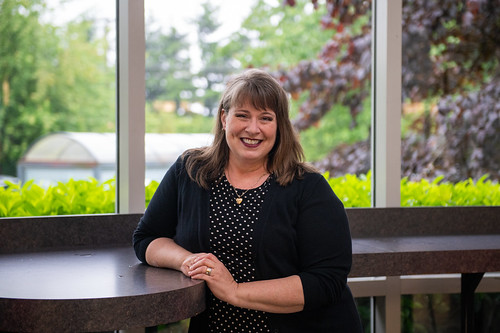