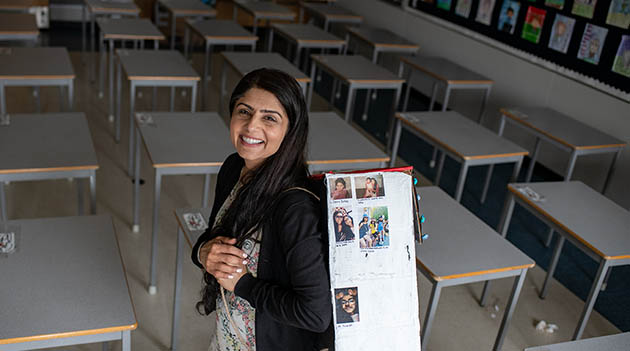 Nerlap Kaur Sidhu in her classroom.

Underneath are more than 30 colourful self-portraits neatly lined up and symmetrically organized into three rows.

More important than the art quality is the diversity, the pride, and most importantly, the stories, derived from each of the pre-teens’ faces in the portraits.

Their self-portraits reflect the ethnic diversity of Abbotsford today. Each one original and each one authentic.

“We all have a story,” says Nerlap, a teacher at Eugene Reimer Middle School in Abbotsford, and a UFV alumna who earned her BA in geography in 2004. “Our youth need to understand that their life stories matter. Most importantly, that they matter.”

Discovering self-identity and understanding your roots is a journey Nerlap is well familiar with: the complex cultural experiences she navigated locally in her own youth in the 1970s and ’80s make her both credible and relatable.

Nerlap is an Abbotsford homegirl.

Her grandparents and mother immigrated from India, but she was born in B.C. and grew up on a dairy farm on Sumas Prairie, about 20 km away from the school where she now teaches.

And the family connection to UFV runs deep. She remembers her father driving her mother to English as a Second Language classes at the Abbotsford campus.

At her own elementary school, she was one of the few children of South Asian descent. But despite the cultural and appearance differences, Nerlap was able to assimilate with her predominantly white classmates.

Hours were spent on the volleyball court and the soccer field. She felt at home there, and  learned leadership skills, discipline, a work ethic, and sportsmanship.

“I found sports was a really neat space where you didn’t really have to worry about the colour of your skin,” she recalls.

“So, I found that a real kind of safe space for myself personally.”

In those days, Nerlap was known as Anita at school. A teacher anglicized her name, as was common practice in those days. Decades later, at age 38, she reclaimed the Punjabi name her mother gave her, Nerlap, for use in all aspects of her life.

But athletic talents, intelligence, or blending in cannot completely shield people of colour from ignorance, microaggressions, and occasional side comments.

Nerlap remembers being called a derogatory name by a classmate on the playground.

“You think that you fit in with everybody else to a certain degree, and then you realize, well, I’ve been called these derogatory names and I am different,” she says. “And, that kind of startles you.

“So, that part of my childhood definitely brings me to the social justice work I am so passionate about.”

For the past 17 years, Nerlap has been teaching in public school in Abbotsford. Not just teaching the curriculum, but instilling confidence into her students by encouraging them to embrace their heritage and who they are.

“No child should have to feel uncomfortable in their skin,” she says. 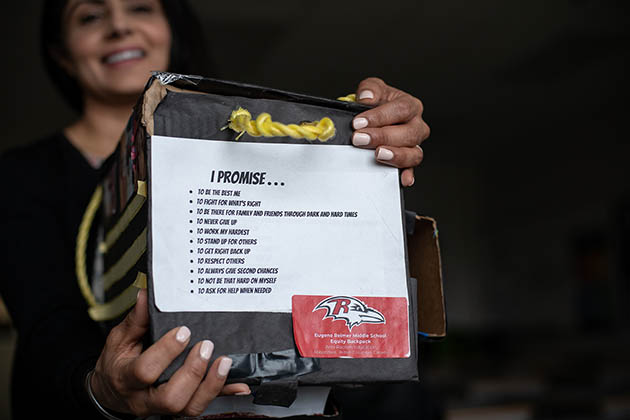 It starts with a pledge printed on a horizontal 8-by-11 sheet of paper stapled to the side of a cardboard handcrafted backpack.

If you turned on CBC News or checked the local papers around the Fraser Valley last fall, chances are you noticed that students at Eugene Reimer were at the forefront of a local social justice movement.

Children from multiple ethnicities donned artistic cardboard backpacks with anti-racism, inclusion, and equity messages. Dubbed Equity Backpacks, each displayed messages that were both authentic to their own back stories and signaled empathy to marginalized people.

The year 2020 was historic on many levels. On top of the coronavirus global pandemic, the Black Lives Matter movement and social justice reform in the United States hit a breaking point, intensified by the racially charged killings of Breonna Taylor and George Floyd.

“I was very disheartened, it was like a gut-wrenching pain witnessing all of those experiences that were playing out in the world,” says Nerlap. “As an educator it broke my heart knowing  that people are treating each other like that and that it is still continuing to happen.”

Although she had spent the better part of the past decade building community and promoting equity amongst her students, Nerlap knew she would have to be a bold educator to have the students make a meaningful contribution to the conversation sparked by the events of 2020.

The backpacks not only focused on race, but also addressed inequities in gender, age, ability, and class. The goal was not just to make a stand against biases, but also have students highlight aspects of their present identity, while showing understanding for people’s differences.

“For me, the most critical piece is that the students were empowered,” says Nerlap, who is also the mother of two adult children. “They felt heard, they felt seen, and it’s an opportunity to actually change the world in a positive way — to bring people together.”

The equity backpacks have been well received by students, parents, and fellow teachers. Her passion for instilling inclusive values and standing up to injustices has rubbed off across her community.

“The initiatives are relevant and timely and connect with the real-time issues that are occurring in the community and the world,” says Ian Levings, the  principal at Eugene Reimer. “We value inclusion and respect for everybody in our school community and this project is an example of actually putting theory into practice.” 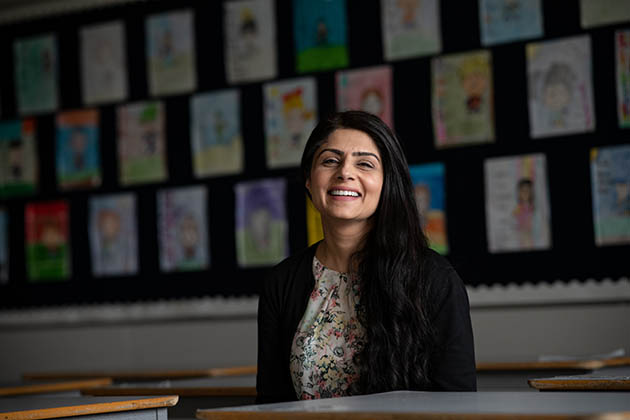 Nerlap knows that erasing inequities and putting kids in a position to succeed goes past a backpack campaign. She understands that changing the narrative means consistent and open community dialogue.

“She has impacted the students and their families by giving them learning opportunities that are exciting and relevant,” says Levings, mentioning We are Canada, a community project that Nerlap helped lead while the school was in remote learning mode in 2020 during the pandemic. “Project-based learning is a key aspect of her teaching as students have been given a voice in their learning.”

Nerlap routinely organizes community projects at Eugene Reimer, where her students get to interact with everybody from firefighters to the Mayor of Abbotsford and other community leaders.

“It’s about paying it forward and opening your hearts to others,” she says, adding that her students completed multiple random acts of kindness in the community. “And that was my goal. I wanted them to think past themselves.”

Paying it forward is a trait that Nerlap developed as a UFV undergrad in the early 2000s. She remembers a strong community feel on campus. She can recall many of her geography professors being understanding and empathetic to her as a young mother paying her way through school by working shifts at the local pharmacy.

One professor, Doug Nicol, held a bus for a field trip as she was more than half an hour late because of competing parenting duties.

“And he’s like, ‘of course I waited, I knew you wouldn’t miss class,’” Nerlap says with a laugh. “The kindness I felt at UFV, you probably don’t see often at larger or more urban institutions. It changed my identity by making me see and understand the beauty of a connected community and the different roles we can play in it.”

When it was time for Nerlap to apply to get her teaching certificate at SFU, Nicol provided recommendations that helped secure her acceptance.

“He did that on one of the last days before he passed away; he actually did that for me,” she says. “I never forgot that.”

She also remembers the late Ken Brealey, another Geography professor, who would scribble motivational notes on her papers, inspiring her to pursue and complete her master’s degree, which she eventually did.

“There are many times that I reach back into my memory and pull out the golden nuggets that UFV profs shared with me,” she says.

As a result, Nerlap is never more than a phone call away for the UFV community.

Recently, she presented to UFV’s Teacher Education students, and was also on an anti-racism panel, where she shared a story with the panel that was “incredibly powerful and resonated deeply with many of our students” according to program head Vandy Britton.

In 2020, Nerlap received the UFV Betty Urquhart award, which is given annually to a person within the area UFV serves who exemplifies their commitment to community service.

To say educating and empowering students or citizens is Nerlap’s passion and purpose would be an understatement.

“She has endless passion for learning and teaching,” Levings adds. “Many times, she is the last person out of the school in the afternoon. She has created community projects every year for the last six years with the goal of bringing the community together. She values and understands that each student comes with a story that matters.”

Welcome back! Here’s what’s new around your U…
Sustainability survey coming as part of Eco-Challenge