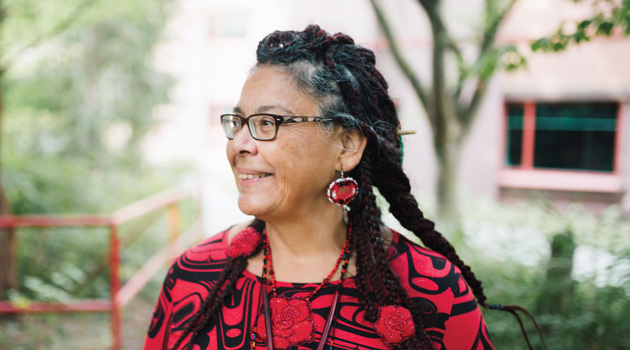 Shirley Hardman remembers the shock she felt when a government clerk asked: “And what kind of Indian are you?”

“How do you know I’m an Indian?” replied Shirley, whose Stó:lō name is Swelchalot.

“I can tell just by looking at you,” replied the clerk.

The thing is, at that point in her life, Shirley wasn’t all that sure what kind of “Indian” she was.

These days, Shirley encourages people to use terms such as Indigenous or member of a certain nation to describe the people who were the first to call B.C. home, not the outdated and inaccurate “Indian” term.

In her role as Senior Advisor on Indigenous Affairs she guides UFV’s journey of Indigenization and Reconciliation.

But back then, in the eyes of people like the government clerk, she was “just another Indian.”

Now a proud member of the Shxwha:y Village living in her home community with her grown son and among friends and relations, Shirley cannot escape the fact that she spent the first few decades of her life without a clear sense of her Indigenous identity.

Raised by a loving white couple in the Okanagan since the age of three, she remembers little of her life before her adoption.

But her birth mother did give Shirley a key to come back: she registered her baby as a member of the Shxwha:y Village (known then as the Skway Band), which allowed Shirley to eventually formally claim her Indigenous status.

Shirley has mixed feelings about her upbringing, and being separated from her birth family as part of the Sixties Scoop (the large-scale removal of Indigenous children from their families and home communities and adoption by white families in the 1960s).

“It’s a bittersweet feeling when I look back on my childhood. I did not grow up with my culture, and I knew something was missing. But I did have loving parents.

“My adoptive dad really believed in me and told me I could do whatever other girls could. I was the only brown girl in school. I experienced racism, but Dad told me I was just as good as every other girl. He instilled values in me, told me not to quit, to be responsible.” 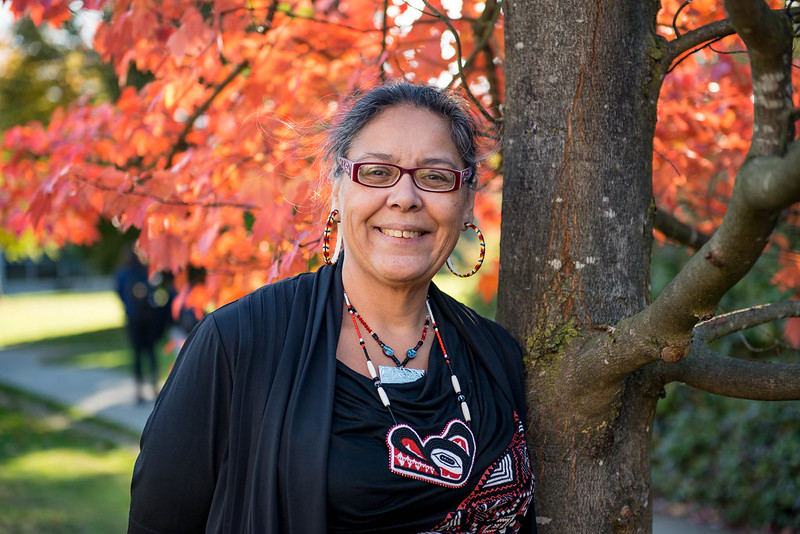 Ironically, the B.C. girl found her way back to her Stó:lō roots via Edmonton.

“The University of Alberta helped me find my way home. It’s where I got introduced to the sweat lodge and other aspects of Indigenous culture. Nobody had ever told me who I was before I got there.”

But it wasn’t easy for Shirley to take those first steps and enroll in university.

“I remember rolling into campus in my then–boyfriend’s huge truck and practically driving on the sidewalk as I went through the gates at the University of Alberta and thinking ‘I can’t possibly come to school here. I don’t belong.’”

While filling out the application for her student loan she found out exactly where she came from.

“I had to prove what band I belonged to or the Alberta government would not allow me to access a student loan. And it turns out that my band had not forgotten me. Even though I never got the chance to meet my birth mother before she passed away, her registering me did enable me to get status and find my people.” 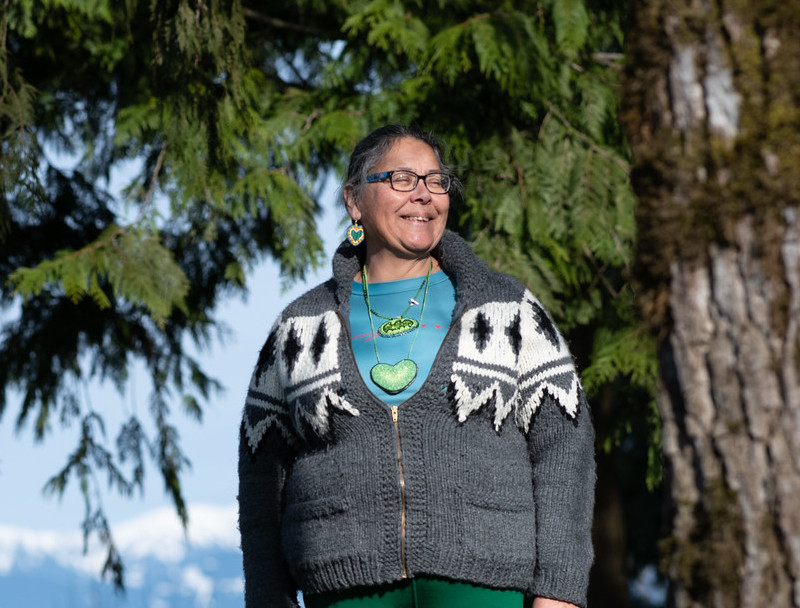 Shirley will never forget that it was her post-secondary experience that introduced her to her Indigenous culture and reconnected her to her roots.

It also provided her with the education and professional experience she needed to qualify for employment.

When she moved back to S’olh Téméxw (the Fraser Valley) one of her first jobs was as District Aboriginal Education Coordinator for the Fraser Cascade School District. This led to her serving on the Aboriginal Community Council at what was then UCFV (University College of the Fraser Valley), her first connection with her future employer.

“I was a real admirer of the work that Theresa Neel was doing as First Nations Access coordinator and founding coordinator for the Aboriginal Access Centre at UFV. As I worked helping students transition from the school district, I realized that my passion was to get more Indigenous students coming to university and feeling comfortable when they get there.”

When Theresa left for a job at another institution, Shirley came on board as First Nations Access coordinator.  While the primary focus of her job was to support Indigenous students and run an access centre where they could come for help and as a home away from home, she quickly decided that for UFV to truly embrace Indigenous students, it needed to make the whole university feel like home, particularly given that it is situated on the ancestral lands of the Stó:lō people.

“I myself was well supported and praised when I went to university. I was treated like I was the cream of the crop, but I knew many more Indigenous people who knew so much more than me, who were just as smart as me, but who were not there knocking on the door of the university. We needed them to help rebuild our communities and culture, and we needed them to be educated.”

Having an Indigenous Student Centre and supporting Indigenous students was a great start, but Shirley’s vision went further.

Her administrator at that point was the late Tim Segger, Vice-President Administration, who had responsibility for student affairs. 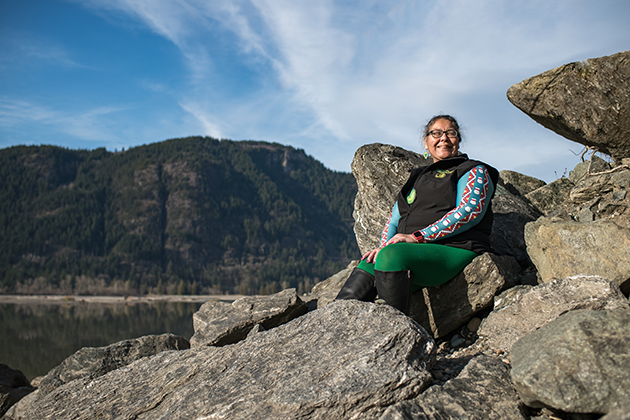 At the same time, Shirley recognized that, like she did when she was an undergraduate, many Indigenous UFV students need cultural immersion themselves.

“A lot of my work is with students who are not connected to their culture,” she notes. “They are seeking teaching and guidance. They were adopted, or in care, or their parents did not have or remember the knowledge of heritage. For some of us, university is the first place we learn about Indigenous knowledge. That’s why it’s so important to be accurate and to have the knowledge here to share.”

Early Indigenizing efforts led to cultural events on campus, the appointment of Elders in Residence, Indigenous protocol at UFV events, land acknowledgments, Indigenous art installations, and the use of Halq’emeylem in the university’s official coat of arms and in names for entities such as the gallery and events like New Student Orientation. UFV’s new strategic plan reflects these and further Indigenization goals and plans.

In 2009 Shirley received the new role of Senior Advisor on Indigenous Affairs, reporting to then–Provost and Vice-President, Academic Eric Davis.

With this new mandate, she worked to implement the recommendations of an Indigenizing report commissioned by UFV in 2005 and prepared by local Indigenous educator and leader Mark Point.

“In a way, I was in the right place at the right time,” Shirley says. “Certain faces and hearts at UFV during my time here have allowed my work to go forward. And that has been key to the success of any Indigenizing initiatives. Administrators, the Provost, board members, faculty members, and staff colleagues have shared the vision. That’s what has allowed us to have success. Universities as an entity don’t change. People in universities do. My job has been to help transform minds and hearts.”

Now Shirley is turning her experience as a leader of Indigenization into doctoral research at the University of BC. In 2020, she received a Canadian Social Sciences and Humanities Research Council (SSHRC) doctoral fellowship to help fund her studies.

Her research focuses on how people need to change in order for an institution to change, and posits that this change can be encouraged through sharing the Sqwélqwel (stories) of educators who have become Indigenizers.

Shirley uses “storywork”, as defined by Stó:lō scholar Dr. Joanne Archibald, with “respect, responsibility, reverence, reciprocity, holism, interrelatedness, and synergy at its centre,” and invites us to imagine a path to Indigenizing the academy through the hearts and minds of educators in post-secondary education.

“I am encouraged to see that here at UFV there are signs that people are beginning to genuinely recognize that it is time to learn ‘from’ Indigenous people.

It is the knowledge from the community that is valuable and it is what we should cherish. I invite my colleagues to join me in Indigenizing our university. This is no easy task, I know, but I believe that we have turned a corner and that the process cannot, and will not, be stopped.”

This article originally appeared in the 2021 edition of UFV’s Skookum magazine as the cover story. See the PDF version of Skookum here.

One Response to The Indigenizer: Shirley Hardman’s journey of discovery guides her mission at UFV