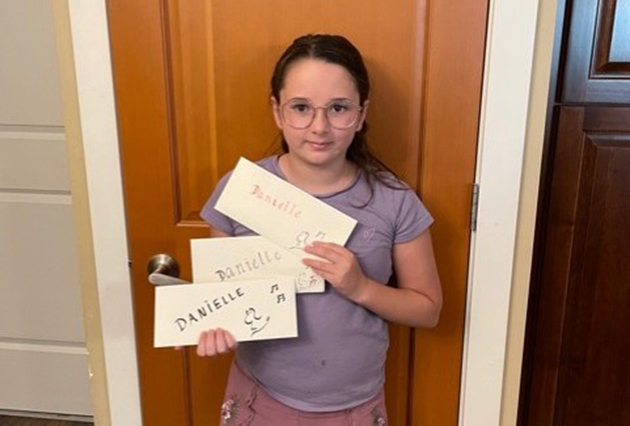 Danielle poses with some of the letters she received from her pen pal Adrienne.

Adrienne gets nostalgic when she thinks about the power of the written letter.

Before the world was connected 24/7 through email and social media, there was a feeling of excitement she would get when a letter would arrive in the mail from a far away friend or family member. Whether it was from her grandmother in Australia, or from her parents in England, there was something about the magic of a letter.

“When I was in school in England, I was getting letters from my grandma,” recalls the now 78-year-old. “It was kind of neat because it was such a different life, hers and mine, and I loved her handwriting. I also remember my dad was a good writer. I really miss his letters.”

Adrienne continued the tradition with friends across the pond and would send postcards to her grandkids when they were young. However, she stopped writing handwritten letters in recent years as she adapted to technology.

“I’m happy learning new skills with computers, emails, and texting,” she says. “I’m not one to hanker for the past. It’s fun to move on.”

This year, Adrienne rediscovered her passion for letter writing when she joined a pen pal program between seniors and elementary school-aged children. This intergenerational connection pilot study was conducted by Dr. Shelley Canning, the director for UFV’s Centre for Education and Research on Aging (CERA) in collaboration with Chilliwack’s Elder College, which provides adults over the age of 50 with access to educational learning opportunities.

“We are heading into an aging society, and we also know that discriminatory views about aging are developed early in children,” says Canning. “So, we are creating opportunities for young children to develop more positive ideas and understanding of people who live with dementia and people who are older. I think it’s a really powerful place to try to change that narrative a bit.” 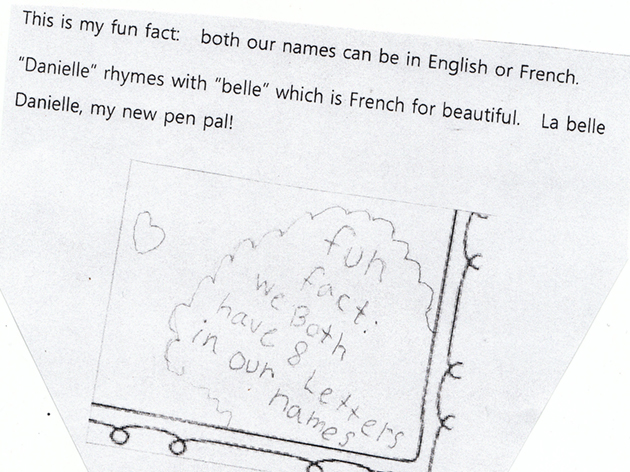 Canning didn’t have to look far to find a sample group to execute this experiment. Her daughter, Elise St-Martin, is a Grade 4 French Immersion teacher at ​​École Clearbrook Elementary in Abbotsford.

“It was mostly talking with my mom and her colleagues where I really first learned about age-based discrimination and how as a society, we have a lot of work to do in this respect,” says St-Martin, who is also a UFV alumna. “One of our main goals in doing this pen pal project in my school was to find out what children already know about aging and what kind of stereotypes they might hold.”

The Pen Pal project at École Clearbrook Elementary started in April, 2021. There were 23 Grade 4 students and 23 students from Elder College who participated. The ages of the senior students ranged from early 60s to 91.

Adrienne was paired with a 9-year-old girl named Danielle, who is close to her own grandmother.

For privacy reasons, there were ground rules. The last names and addresses from both parties were withheld, and the letters would be vetted first by Canning and St-Martin. What was not off limits was asking about each other’s lives (age, favourite color, place of birth, family, etc.) and attaching pictures or art to the letters.

Between the six letters Adrienne and Danielle shared over a three-month span, the duo bonded over dogs, the French language, and compared allergies.

“The airmail letters of the ‘50s to my grandmother were very formal, written on thin paper, with no decorations,” says Adrienne. “By contrast, Danielle’s envelopes and letters were full of colorful drawings. She sent a fun photograph with her sticking out her tongue and making a face.”

Students in St-Martin’s class would draw on the envelopes and letters, adding stickers as finishing touches.

“I wasn’t sure at first if the kids would be kind of disappointed to hear that our letters would be going to older adults versus kids their own age,” says St-Martin. “But that wasn’t the case at all. They were very excited right from the start.”

On top of learning how to write letters and engaging in playful banter with their pen pals, the young students were encouraged to ask questions related to aging.

“The main point that we were trying to get across about aging is that it’s a huge spectrum. It’s different for everyone and it’s not a bad thing,” says St-Martin. “Everyone gets older and everyone ages differently.”

Because of the pandemic, the pen pals were never able to meet in person. But more valuable than a social experiment or an educational opportunity about aging for children, was the genuine connection between two different age groups through an outdated method of communication. One that is personable, fun, always leaves you wanting more, and can’t be duplicated electronically.

“Letter writing is a lost art, so I think it’s great that young people get to experience some of that,” says Danielle’s mother, Laurel Fader. “And, I’m sure that the older generation kind of misses getting some letters and having that era of their lives come back full circle.”

Following up on the success of the Pen Pal project, Canning and team plan to build on their results. Next year, Canning and St-Martin will be partnering again exploring ways to integrate age-friendly learning outcomes into the school curriculum. This research supports the work of UFV’s CERA to promote age-friendly and dementia-friendly research and programs.