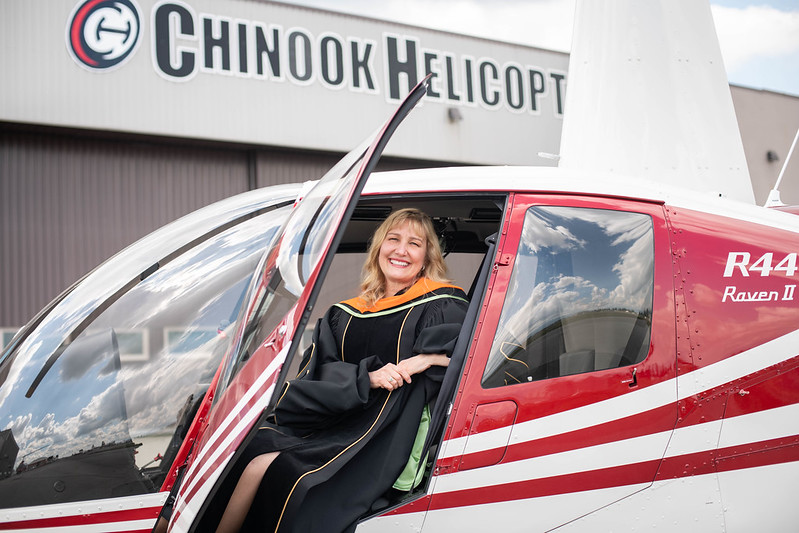 Some kids spend their days on the playgrounds or sports fields, but Cathy Press grew up in the skies.

Her childhood memories in the Lower Mainland consist of her being in a floatplane, side by side with her father, a retired commercial pilot. Together, they would take impromptu expeditions to remote places like Garibaldi Lake back when you could land in the water without a permit. While most passengers are enamored with the unobstructed views of stunning landscapes and the big bodies of water at 8,000 feet in the sky, Press appreciated the beauty in the unpredictability.

On one flight returning from Whistler with her father, she can remember there being a distant thunderstorm creating sunlight streaming from the heavens; and in other places an angry sky and in places treacherous rain.

“I enjoyed, obviously, the picturesque part of it, but I also enjoyed the other side and the variations that could come up,” says Press, who learned how to fly a helicopter at just 15 years old. “Maybe it was the fact that it wasn’t always the same and the elements constantly changed.”

Those early aviation experiences shaped her transcendent career path. In over 30 years in the industry, Press has worn every possible hat. She’s been an office manager, human resources person, and a pioneering instructor. She was the first female helicopter instructor in Canada, a decorated pilot, and a massively successful entrepreneur, taking over her father’s Chinook Helicopters business in Abbotsford in 1997.

For her achievements in the air and on solid ground, Press is receiving an honorary doctorate from the University of the Fraser Valley in 2021.

“I have so much appreciation and respect for the university,” says Press. “I’ve had the opportunity to get to know and work with some of the faculty and staff — and they’ve all been fabulous!”

“It is clear that Cathy’s endeavours exemplify the highest personal and professional standards as both a professional pilot and as a business leader,” says Randy Kelley, Associate Dean of Applied and Technical Studies at UFV, director of UFV’s School of Trades. “Cathy has demonstrated commitment to the spirit of inquiry, learning and social progress and the enrichment of the quality of life and imagination through her long- standing leadership as CEO.”

“I’ve had to work in every position in the company and develop my skills,” says Press, now the CEO of Chinook Helicopters. “By being assertive in understanding the ins and outs of this business and being able to enjoy working with people have been a huge part of my success.”

Chinook Helicopters has received the BC Aviation Council’s Back and Bevington Air Safety Award. Press herself has earned global recognition. In 2019, she was named to the Women’s Executive Network’s Most Powerful Women in Canada top 100 list, as well as being one of three Canadians named to the Enterprising Women of the Year list by Enterprise Magazine.

While Press is praised as a business leader and visionary, she is a teacher at heart. Even though she was brought up on planes, she wanted to be an elementary school teacher. It is no wonder, when she worked for her father at Chinook Helicopters as a young adult, she thrived as an instructor.

“I always enjoyed helping people with things,” she says. “Some people aren’t attracted to that side of aviation, partly because it isn’t as adventurous. It doesn’t take you to many different places in the world. But for myself, I always really enjoyed working with people and their success always made me feel successful.”

But like many people in their 20s, Press’s career hit a crossroads. On the one hand, she longed to take her aviation career overseas, perhaps working in Australia or Southeast Asia. On the other hand, she could permanently set up roots in the Fraser Valley, assume her father’s position and take Chinook Helicopters to greater heights. She chose the latter. 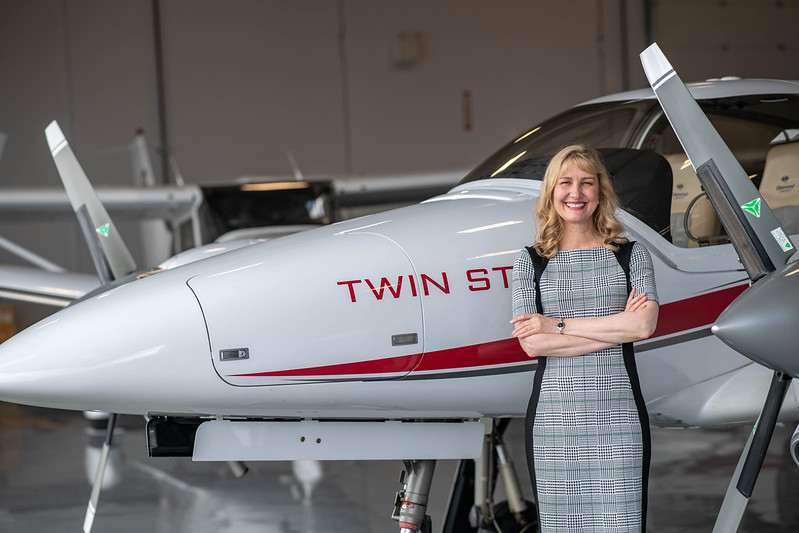 Under Press’s leadership, Chinook Helicopters has enjoyed consistent growth over the past two decades, including quadrupling the number of helicopters to 12 and adding 14 airplanes. Chinook Helicopters recently opened its 18,000 square foot Chinook Aviation hangar. The company’s training school, which has been dubbed the “Harvard of Training Programs” by one of her customers in Asia has attracted students from across the world and is responsible for 25 percent of helicopter training in Canada for more than 10 years.

Her impact has been especially felt throughout the Fraser Valley. From her contributions to BC Aviation Council, to her advocacy to women in the trades, to her long-standing relationship with UFV, Press has made a difference.

Like many businesses, Chinook Helicopters was heavily affected by the global pandemic of the past year. But despite the setbacks, Press has learned over 20-plus years as an entrepreneur how to weather the storm and persevere.

“This past year with COVID has been very challenging,” she says. “But as much as we don’t like to go through these periods, they actually do help us become resilient. You can’t control what happens, but what defines you is how you take it, how you perceive it and how you go forward.”

Going forward, Press envisions more growth, more adventures, and most importantly, more giving back. Sometimes, the teacher in her perfectly blends with her entrepreneurial spirit.

“I find myself asking ‘what can I do to create change? How can I help create jobs?’” Press says. “Because, at the end of the day, we’re here to improve our community and our country. We need to make it so that we grow as a group and leave things better than when we started. Those are the things that really drive me and are driving me for the next 10 years.” 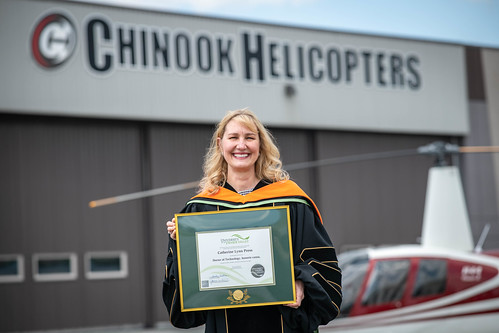