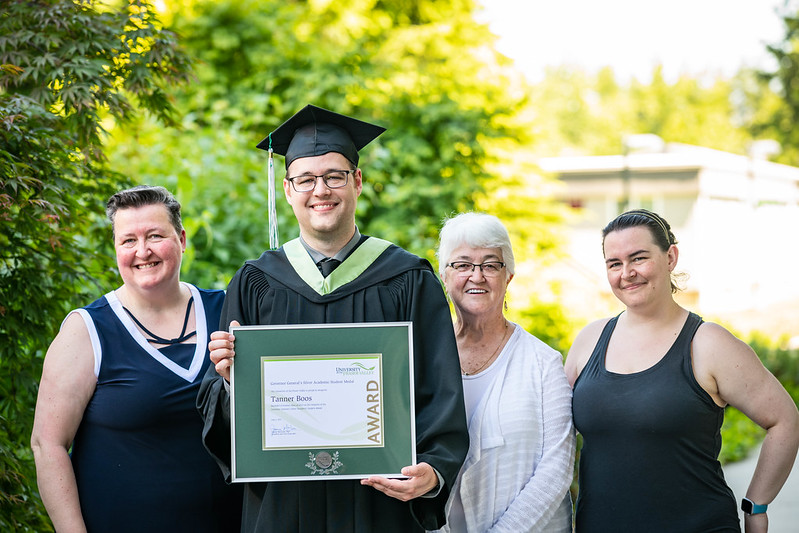 Tanner Boos with his mother (left), grandmother, and sister.

It’s somewhat fitting, at least this year, that the decision of who receives the Governor General’s Silver Medal comes down to numbers.

This prestigious academic medal goes to the student graduating from a bachelor’s degree program at UFV with the highest grade-point average.

And for 2021, that status goes to Tanner Boos, who is graduating with a Bachelor of Science with a math (honours) major and a physics minor.

Boos graduated with a near-perfect 4.29 GPA. In fact, in his last 90 credits, he achieved a perfect 4.33 GPA. That’s quite a number. Boos loves mathematics and hopes to teach at the university or high school level.

Boos always loved math and numbers but it took a few years working after finishing high school to make him realize what his vocational passion was.

“I was working in the real estate industry and I realized that the thing I enjoyed the most about real estate was the mathematics involved,” he recalls. “I always had an aptitude for math but didn’t really apply myself until I started taking courses at UFV.”

His first calculus professor was Greg Schlitt, a long-time faculty member who was a UFV student himself in the 1980s.

“He talked to us about falling in love with calculus. I also love calculus, and have since high school,” recalls Boos. “So the way he taught really jived with me. What I liked so much about UFV is that I really got to know my profs and was so inspired by them, including math professors Greg Schlitt, Robin Endelman, and Ian Affleck, and Tim Cooper, who was an amazing physics professor. There were no 200-person lectures. It was all small classes.”

He attributes his success to a lot of hard work and enjoying his courses.

Boos’s professors are happy to sing his praises.

“Every so often I see a student in first-year calculus course who is clearly thirsty for more mathematics,” says Profssor Greg Schlitt. “It’s not just a question of grades; many students work hard and excel, but are not necessarily thirsty for more. Tanner is such a student, one of an outstanding few I’ve seen over 30 years of teaching. I’m happy I was able to get some prerequisites waived for second-year courses and get him where he needed to be, as soon as possible. He did not disappoint. He has the manner and inclinations of a mathematician, and will represent UFV well in his future training and research.” 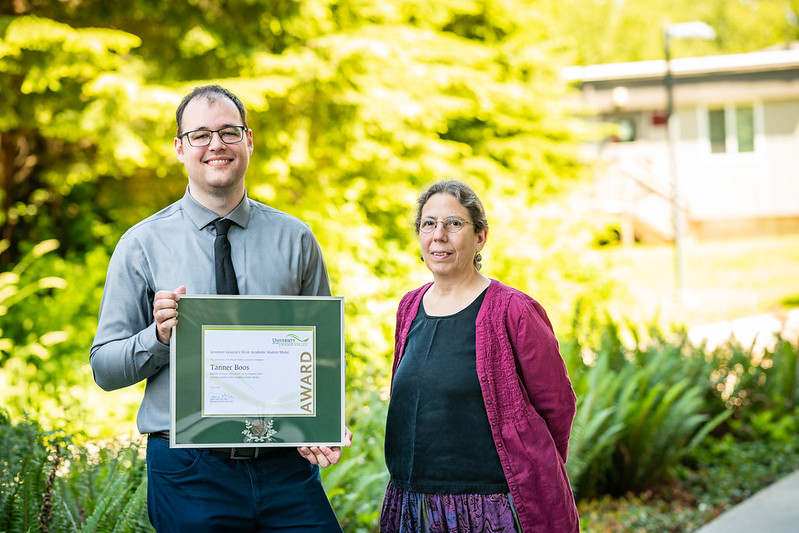 “Not only was Tanner an exceptional student with shining academic merit (he has received an award for Outstanding Achievement in every year of his studies), but also he was exceptionally generous with his varied involvement in extracurriculars and skill in helping others.  He rallied students to take part in extra academic challenges such as the Putnam exam and annual Math Match events, and to take part in the Math Student Association through Discord, he worked to help other students, both as a monitor in our Math and Stats Centre and as an SLG leader, and he regularly volunteered to help new university students in Orientation, and to help local kids when we hosted regional math contests for middle school as well as high school.

“Tanner clearly delights in exploring mathematical ideas, and has shown true generosity of spirit and exceptional leadership during his years here.  Personally, in my 30+ year teaching career, I have not encountered another with more potential for, or more deserving of, success, and none who has touched as many people and as many facets of our community as Tanner.”

He worked in the UFV Math and Stats Centre as a student monitor, was a student leader of Supported Learning Groups, helping lower-level students through difficult first- and second-year courses. He also worked as a private tutor.

Boos is also well known for his aptitude with a Rubik’s Cube. He can solve the puzzles within a minute, after researching techniques, memorizing patterns, and plenty of practice. 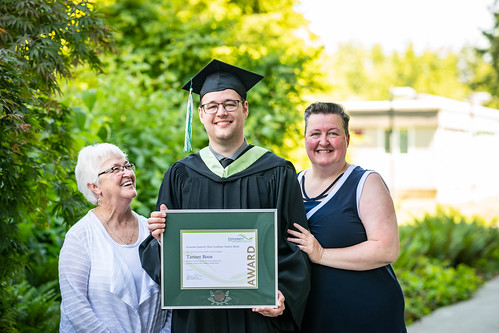