Justin Trudeau was once a teacher. The Rock was a professional football player. Jennifer Aniston was a telemarketer.

The career trajectory for most people will take several detours. People change departments, change companies, and even change industries. A recent study indicates that the average Canadian worker will switch jobs 15 times in their lifetime. Liana Thompson, the director at UFV’s Centre for Experiential and Career Education, has had an atypical career path herself.

“My degree was a bachelor of music; I was actually a professional opera singer,” says Thompson. “Some wonder how I ended up in education, but I look at our professional journeys like a star constellation — everything connects.”

Making those transferable skill connections and expanding a student’s career options is the concept behind UFV’s inventive new Career Mapping Tool (CMT), which recently completed its pilot phase. It is a web-based interactive tool designed to provide recommendations on career options available from various programs. 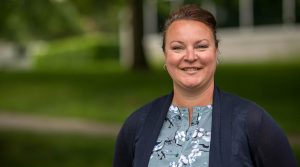 “This new CMT is interwoven throughout the student’s experience from the minute they arrive on campus to graduation,” says Thompson, noting that alumni will also be encouraged to use the tool post-graduation to build their current and future careers as well.

The CMT is derived from a career mapping data project that was started a decade ago by the Pardy Group, a research and information resource company that specializes in education and career planning.

“We create Career Mapping to bridge the gap between academic advising and career advising, and to also shift students away from an old model of career development focused on a linear mindset that no longer works for many people,” says Linda Pardy, the founder of the Pardy Group, who is also the Associate Dean of Students in the UFV College of Arts and a former communications professor.

The technology was in the advanced stages of development last year. What the project partners (UFV’s Business Transformation Office, CECE, and the Pardy Group) needed was a team of ambitious co-op students to lead the project and execute the vision.

They found what they needed in two UFV co-op students, Arfhad Shaikh and Avneet Kaur, who were equal parts smart and driven, and also curious and in the process of embarking on their own career journey.

“As a technical person, when I saw the job posting for a project manager I didn’t see how it fit with my education,” says Arfhad Shaikh, a fourth-year Computer Information System student. “It had zero technical involvement, but I just felt that this position may somehow align with different leadership roles that I would like to do in the future.

“I just thought, why not give it a try?”

Shaikh, an international transfer student from the University of Mumbai, and Avneet Kaur, a second-year Business student, were brought on in September 2020 to serve as project managers, embarking on a several-month project that would challenge their limits.

On top of both being first-time project managers working 35 hours a week, they also carried full course loads.

“I will say this was one of the most important learning opportunities I have chosen during my journey at UFV,” says Kaur. “And it wasn’t as simple as it looked because there were a lot of complications.”

Despite the growing pains of undertaking a massive initiative, both students wore multiple hats. As project managers, they oversaw business analysis, the tool’s security, testing, resource planning, marketing and branding, and most importantly, communicating with stakeholders and managing expectations. And like many new hires in 2020, the pair had to adapt to working remotely full-time.

“We have two students that are just stellar — they’re just incredible,” says Thompson. “And we need to tell their story because they’re a great example of students who take the many work-integrated learning opportunities that are available at UFV and how they gained that unique, early work experience.”

There were four phases to the project. The initial phase focused on research and orientation on the technology and project. The second was the planning phase, which involved collaborating with CECE and BTO on rollout strategy. The third was the execution phase, where the group conducted a series of user training sessions for the pilot program.

“We actually came face-to-face with a lot of realities of a corporate environment,” Kaur notes.

And the final stage was the marketing and branding phase. “We were tasked with creating awareness among students that this tool was at their disposal,” said Kaur.

The two students’ co-op positions officially ended at the end of April, but CECE and the BTO have offered to extend their contract until August, which Kaur has already accepted. Shaikh, on the other hand, will be starting a new co-op term with a different organization. But he is grateful and appreciative of a hands-on experience and acquired skills that he can take with him in whichever career he selects, which he and many have learned, can be a lot of things.

“The project management of the Career Mapping Tool was definitely one of the major parts of my education journey, but it was more about building our professional selves,” Shaikh said. “So, even a simple thing like communication and team building can take you a long way. I think those areas were definitely nourished in this experience here at UFV.”

The development of the Career Mapping Tool was generously funded by RBC Future Launch.