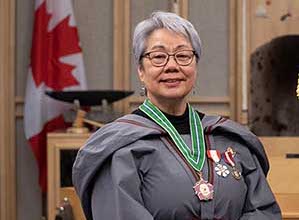 UFV’s Peace and Reconciliation Centre will launch a series called Peace Talks on April 14 with a session that examines the Crown’s role in Canadian governance, particularly as it relates to Indigenous rights.

The event will be presented via Zoom, from noon until 1:30 pm.

“We often talk about conflict and the devastating wide-reaching impact on all aspects of human development,” says Shivji. “With Peace Talks by PARC we are intentionally creating content that will, we hope, serve as a catalyst to strengthen the bond between people within our human fraternity.”

The first talk, titled The Crown as an Agent of Reconciliation?, will focus on the role that the Crown plays as a buffer for Indigenous peoples in their relationships with government.

Some Canadians might be thinking ‘maybe it’s time for the monarchy to go’ when they see news coverage of the Governor General or members of the Royal family behaving badly. But the Crown has a special role to play in Canadian governance.

“Our focus on the individuals who hold these positions can obscure the important role the Crown has played as a buffer for Indigenous rights against the worst excesses of settler colonialism,” explains Dr. Keith Carlson, Director of PARC.

The Crown as an Agent of Reconciliation? is posed as a question and in a way that will accommodate discussion of the past, present, and future.

“The ‘Honour of the Crown’ might sound like a quaint and antiquated idea, but it continues to be a meaningful buffer protecting the rights of Indigenous people from the excesses of majority rule. In other countries where the positions of head of government and head of state are often held by the same individual, the line between what is in the general good and what is in the majority interest can easily become blurred,” notes Carlson.

Prime Minister Justin Trudeau announced the appointment of the event’s keynote speaker, Eva Qamaniq Aariak, as the new Commissioner of Nunavut earlier this year. (The Commissioner’s role is much like that of a Lieutenant Governor of a province: head of state but not head of government.) Ms. Aariak has been a lifelong champion for Nunavut and Inuit languages and culture. Throughout her career as an educator, journalist, entrepreneur, public servant, and elected official, she promoted the use and understanding of Inuktut.

As the first Languages Commissioner of Nunavut, Ms. Aariak also helped make Inuktut a working language within the territorial government and recommended to the Nunavut Legislative Assembly the groundbreaking Inuit Language Protection Act, which was subsequently passed into law.

Ms. Aariak was elected as a member of the Legislative Assembly of Nunavut and served as Premier of Nunavut from 2008 to 2013.

“We invited the Commissioner because in our view she would provide a powerful and distinct voice given her personal experience and political career. We also want to ensure that northern Inuit issues are better represented in political and academic discussions that too often take place in the south and focus on the south,” Carlson noted. “The goal is to help people think critically and creatively about the role the Crown can play in advancing reconciliation.”

The April 14 event will also feature Dr. Keith Carlson, PARC Chair and Director, as host and moderator, and Dr. Barbara Messamore of the UFV History department, a well-known expert on the role of the Monarchy and the Governor General in Canadian political history, and the author of Canada’s Governors General, 1847-1878: Biography and Constitutional Evolution.

The program will be followed by a question and answer session.