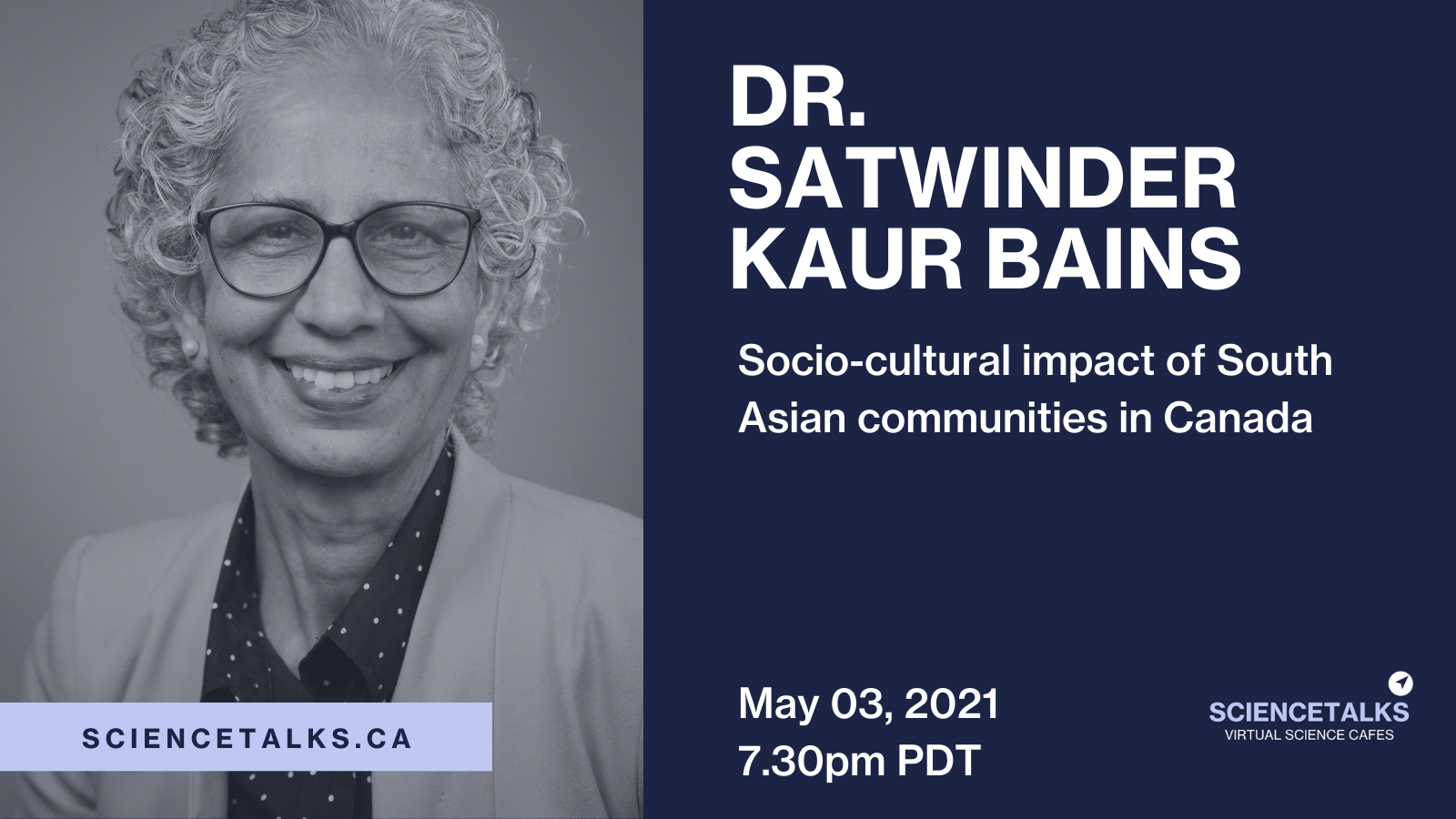 Whether you are a descendant of the original South Asians who immigrated to Canada in the late 1800s, or you are a recent transplant from India, being understood and accepted into Canadian society is still a struggle, according to Dr. Satwinder Bains, the Director of the South Asian Studies Institute at UFV.

“We still live in two different worlds,” she says. “But everyone’s goal is to be a part of Canadian society.”

Bains is opening up this discussion to a wider audience as part of the Science Talks virtual series on Monday, May 3 at 7:30 pm. She will speak on the socio-cultural impact of South Asian communities in Canada. Register for the talk here.

“This talk is for anybody who has an interest in society, whether it’s because of the need to be educated or the need to build bridges and community,” Bains says.

Bains herself immigrated to Canada from northern India in the mid-1970s. The daughter of a parent in the military, she was brought up in post-colonial, Christian-designated English schools and attended a Catholic all-women’s college. But even with a broad education and exposure to other cultures, upon arrival there were growing pains adapting to life in Burnaby.

“By the time I came and then integrated into society, I felt like the survival stages lasted  about 15 to 20 years,” Bains says. “Those years are spent trying to establish yourself, to have a home, to build the finances, all the while adapting to a new culture and government policies that affect us all.

“After that, you lift up your head you look around and you say, ‘okay, what can I do? How can I affect society?’”

Entering the education field and promoting dialogue has been Bains’ way of preserving her culture and helping the South Asian Canadian community play a prominent and influential role in Canadian society. She routinely has in-depth discussions with her family, as well as students and faculty, about addressing issues, raising questions, and facilitating change.

As an associate professor in UFV’s Social Cultural Media Studies department, Bains’ research and expertise focuses on migration, settlement, and integration; cross-cultural education and curriculum implementation; race, racism, and ethnicity; and identity politics. Her research has been published in several international publications and academic journals, and she serves on numerous committees and organizations locally, nationally, and internationally.

In her upcoming Science Talk, Bains’ goal is to strengthen community and to remind the public that “we’re all in this together.” She wants her audience to gain a better understanding of the culture of South Asian Canadian residents — from new immigrants to those that have been in Canada for several generations.

“We are a very committed and very hard-working group,” she says. “We want to establish roots in the community — we want visibility in both of our efforts and our needs. And, we want to do better than the last generation. So, those three things really motivate us to create homes, societies, and culture, wherever we live.”

Creating those societies has been especially tough in the past year with both the global pandemic and social unrest. Bains passionately speaks about continuing to push for change and understanding.

“The fact that we’re a fragile society, especially now, it is critically important to keep building because we don’t want these moments to pass and say we should have done something,” Bains says.

To find out more about Dr. Satwinder Bains and the work of the South Asian Studies Institute at UFV, check out the Science Talks presentation on May 3 via Zoom. Register at https://www.sciencetalks.ca/.

Digital mapping research position led to career job for Lyndon Hunter
New Career Mapping tool to be game-changing for students: Including the ones who led its development