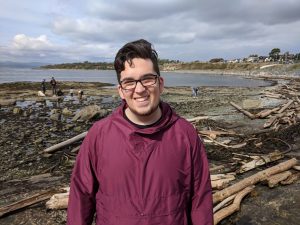 When UFV Computer Information Studies student Mykal Machon realized that many local small businesses were in trouble because of the temporary closures and social isolation brought on by COVID-19 in mid-March, he wondered if his particular skill set could be of help.

Machon, who recently finished his fourth year of studies at UFV, working towards a BCIS degree with a concentration in software development, decided that he would help small businesses get the message out about whether they were still open or how their operations had changed.

And the Support Local Fraser Valley website was born.

What made you decide to create the website about businesses being open in the Fraser Valley in the time of COVID-19?

Until recently, I worked for a small company that focuses on both real estate and small business investments called Aprario Group. While working at Aprario Group I learned about the economic, moral, and societal benefits that small businesses can have on their immediate area, and even their respective cities/towns.

I also got to spend time with founders and owners of small businesses on a daily basis and saw how much hard work, love, and thought went into everything small businesses do, and how special so many of them are to so many people.

So naturally, when most of these businesses had to shut down temporarily due to COVID-19, small businesses were very front of mind for me. As a web developer, I wanted to find a way for these businesses to connect with people online but didn’t know how or what I could do that could achieve that.

While all this was on my mind, I saw a tweet from a developer in Minnesota named Matt Varughese who had developed a very similar site from Oklahoma (okforok.com) that listed local businesses and how to help. I reached out to him and asked if it would be alright for me to work on something similar, which he encouraged, so I got to work.

How did you go about designing it?

I wanted something above all would put emphasis on supporting local businesses in the Fraser Valley right now, which is why each business’s card on the site has:

From an aesthetic perspective, I was definitely inspired by Abbotsford’s downtown business community.

I went with pastel, inviting colours with a focus on greens and shades of blue, as well as both a modern sans-serif font and a more sophisticated, rustic feeling font, which I felt represented the mix of businesses that can be found downtown.

I also had help from an amazing local artist, Taylor Krulicki, who put together the logo for the project, and was awesome to work with. The logo features a delivery crow, carrying a takeout bag; this was a play on delivery pigeons, with a local animal (the crow) and the primary method in which people could support most businesses at the time, which was takeaway or curbside pickup.

How did you gather information?

Initially, I gathered information from family and friends, and some small business owners I knew how to reach out to.
I wanted to make this list as inclusive as possible, which is why I  encourage people to reach out and submit their own! I was originally going to have a form on the website where people could fill out all their info but for the sake of time, I ended up just going with a simple contact form. Luckily, people still got in touch and we’ve added seven businesses to the list submitted by people in the community.

How has the response been?

The response has been great!

We had two major spikes in usage the first being when I released it to family and friends and the second being when UFV shared it across its channels.

I’ve tracked how many pageviews the site has received as well as how many times users have clicked the main “support” button and I’m proud of both numbers:

the main support button was clicked 286 times, of which I hope at least a few resulted in sales or donations

How do you feel about the project?

I’m really happy with how everything turned out!

My only goal in doing this was to use my skill set to provide some support to local businesses (and the people behind them).

The fact that UFV ended up sharing it across their social channels, and that I had so many people reach out and share it as well really speaks to the importance of community and what these local businesses stand for.

Moving forward, as COVID-19 is still a very real threat to many people, and it’s looking like lots of local businesses will continue to have online ordering as an option moving forward, I’m looking for new ways to support local in the Fraser Valley.
The support I’ve felt for working on the site so far has been extremely rewarding and has really encouraged me to think about other ways I can help out in the community.

What drew you to computing studies?

For almost as long as I can remember I’ve had an interest in technology in one way or another.

I think it started when I was getting into video games at around age 10 or 11; which later that year lead me and a few close friends into video game development through a program called GameMaker.

GameMaker, as the name would suggest, is a program that lets you make games with little to no programming experience. This was sort of my first introduction to computer programming and probably the first clear indicator of my interest in computing.

From there, I went on to take computer programming courses through both my middle and high schools. My middle school computers teacher Mr. Clarke (from Mt. Slesse Middle School), in particular, was a massive driving force in my early learning. He pushed me to continue learning outside of the classroom and would take time out to review my code, leaving notes and links to resources where applicable. He was passionate about a lot of the same things I was at the time (computers, programming, and video games). I think that as a young person, having a teacher who I could relate to and identify with, take the time and really encourage me to continue on inspired me to pursue things even more.

From middle school on, a degree in computers and/or programming was always a personal educational goal.