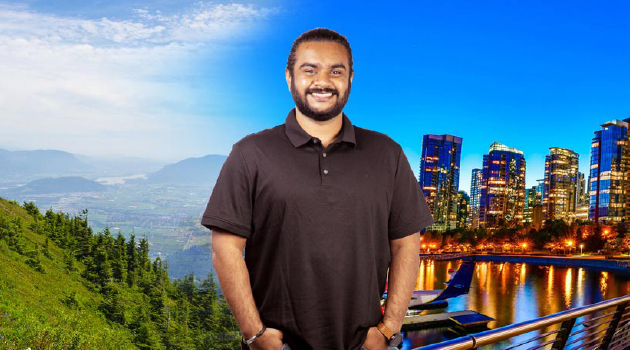 If you’ve been to the UFV Careers home page lately, you might have seen some familiar faces.

As part of a larger campaign to increase local and national awareness of UFV as an employer, Human Resources at UFV turned to our own employees to tell the UFV story.

Working with the UFV Marketing team (part of University Relations), HR has launched a new web presence and marketing campaign that asks the question ‘career or lifestyle — why not both?’

And the stars of the show are actual UFV employees, including Satwinder Bains, Shirley Hardman, Derek Ward-Hall, Joel Feenstra, Arun Varghese, and Joanna Sheppard. Each tells a unique story about how UFV allows them to pursue both a fulfilling career and personal passions.

They are featured in mini-stories on the site, and in a new HR recruiting video.

For newcomer Arun Varghese, a technical analyst in UFV’s IT department, “why not both?” refers to blue skies and city vibes. Originally from Qatar and a recent UFV graduate, he started at UFV as a student worker and is now a full-time employee.

“I love hiking. I grew up in Qatar where hiking was not really possible so it’s special to live in a scenic place that’s not overcrowded,” he notes. “But I still enjoy big-city culture and crowds from time to time.”

Working at UFV means he can live close to nature and still hit the city when the craving strikes.

For Shirley Hardman, Senior Advisor on Indigenous Affairs “why not both?” means being immersed in academia and supporting Indigenous people, ensuring that they are included and reflected at UFV.

“The rich, academic discourse here at UFV feeds my soul as I witness lives being transformed and hearts being touched. Then at the end of the day, I can go home to Shxwhá:y Village, sit by the river on our sacred ancestral land, and look forward to the salmon returning next year.”

Breanna Willock, a marketing strategist in University Relations at UFV, worked on the project with the Human Resources team. Relatively new to UFV herself, she was overwhelmed by the enthusiasm that the employees featured brought to the campaign.

“We knew that we wanted to have a storytelling component to our approach to employee recruitment,” she notes. “I was surprised by how easy it was to find authentic and compelling stories about what UFV is like as a workplace. In the short time I’ve been here, I’ve been inspired by the genuine commitment to collaboration, and people-driven culture here at UFV. It’s contagious.”

Marnie Wright, AVP of Human Resources at UFV, says that the revamped web presence is an important part of a strategy to make sure that UFV is visible and attractive to millennial jobseekers.

“We are living in a digital age and job seekers are making decisions based at least part on an employer’s web presence,” she notes. “The labour market is currently in a highly competitive state so it’s important to make a positive initial impression. The way that most people are looking for work these days is on their phone during a break from a job they already have.”

Wright said that the wave of baby boomer retirements is adding to the recruitment challenge for UFV and other employers.

“Because of population dynamics and demographics, the active workforce is getting smaller, and will continue to do so until around 2030.”

Recognizing that many UFV applicants are from outside BC, especially for faculty positions, the new Human Resources web pages emphasize the beauty of our natural environment and the livability of the Fraser Valley.

“We wanted to highlight the benefits of living and working in the Fraser Valley, for applicants who might be checking in from snowy New Brunswick or Ontario.”

The new Careers and HR web pages are part of a broader marketing strategy that will also include targeted social media advertising on platforms like Facebook and Linked In, as well as out-of-home advertising such as bus shelters or cinema ads.

“We want to focus on specific people who work in the fields in which we are recruiting,” Wright says. “For instance, if we are looking for a facilities manager, we will target people whose occupation is listed as that or something similar on Linked In. This will produce better quality applicants for us to choose from. Digital marketing channels allow us to be much more targeted in our approach and the use of social media will help us activate UFV’s extensive network of supporters and referrers.”

“An applicant might look at that page and realize that we offer other perks and benefits that they weren’t previously aware of, such as pensions, professional development, health spending account, and the development and training allowance.”

UFV will continue to seek the best and brightest in their fields, becoming a destination for not only learners, but leaders as well, Wright notes. Check out the redesigned site and the latest job postings here.