UFV’s newest building was formally opened on January 10 with a ceremony grounded in Sto:lo cultural traditions.

Building K, the former Phoenix restaurant and Finnegan’s pub that UFV purchased from the Esposito family in 2018, has been transformed into a classroom and lab complex after a major renovation. A total of 10 classrooms, two drop-in student labs, and one meeting room have shifted into the renovated and renewed Building K, bringing students, staff, and faculty from multiple departments into new spaces.

At the opening ceremony, following Sto:lo protocols, witnesses were called to observe the ceremony and share their insights about the new building and the work that went into the transformation. Witnesses included carver Rocky LaRock, UFV president Joanne MacLean, UFV janitorial coordinator and Haida Nation member James White, SUS president Tripat Sandhu, associate director of building systems Sheldon Marche (who is Qualipu from the Mi’kmaq in Newfoundland), and provost James Mandigo. 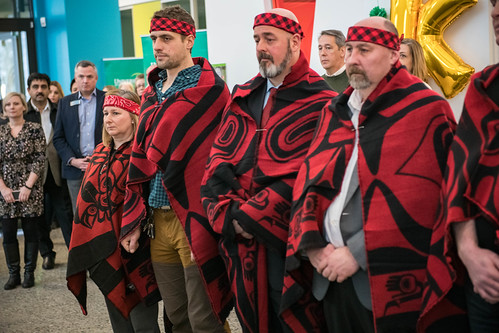 Representatives of the companies and departments involved in the renovation were thanked and honoured at the ceremony. A “family”, consisting of representatives of UFV, ceremonially thanked the people who worked to complete the building renovation. Those honoured included Mark Goudsblom and Shelley Young of Facilities Management, Dean Christensen of IT, and Dennis Kushminder and Kyle Shultz of Chandos Construction, who represented the contractors.