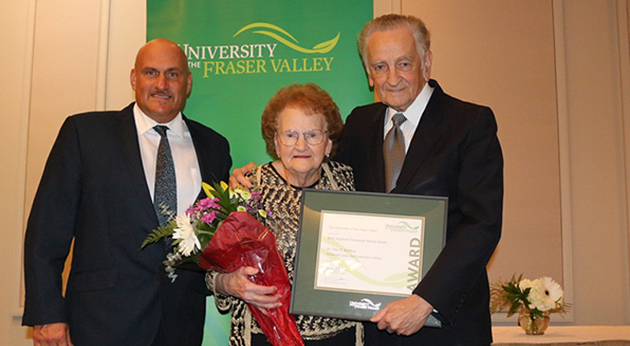 John Redekop (right) with his wife, Doris, and Andrew Urquhart, son of the late Betty Urquhart.

Dr. John H. Redekop of Abbotsford doesn’t believe in doing things in half measures. If you ask for his help and he agrees to assist, he gives his all.

And in the matter of raising funds for Stillwood Camp and Conference Centre, that meant more than 20 years of volunteer work garnering support and funding for a major revitalization of the property, situated in a beautiful setting near Cultus Lake.

Redekop is the 2019 recipient of the UFV Betty Urquhart Community Service award, in recognition of his volunteer fundraising activities on behalf of several organizations.

Betty Urquhart was one of the first employees of the university and believed strongly in volunteering and giving back to the community. While Betty passed away in 1995, UFV keeps her memory alive by honouring a person exemplifying her commitment to life-long learning and community.

Redekop received the award at the UFV Retirement Dinner.

“I am absolutely delighted to receive this award from our own local university,” noted Redekop. “Betty Urquhart set a great example in community service. I am both honoured and humbled to receive the award named for her.”

In the late 1990s, Redekop was asked to help revitalize the Stillwood Camp and Conference Centre. The entire facility was desperately in need of replacement and renewal. Redekop began his retirement years with a commitment to Stillwood. 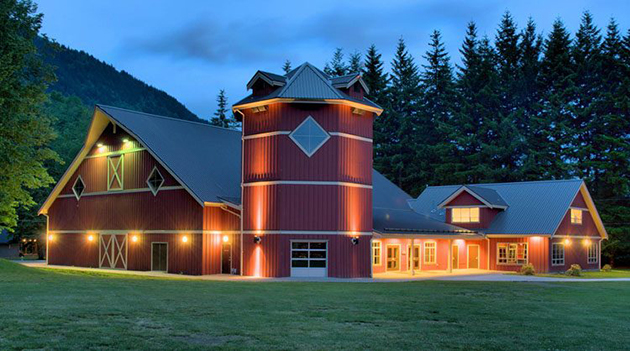 The gym at Camp Stillwood, one of the many buildings that John Redekop helped raise funds for.

He led the volunteer board in developing a vision for a world-class camp. He played a key role in making that vision a reality. In addition to holding governance positions, he also served as volunteer fundraiser, and was responsible for generating approximately 95% of the funds raised.

As a relentless advocate with a strong ability to articulate the vision, Redekop was able to motivate hundreds of individuals, businesses, and professional agencies to donate funds or volunteer their services and expertise. In his 1,612 person-days of volunteer time (the equivalent of six years), he raised approximately $13 million along with an additional $400,000 worth of supplies from regional suppliers, and a further 5,000 person-days of donated labour. The fact that he led by example and gave so much of his time to this task is a major reason why hundreds of people followed his example and became donors or volunteers.

“When I see a hundred children frolicking in the pool, when I hear 400 young folk chatting excitedly in the amazing dining hall, when I observe more than 400 community children, then my often-challenging 21 years of fundraising for Stillwood are amply rewarded. Being recognized with this award is an added special blessing!”

More recently, Redekop was asked to fundraise for the Tabor Home Society, a large seniors’ home in Abbotsford. In the 10 months ending in June 2019, he raised $3.5 million in support of this organization, proving that even in their ninth decade volunteers can have a profound impact.

Redekop was born in Saskatchewan and moved to Abbotsford in his youth. He attended Mennonite Educational Institute and UBC, then earned a master’s degree at Berkeley and a PhD at the University of Washington. He taught at Wilfred Laurier University in Waterloo, Ontario, for many years, then took early retirement and became a scholar in residence and then adjunct professor at Trinity Western University.