The University of the Fraser Valley welcomed supporters from the community to the Abbotsford campus on November 13 for Town & Gown, a fundraising dinner that celebrated the transformational power of a UFV education.

At the end of the evening, a grand total of $245,462 had been raised to support scholarships, bursaries, and enhanced learning opportunities for students. The proceeds from Town & Gown include donations, ticket and table sales, live auction revenue, and sponsorships. Of the total raised, $100,000 will go toward a new Peace and Reconciliation Centre, and the remaining will fund new scholarships.

“We’re very proud of our students and our alumni, and of the impact they’re having, and will continue to have, in our community and beyond. And this would not happen without your help.

“Many of you are what we call Ripple Makers — your contributions echo out from UFV like ripples across water. Through your support of our students, you can transform society. You can change lives by hiring our graduates. By giving our students work experience. By donating and providing bursaries and scholarships. And by mentoring. This is a circular relationship. UFV changes students and the community, but UFV is, in turn, transformed by the community.”

Several new donations were announced during the evening.

A total of 190 new $750 scholarships were pledged, including an $18,750 donation from MacLean and her partner Maureen Murphy that will be endowed to produce an annual scholarship in perpetuity.

Fran Vanderpol announced that the Oikodome Foundation, her family’s charitable organization, will be supporting the new Peace and Reconciliation Centre within the UFV College of Arts with a donation of $100,000.

Community guests mingled with UFV leadership and student ambassadors, who shared stories about how their UFV experience is changing their lives for the better.

UFV kinesiology student Aziz Ghafoor spoke about how the support of donor-funded scholarships and bursaries makes it possible for him to focus on his studies and his goal of being accepted into medical school.

“At times, my dream of med school seems impossible,” he said. “The financial burden of tuition is significant. Then there is the cost of rent, books, and other necessities. My path is winding and at times incredibly challenging. It requires hours of studying every day, maintaining volunteer commitments and other related extracurricular activities.

“Bursaries and scholarships tipped things in my favour. They changed my life. These are representations of your generosity. They have allowed me to pursue my academic goals and to completely focus on my studies and related extra-curricular activities.”

Nursing alumna Christine Drew, who graduated in 2019 and is now working at Abbotsford Regional Hospital, said that the support of scholarships allowed her to work less, study more, and spend more time with her three children.

“As the grateful recipient of eight scholarship and leadership awards during my nursing degree, I’m here to tell you, it made a world of difference,” she noted.

“The guilt of making my family sacrifice for the four years while also feeling the stress of a financial burden was tough. When I received my first scholarship, I immediately felt a weight lifted off my shoulders. This financial support gave me the opportunity to focus on both my family, and school. I was able to spend more quality time with my kids, while also achieving my academic goals.”

Jesse Wegenast, who earned a BA in geography in 2012, was named Young Distinguished Alumni for 2019 for his wide-ranging and extensive community work.

As a pastor with 5 and 2 Ministries and a resource person with Archway Community Services who serves as an intermediary for those who are unhoused, poor, mentally ill, aged, and struggling with addictions, Wegenast’s actions have had a profound impact, helping to reshape conversations around support, public space, addictions, and the lack of accommodation (both social and physical) for Abbotsford’s most marginalized populations.

He credits his UFV education for helping prepare him for the roles he has taken on.

“UFV in particular helped me to understand underlying systemic issues that create social problems, and gave me the tools to begin to address those problems.”

2019 Distinguished Alumni award winner Sonya Sangster’s UFV education gave her the wings she needed to fly airplanes and to be a leader in helping women in the international development field.

The Bachelor of Business Administration in Aviation degree she earned from UFV in 2006 prepared her to be a professional pilot, but also provided the academic foundation she needed to continue her economics studies at the graduate level and apply what she learned in her work in the international development field as CEO of the Tekera Foundation.

“It’s interesting how life brings you down a path,” she said. “Combining business and aviation studies opened so many doors for me. If I hadn’t taken the BBA Aviation program at UFV I wouldn’t have flown planes, and wouldn’t have seen what I saw in other countries, which is what inspired me to pursue humanitarian work.”

Previous Distinguished Alumni award recipients were acknowledged at a reception prior to the Town & Gown dinner.

Parm and Satwinder Bains received the inaugural Loyalty paddle for donating to UFV for more than 15 years.

Nik and Marnie Venema received the inaugural Legacy paddle in recognition of their including of UFV in their estate plans.

And RBC, represented by Doug Turner and Jodi O’Hara, received the Donor of the Year paddle in recognition of a $300,000 donation to establish the Centre for Experiential and Career Education at UFV.

Returning Media Partners were The Patrika and Black Press. 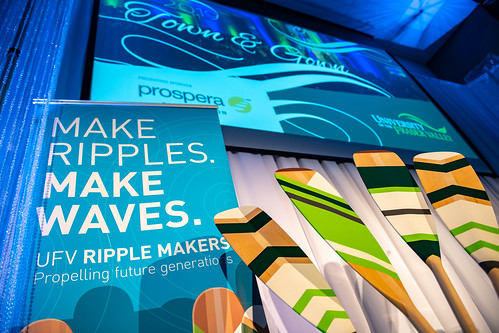