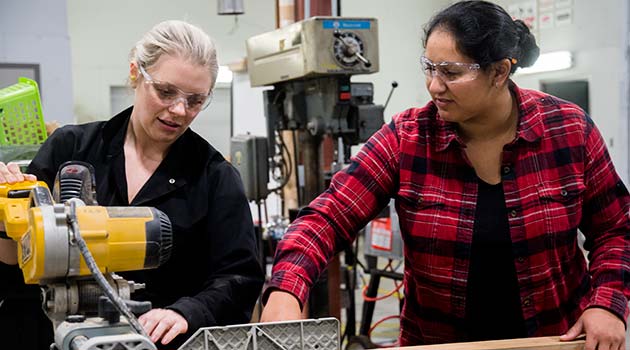 Starting a career in trades may be unconventional for a woman, but it has its benefits.

Ask Red Seal carpenter Emilie Biela. After high school, she landed a summer job with VGS Contracting, a local construction, equipment supply, and installation company in the commercial greenhouse industry. One day, her boss asked her if she would like to be sponsored for an apprenticeship.

Emilie loved the smell of wood. And she had spent many happy moments in childhood helping her dad with building and renovations on the family’s homestead. She signed up for her Level I Carpentry Apprenticeship with UFV Trades.

Because Emilie had good grades in high school classes, some people expected her to pursue a traditional academic path and questioned her career choice.

“Just because I have the marks doesn’t mean I need to go to university,” Emilie says. “To earn a degree, you may have to spend five to seven years. And will there be jobs in your field when you graduate? The trades have high starting wages. And they increase faster than many other jobs.”

In fact, the average wage of a woman in trades is double that of a retail job. “Most retail jobs are paid minimum wage,” Emilie points out. “You can’t live off that. With a career in trades, you do not have to live paycheque to paycheque.”

Emilie is one of thousands of British Columbians to find well-paying careers in the trades each year. With an aging population fuelling waves of retirement, more people are leaving the workforce than entering, which creates an acute shortage of skilled tradespeople.

Statistics Canada and the Canadian Apprenticeship Forum report that Canada needs to attract 167,739 new apprentices over the next five years just to keep pace with current demand.

That opens up opportunities for women like never before.

Thriving as a woman in trades

Traditionally, the skilled trades have been male-dominated. A Statistics Canada study shows that fewer than 4% of

people employed in the trades are women.

“Women who choose the trades work harder to prove themselves,” Emilie says. “You have to stand out. You cannot just be as good as the guys. You have to be better.”

This can be intimidating, especially for women who have not had the chance to familiarize themselves with tools and machines in their past.

“Every fall, we run an Explore Trades Sampler program just for women to give them a safe space to learn,” says Anna Mayo, Coordinator for UFV’s Industry Services and Part-time Trades. “They can get hands-on experience in a supportive, less competitive environment. After three months, students have a much better idea if a career in trades is for them. They’ve also gained useful skills and earned industry certifications, which gives them a leg up in the workforce.”

According to Emilie, even smaller women can consider a job in the trades. “It’s about learning to work smarter, not harder,” she says. “Even if you don’t have great physical strength, you can find ways of doing things that work for you. There are guys who cannot do heavy work either. Different people have different skills. I’m not the strongest on my team, but I pay attention to details and I see things that my coworkers may not notice.”

Valuing the skills of each team member on a job site is the hallmark of a good leader. “Your boss and your coworkers will stand up for you if people question your place as a woman on the job,” Emilie says. “Your team becomes your family. And you have each other’s back.”

That said, Emilie also adds: “Don’t be afraid to stand up for yourself. If you’re not respected, have a chat. If respect does not follow, look elsewhere. You deserve to find a supportive workplace.”

Currently, Emilie works for On Side Restoration in Abbotsford. She loves the variety that her work affords. “I’ve built barns, custom homes, movie sets,” she says. “From one day to the next, I may set trusses, or install baseboards. Or even cut fallen trees that have caved a structure. Every day is different and I enjoy the mix.”

Pride in a job well done is one of the major perks of a career in trades. “It’s awesome to see something you’ve built with your own hands,” Emilie says. “There’s great satisfaction in pushing yourself to do something you were not sure you could do.”

Eventually, Emilie would like to become a shop instructor in the school system. “I’d like to tell my story, inspire the next generation, and share my knowledge,” she says.

Last October, Emilie taught carpentry skills for UFV’s Women in Trades program. “I’ve never had a woman mentor through my years as an apprentice,” she notes. “I’ve had male mentors and they were great. But I think it’s important for young girls and women to also have that mentorship from another woman.”