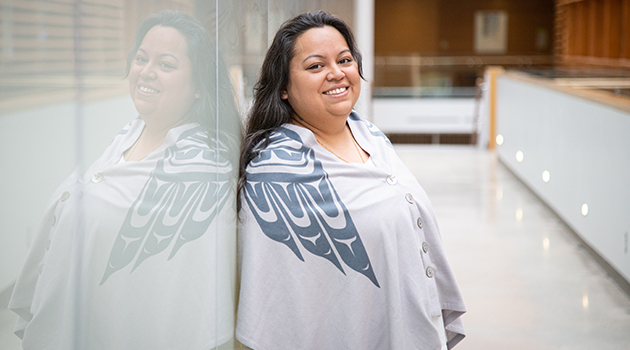 For her approach to encouraging inclusion of Indigenous people’s perspectives and reconciliation, and her commitment to empowering Indigenous communities, Leanne is the 2019 recipient of the Lieutenant Governor’s medal at the University of the Fraser Valley. The criteria for the medal includes student involvement in promoting diversity, inclusion, and reconciliation.

Her willingness to share Indigenous knowledge that is “ingrained in my brain” is part of what earned her the medal.

“Some of my professors have said that I bring to a course as much as I take from it,” Leanne notes. “As I get older, I realize that a lot of what my mother and grandparents were teaching me were Indigenous ways of life and knowing, and that comes out in my approach to my studies.”

Leanne’s post-secondary journey has been a lengthy one.

She graduates June 4 with a Bachelor of General Studies, with a thematic option in global indigenous geography. She has also completed minors in geography, and indigenous studies, and Halq’emeylem and Indigenous Maps, Rights, Films, and Land Claims certificates.

She began taking courses back in 2004 when she completed the Family Childcare certificate. Having caught the education bug, she started taking psychology and business courses, but “life got in the way” and she ended up dropping her courses.

She tried again in the mid-2000s, but childcare for her young daughter was a challenge and she didn’t make it to the end of the semester. She had two more children, and when the youngest was five in 2014 she decided to give university another try, with encouragement and funding from Sts’ailes, her home community.

This included strong encouragement from her First Nations studies professor Gwen Point (who later became UFV’s chancellor). Point expressed confidence in Leanne, urging her to continue her education and noting that she saw the same leadership traits in her as Point had seen in Leanne’s late grandfather Bill William, who was the first elected and longest-serving chief of Sts’ailes. 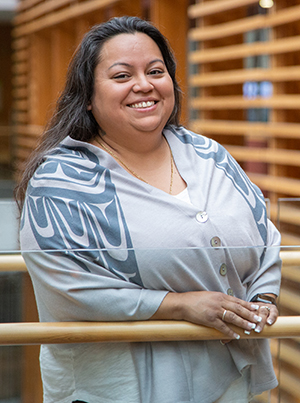 Still, there were struggles. She was juggling full-time school with full-time work and parenting, with a blended family of eight children and numerous grandchildren, several of whom live with her and her fiance at their home on the Tzeachten First Nation.

“My mom passed away in 2015 and it was a challenge to finish that semester. I was going to take a year off after but a course I really wanted came up so I kept at it. In 2017 I stopped working to concentrate on full-time school. Then in the winter of 2018 my grandmother and my spouse’s grandmother both passed away, so that was hard. But the closer I got to the end, I’d keep telling myself ‘don’t’ stop now. You’re almost done!’”

As she progressed through her general studies degree, she noticed that she brought an Indigenous knowledge aspect to many of her projects, topics, and courses.

“And when I talk about Indigenous, I don’t just mean the Stó:lō /Coast Salish culture I grew up in. I have also examined Indigenous ways of knowing among the first peoples of Australia, Japan, and Scotland. When I was studying the relationship of folklore to geography in Scotland it was similar to the Stó:lō stories of landforms.”

From her start at UFV in 2004, through the hiccups along the way, Leanne has always been hungry for more education.

She plans to work for the time being as an aboriginal support worker for the Abbotsford School District, but hopes to pursue a master’s degree in geography or urban planning in the future.