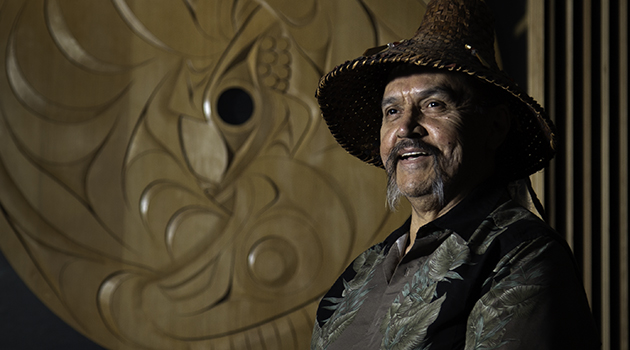 Francis Horne Sr. is a world-renowned Coast Salish master carver whose stirring work has been represented in a range of top Vancouver galleries since his professional career started almost 50 years ago.

For his sculpting legacy and his lifelong commitment to helping and healing others, Horne was recognized with an honorary Doctor of Letters degree at the University of the Fraser Valley at Wednesday morning’s Convocation ceremonies.

“What’s in the wood is already there,” says Horne of his creations. He merely reveals what the spirit tells him exists in the grain.

His lessons in artistic humility started with his own teacher and mentor, Simon Charlie, who told him: “Our hands are only the helpers.”

Emerging from a difficult childhood, he has worked with blade in hand and spirit as guide, revealing much about himself in the wood.

“When I was a child, my step-father was very abusive,” Horne says. “He would get mad if we cried. We were taught not to cry.”

So he has expressed himself through his art, showing his tears in the wood of carved masks instead.

His work has appeared in several publications about high-end Northwest Coast Native Art, including “The Great Canoes” and Gary Wyatt’s critically acclaimed titles.

But perhaps Horne’s most meaningful sculpting has resulted from providing guidance and teaching, rather than from knife or chisel.

He taught UFV’s Indigenous Carving Certificate courses, where he also incorporated his indigenous spirituality by implementing a healing circle practice.

“Everything that was built up in their personal life, their academic life, they learned to release it by talking in a circle — which would set them up for their next week,” says Horne’s wife Brenda, who assisted during classes. “So they go into their studies with a clear mind, and they also take that into their personal life.”

Horne wasn’t only teaching the technical aspects of carving, he was equipping his students with a cultural toolset to process emotions.

That philosophy followed Horne when the couple went to mentor clients in recovery from corrections at Vision Quest Recovery Society.

The serene, mountainous backdrop and river water surrounding those healing circles contrasted with the internal struggles the participants were confronting.

Horne also took groups of clients on strenuous hikes with packs full of rocks, guiding them to release emotional burdens along with the physical weights as they worked through the therapeutic uphill journey.

Many of these men have kept in touch, and Horne considers their children his own grandchildren, as he and Brenda acted as surrogate parents throughout their time at Vision Quest. 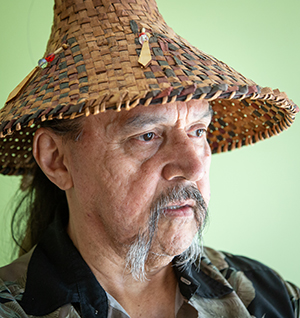 Now Horne advises and advocates for Aboriginal patients at Fraser Health Authority, helping elders who might hear the “residential” of residential care and default to memories of residential schools.

And he also works with youngsters who “hurting elders left words with that they didn’t understand, about residential school, hospitals, institutions.”

With this kind of intervention Horne chips away at the disruptive cycle of intergenerational trauma, sculpting a better future for those in need.

“It’s something that’s in my blood, and my DNA, and my spirit,” says the 64-year-old. “The spirit moves you and you know that you have to reach out and help other people an teach other people.”

Horne found his healing potential after remembering an elder’s advice from his youth: “Go to a waterfall and you will find your power.”

When he was 51, Horne did just that. Every day for a month he bathed and meditated at a waterfall.

“I remember coming out of the water and looking around,” Horne says. “There’s moss, salal, trees and beautiful plants everywhere. I looked at that waterfall, and I looked around, and I thought, ‘I get it.’”

It was such a powerful journey for Horne that he wanted to share it with the world.

“Love and forgiveness is for everybody,” he says. “It changed my life forever.”

Horne is now an advocate for saving the planet’s water supply and hopes the honorary degree he received from UFV will help him elevate his message.

“Everything is full of water, everything is touched by the water,” he says. “Therefore the water is the Great Spirit. It always has been, it always will be.”

With his imaginative artistic creations and spiritual recreations, Francis Horne Sr. has carved a permanent place for himself in the arts — and hearts — of the Fraser Valley and beyond.

The legacy of wood sculpting and graphic arts carries on through his three sons and two daughters.