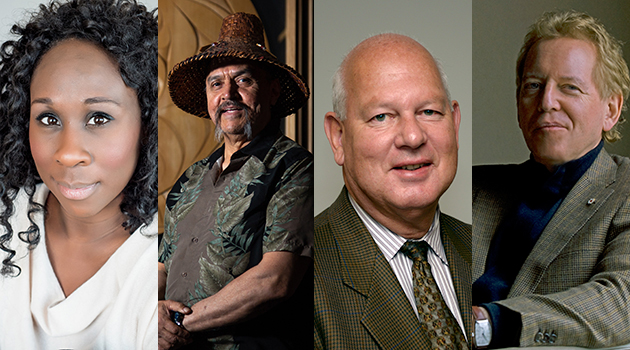 UFV will recognize a BC author with a growing global reputation, a Coast Salish carver, a Chilliwack community builder, and the entrepreneur behind some of the world’s best wine at its Convocation ceremonies on June 4 and 5.

Author Esi Edugyan of Victoria has won the prestigious Giller Prize for Canadian literature twice, including in 2018 for her novel Washington Black, which was also named to a number of Canadian and international Top 10 and bestseller lists.

Edugyan first won the Giller in 2011 for Half-Blood Blues — which was also shortlisted for the several other awards.

Edugyan was nominated for the honorary degree by UFV Provost Eric Davis.

“One of the core values of our university is that of the transformative potential of education. Esi Edugyan’s latest novel aligns perfectly with that value,” he noted. “It tells the story of a young boy who devotes himself to self-education and the transformation of himself from a slave to a free man; and who continually tries to find and/or create community.”

Edugyan will receive her honorary doctorate at the 2:30 pm UFV Convocation ceremony on June 4 at the Abbotsford Centre. The public is welcome to attend.

Francis Horne Sr. is a world-renowned Coast Salish master carver whose stirring work has been represented in a range of top Vancouver galleries since his professional career started almost 50 years ago.

“What’s in the wood is already there,” says Horne of his creations. He merely reveals what the spirit tells him exists in the grain.

Emerging from a difficult childhood, he has worked with blade in hand and spirit as guide, revealing much about himself in the wood.

But perhaps Horne’s most refined sculpting has resulted from providing guidance and teaching, rather than from knife or chisel.

He taught UFV’s Indigenous Carving certificate courses; he mentored clients in recovery from corrections at Vision Quest Recovery Society; and now he advises and advocates for Aboriginal patients at Fraser Health Authority.

Horne will receive his honorary doctorate at the 9:30 am UFV Convocation ceremony on June 5 at the Abbotsford Centre. The public is welcome to attend.

A dynamic, tenacious, and creative community advocate with decades of public service, John Jansen helped pave the way for countless upgrades to education, health care, transit, and other services.

A Chartered Professional Accountant by trade, Jansen was elected as a Chilliwack city councillor and as mayor before serving as an MLA, representing the Social Credit party. During his time in the provincial government, he served as Minister of Business and Immigration, Minister of Finance, and Minister of Health. He was a member of the provincial caucus when Fraser Valley College received university-college status from the government, a key development in UFV’s history.

His leadership with the Chilliwack Economic Partners Corporation led to purchasing property from the Canada Lands Corporation to enable the development of Chilliwack’s Canada Education Park — bringing the RCMP, Canada Border Services, and the Justice Institute of B.C. to locate there along with UFV. This development helped attract many large businesses to the community, providing local job opportunities and further stimulating economic growth.

As a member of council, Jansen was involved in the development of the Chilliwack Airport, and the creation of Townsend Park and Exhibition Field Stadium. Respected and admitted by his peers, he received a legacy award from the Chilliwack Chamber of Commerce, a fellowship by the Certified General Accountants Association of Canada, and a Paul Harris Fellowship from Rotary International.

Jansen will receive his honorary doctorate at the 2:30 pm UFV Convocation ceremony on June 5 at the Abbotsford Centre. The public is welcome to attend.

Intensity, infectious passion, overcoming obstacles by innovation, and an unwavering commitment to his vision led Anthony von Mandl to begin his journey four decades ago. Born in Vancouver and European educated, Anthony, without resources, founded a wine importing firm in Vancouver at the age of 22. Despite difficult initial years, he successfully grew Mark Anthony Wine Merchants, and began to realize his dream: to produce world-class wines in British Columbia’s then unknown Okanagan Valley.

It took until 1994, when Mission Hill Family Estate won the trophy for Top Chardonnay Worldwide in London, that he knew his dream had legs. Mission Hill has since been transformed into an internationally renowned landmark winery heralded as “The Versailles of the Valley” by The New York Times. After winning ‘Canadian Winery of the Year’ for the sixth time, Mission Hill stunned the wine world by winning ‘Top Pinot Noir in the World’ at the Decanter World Wine Awards in London.

Von Mandl’s CheckMate Artisanal Winery, which he created to harness the effects of climate change to make high-end Burgundian-style Chardonnay, has just been awarded a perfect 100-point score, the first ever for a Canadian table wine. After winning ‘Top Pinot Noir’ in London, he built Martins Lane Winery, the most radical Pinot Noir winery in the world. Architecturally stunning, the 6-level gravity-fed winery is carved into a vineyard hillside and the inaugural vintage was awarded 97-points. The family is also a major farmer in the Okanagan and has assumed stewardship of CedarCreek Estate Winery and Road 13 Vineyards.

In 2016, von Mandl was appointed as an Officer of the Order of Canada and he is also the recipient of the Order of British Columbia. He is also a co-recipient of ‘The Warren Bennis Award for Leadership Excellence’. Previous winners include Mikhail Gorbachev, Benazir Bhutto, and Howard Schultz of Starbucks. Anthony is also the Chairman of The von Mandl Family Foundation, supporting cancer research in Canada and the U.S.

Von Mandl will receive his honorary doctorate at the 9:30 am UFV Convocation ceremony on June 4 at the Abbotsford Centre. The public is welcome to attend.