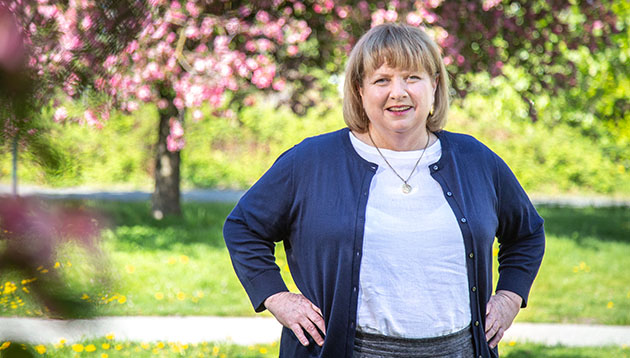 For Seonaigh MacPherson, being a professor isn’t as much a job as a calling.

She was inspired to pursue an advanced degree by her desire to work with refugee nuns in Asia, and the realization that she would require a graduate degree to keep doing so at the professional level.

“I became a professor not so much by intention as by a means of continuing my development as a teacher and non-government organization worker. I was motivated to get my PhD so that I could be of service in the community. And now that I am a professor I view my role through a lens of service.”

In recognition of her community service, Seonaigh is the 2019 recipient of the Faculty Service Award.

Seonaigh has been an associate professor in the Adult Education department at UFV since 2012 and department head since 2013.

The Faculty Service Award recognizes her service work within her department head duties, as a member of the UFV community, as a professor, and in the external community.

Within her department, she has negotiated articulation partnerships with other institutions for the Bachelor of Arts in Adult Education, developed a graduate certificate in Mindfulness-Based Teaching and Learning, and navigated the transfer of the TESL certificate into her department.

In the community, she has partnered with Abbotsford Community Services to improve the preparation of ESL teachers to serve the newcomer population, and led training for mindfulness facilitators.

Her professional service has included serving on the provincial adult education articulation committee, preparing a report for the Government of Canada on benchmark language standards for Canada, and serving as series editor for a scholarly book series on mindfulness.

She is a member of several UFV committees, the Chilliwack Healthier Communities consortium, and the Mindful Communities Initiative. She co-founded a journal, and ran as the NDP candidate in the 2015 federal election.

“I strongly believe in applying my work as a professor to community initiatives,” Seonaigh notes. “The great thing about universities in Canada being mostly public institutions is that we can fulfill our service role more fully. All of my research and community work is collaborative or participatory. I am very fortunate to work in a department and for a university that is extremely supportive of allowing a dedicated service orientation. It means a lot to me to get this award because I work very hard and my primary motivator is to be of service to others. It’s nice to be seen as doing good work.”

“As she developed the Mindfulness-based Teaching and Learning program, Seonaigh worked tirelessly to reach out to people in various sectors. She connected with health, education, workplace, and criminal justice professionals to promote mindfulness,” Richardson says.

Psychologist Rob Lees has worked with Seonaigh in her roles as committee member of the Primary Prevention subcommittee of the Chilliwack Youth Commission and the Addictions Task Team of the Chilliwack Healthier Communities consortium, both of which have shared a common interest making Chilliwack a more ‘mindful’ community.

“The impetus for this was largely due to Seonaigh’s contribution and her raising our awareness about the research around and value of Mindfulness-Based Stress Reduction,” he notes. “This has inspired others to see the value of mindfulness. I believe this fits well with the UFV service award’s criteria of collaboration across boundaries and community engagement.”